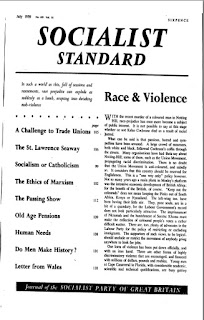 From the July 1959 issue of the Socialist Standard

One of the difficulties of Mr. Taylor's pamphlet, Is Marxism a Humanism?* is that he never seems quite sure of what he means to say and consequently we are not quite sure that he is saying what he means. His indulgence—one might say over-indulgence—in dialectical and philosophical jargon adds to the difficulty.

A conclusion he reaches, if one can say he does anything so definite as that, is that Stalinism is a distortion of Marxism but nevertheless there are elements in Marxism which lend itself to this distortion. The class morality of Marxism, he contends, is defective. Negatively it assumes a mechanistic and amoral approach for the sake of the struggle. Positively, and this is the more truly Marxist view, he further adds, its goal, which is socialised humanity, is in conflict with its own attitudes of hatred to those who oppose or refuse to associate themselves with Marxist doctrine.

It is true that the debased political morality of communists include hard lying and physical and moral liquidation, and that "the end justifies the means" is integral to the Communist ethic. But this cannot be inferred from any elements in Marxist political doctrine. Marx never suggested the personal liquidation of capitalists. Neither did he adumbrate in any way, hatred of capitalists, as a political tactic. Hate, to be effective, must to a very large extent be personified. That, and the attributing of motives to individuals, has been an important part of communist propaganda technique. Against this, Marxism as a social theory has, perhaps that any other social theory, made motives an integral part of its doctrine. Indeed it was no other than Marx himself who stated in the preface to the first edition of Capital:


To prevent possible misunderstanding, a word. I paint the capitalist and landlord in no sense, couleur de rose. But here individuals are dealt with only in so far as they are the personification of economic categories, embodiments of particular class relations and class interests. My standpoint, from which the economic formation of society is viewed as a process of natural history, can less than any other make the individual responsible for relations whose creature he socially remains, however much he may subjectively raise himself above them.

For Marx it was not the negative emotion of hate but the positive value of moral indignation which constitutes the dynamic of the Marxist ethic.

Love and Hate
As Marxists we do not hate those who are opposed to us. We do not even make bad intent or insincerity the basis of our evaluation of their ideas. It is the logic and claims of their views which we rigorously and consistently oppose. Not to do so would be a highly unethical practice.

But although hate is not and has never ben part of our ethic, we do not share Mr. Taylor's view which enjoins everybody to love everybody. Love and hate are not, as Mr. Taylor seems to think, abstract categories. It is only in a given historical context that it becomes possible to give them an ethical evaluation. Love, like any other sentiment, is a question of human relations whether it arises from sex, friendship, or mutual service and co-operation. In the vast impersonal organisation of capitalist production, where the ruling motive is ruling class profit, the impulse for genuine co-operative effort and mutual service finds no adequate human outlet. One cannot even talk about love as a positive social value between men and men in a world of buyers and sellers and where the buying and selling of men's productive capacities is the major social transaction out of which accrues private gain and advantage. Man it is true does not live by bread alone but he cannot live as truly man in a world of commodity production where the relations between men take on the aspect of relations between things.

Impoverishment
Perhaps history's greatest indictment of capitalism will not be what it has done to men economically but what it has done to them emotionally. No other social organisation has so impoverished man of his rich many-sided endowments. In the historic development of its private property relations and institutions, it has progressively stolen from human nature its powers and thoughts, tenderness and affections.

Little wonder that such deprivation made men emotionally susceptible to the fierce hates of nationalism, anti-semitism and race prejudice. That is why when Mr. Taylor talks of dealing with race-prejudice on its own terms, he fails to see that the division of labour which which alienates man from his full productive and intellectual capacities and from others of his kind, makes him a means instead of an end to the productive process with all the anti-social consequences which follow. Race prejudice, like other social prejudices, is not an isolated thing which can be treated on its own terms. Capitalism produces a vast range of prejudices which feed into each other. Given a system which offers no full development of men's productive powers and their mental, aesthetic and emotional corollaries, little wonder that unfulfilled personal development, finds compensatory outlets which often take on an anti-social character.

To call upon men to practice tolerance, goodwill and love as Mr. Taylor suggests is to utter hollow abstractions, in a world of class conflicts, national rivalries and hatred where subterfuge, chicanery and power politics are the normal way of conducting world affairs. Like the Christian's "God is Love" it is inhuman because in existing society it has no human roots.

That is why the sugary piety of abstract ethics which claim to transcend all social conflicts, serves to veil the objective nature of social reality. For that reason it is delusory, deceptive and dangerous.

Even when dealing with hatred and violence it is impossible to say, when considered in the abstract, whether they are good or bad. For one cannot say what hate or violence is in the abstract. These things, like love, can only be evaluated in a social context. Thus if people were being oppressed by a rapacious minority, hate for the oppressors would be a normal and human emotion. To love their oppressors would be an abnormal and inhuman feeling. If anyone suggested that love, non-violence and humility were the only answer to the social situation, it would be a servile and bad viewpoint. Such a viewpoint, however has always enjoyed considerable favour in the Christian ethics. If, on the other hand, hatred born of oppression produced violence, of a degree that led to a relaxation of oppression, then the means would have been consistent with the end, i.e. a lessening of the yoke of servitude.

The Marxist does not advocate violence or hatred because they are inconsistent with the end in view—a classless society of free labour and production for use. The end itself, however, determines the means.

Ends and Means
The function of the means is to overcome the obstacles which separate us from the end. Thus the real significance of any goal can only be understood in relation to the means necessary to attain it. An intelligent choice of ends can only be made when the consequence of the use of our means has been taken into consideration. If the end is a classless society consciously brought into being by the vast majority, then the means can only be helping to bring this consciousness to the required majority. Hate and violence are in this context inconsistent with these ends. To substitute then as means would mean to change the ends. That there can be no basic separation of ends and means is integral to Marx's doctrines.

Mr. Taylor's second point is what about those social elements who would have no share in a socialist society and against whom recriminatory methods would be adopted? This, he argues, is consistent with Marx's doctrine. One can only say, and this was also the view of Marx, that no one would be excluded from freely participating in socialist production. Neither did Marx say that certain social elements would be proceeded against in the event of the social revolution forthwith. He did say, and at that time there were pretty good reasons for so saying, that counter-revolutionary action would, in the interest of the vast majority, have to be vigorously dealt with, and that is quite compatible with democratic procedure.

But this is where we came in. Mr. Taylor never discusses Socialism at the Marxist level or indeed at any level. For him Russia remains the archetype of the social revolution. He appears to think that Socialism à la Communist and Trotskyist will be directed by an elite—social engineers who will blue print and shape the raw human potential into the manufactured Socialist article. On such premises, Mr. Taylor goes in for a lot of soul-searching as to what might happen to this raw material in the manufacturing process, and he discovers that it falls short of a true humanism. But his dilemma has no basis in Marx or Marxism, it is rooted in his own assumptions.

Socialism
Socialist society cannot begin until the vast majority of the dispossessed realise that capitalist property relations and the division of labour which arises from it are the real barriers which hamper and frustrate the development of the individual in the widest sense, out of the energising of their knowledge and experience they will act accordingly. Mr. Taylor is wrong when he thinks that Marxists, along with Marx, hold that the basic thing is the overthrow of capitalist relations and the devil take the hindmost. In a fundamental sense, the abolition of capitalist property relations is merely the necessary condition which makes possible the releasing of men's energies, capacities and will to re-integrate themselves in the new society.

But there will be no enlightened few, politically and economically directing the uninitiated many, because the many will have gained the social experience to direct society along the path it wishes to go. There may be in the building of socialist society much to learn, and some things to unlearn. One thing history will have taught, however, is that love, goodwill, the rights of the individual, can only have real meaning in an equalitarian and humanist society.

The Rights of Man
Mr. Taylor's concern for the individual seems to spring from the idealisation of the rights of man, as put forward by Kant and others. But the rights of man, no matter how idealistically they are framed, can never in a truly human sense be realised in capitalist society: only a socialist society can make the individual free, and this becomes possible because, in the self-conscious act of abolishing itself as a class, it abolishes all other classes. Thus, it makes possible a reversal of the historic process. In all previous epochs the individual can only assert himself through a social class. But the working class has no interests itself as a class. Their only interest is to abolish classes and become classless individuals whose free association constitutes socialistic humanity. Only in and through socialism will the individual truly come into his own. Freedom of the individual constitutes the social, one might say the moral basis of socialist society; as such it will be an enduring element in all further social development.

In spite of Mr. Taylor's wanting to fight for colonial freedom, his main position, in ambivalent contrast to these vague phrases, seems to be the advocacy of the classless ethics of Kant and Christ. We shall in another issue examine the social validity of such ethics and the place of ethics in the Marxist scheme of things and his assertion that there are more fundamental cleavages in society than class division.