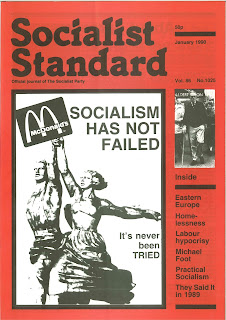 Editorial from the January 1990 issue of the Socialist Standard

The final decade of the century begins. What shall we do? Two options face us. We can have more of the same: more of the profit system where needs will only be satisfied if it benefits the rich minority to sell us access to the wealth of the Earth. Or we can choose the socialist alternative. We take the resources of the world away from the privileged few who monopolise them now and establish common ownership and democratic control of the means of life.

We take the factories, the farms, the offices, the mines, the media, transport—all of the means of producing and distributing wealth—and we say that these no longer belong to the few, but are the common possession of everyone. Instead of the buying and selling system, under which everything, including our own power to work, is regulated by markets and profits, we could abolish the market, and with it the system of wage slavery which turns work into the exploitation of workers by capitalists. We can continue to have a two-class society where those who do not produce possess and the wealth producers possess little between us, or we can abolish the anachronism of classes and live co-operatively as human beings, regardless of age, race or sex. We could work together to produce according to our many different abilities; we could take on the basis of free access from the common store of social wealth, without having to consider the obscene and ridiculous inequalities between those who are "rich" and those who are "poor". We could produce solely for use: food to eat, homes to live in, trains and planes to travel on. Just for use, not so that capitalists can accumulate more and more profit.

There is no third choice. There never has been. When the Socialist Party was formed in 1904 its founders were told by certain sincere people that, whilst they did not like the profit system and its disregard to human needs, neither did they think it possible to bring about such a huge transformation in social affairs as socialism will entail. These doubters, who called us the impossibilists, went on to waste most of this century trying to achieve what is possible for the workers under capitalism. Many of them united within the newly-formed Labour Party (or Labour Representation Committee as it called itself in those early days). They offered to the working class the naive hope of a reformed and decent version of the profit system. Their moment of victory, when government power became theirs, was the moment of cruel truth. Labour governments, as all but the most naive must now see, have done nothing but act in accordance with the dictates of the economic laws of class society.

In such a society you cannot serve both classes' interests; eight Labour governments of this century served one master, the capitalist class. A future Labour government offers no third way between capitalism and the case for socialist revolution as advocated consistently by the Socialist Party. The Labour Party should be abandoned as a useless, dishonest gang of reform-schemers who cannot deliver anything different. The new reformists of the Green Party, with their attempts to evolve a pragmatic path between a clean, balanced environment and the continuation of the market, should be forced to make the crucial choice: either they stick with supporting capitalism and drop all the radical talk, or they transcend mere radical noise-making and embrace socialism. No third way.

Socialism will only come about when there is a majority of socialists ready to take democratic action. Again, there is no other way. The Leninist myth that workers can be forced to be liberated, and then ruled oppressively by so-called proletarian dictators, has been demonstrated to be both wrong and dangerous. Workers do not need to be led: we do not require the established politicians and we do not require left-wing vanguards, like the SWP, with their patronising plans to run a new "workers' state" in our interest. If there is to be change, then the workers must bring it about. If there is to be a socialist revolution, then the majority of the working class must be in on the act.

Building a socialist majority is the task of the Socialist Party. It was in 1904, it was in 1980, it remains so and, if necessary, will still be pursued in the year 2000. Ours is the only party in this country putting forward genuine socialist ideas. We have a duty to spread them as vigorously as we can. We shall continue in the 1990s to put before the workers the plain, principled case for socialism. We shall show that capitalism is not worthy of the workers' respect or support; it is a system of legalised robbery and we, the majority, are the robbed. We shall show that socialism is not just desirable, but is practical. Our job is to apply socialist principles to the problems of everyday life and to show that the alternative will work.

We, the Socialist Party, will proceed with the urgency of men and women who know that the socialist change must be brought about before the profit system kills and injures and impoverishes countless more of our fellow workers. We will be making a noise in the 1990s; the more of us there are, the louder the noise shall be. So, what will you be doing in the 1990s, fellow worker?
Posted by Imposs1904 at 6:19 PM