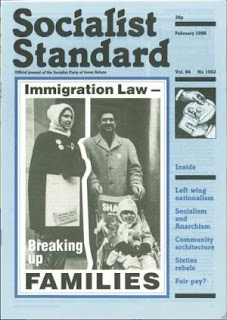 Back in the late sixties, while thuggish cops kicked hell out of anti-Vietnam war demonstrators in Grosvenor Square and the Beatles sang "you say you wanna revolution", your reviewer was quietly tripping out on Junior Disprins, listening to John Peel on pirate Radio London and occasionally paying attention to my old man who told me that Harold Wilson was no more a socialist than Bob Dylan could sing. He was right about (Lord) Wilson, wrong about Dylan and now a lot of the Grosvenor Square victims are members of the SDP and like to recall their youthful rebel days.

World In Action (8:30 pm, ITV, January 4) was all about three of those rebels of 1968. Using film clips of the heady days when lads with duffel coats and earnest expressions were going to change the world, the programme jumped on to 1988 when Thatcher reigns supreme and young trendy lefties have turned into middle-aged, compromising bores. The first was Mike Tomkinson, then President of the LSE students' union, now a man who writes for the Digger and believes that the establishment is here to stay. Second bore was Dave Clarke (no, not the one who made bad records then and no records now) who owns his own business in Docklands publishing a local newspaper. Clarke, whose line in cliches has not changed much in twenty years, is shown in 1968 declaring that violent revolution is what we must prepare for and in 1988 admitting that Thatcher's put some good old life back into the profit system and — I bet you've never heard this one - if you're not a socialist before you're twenty you have no heart but if you're a socialist after you're forty you have no brain. Dave did not explain what you are supposed to be between twenty and forty, although he seems to have maintained a sort of permanent mindless dullness throughout the whole process.

Dave looks into the camera and declares that his heart is on the left, but his wallet is on the right. The fact is, of course, that back in 1968 Dave Clarke, then President of Manchester Student's Union, was a moralising trendy with nothing to do except sloganise in accordance with the then fashionable dogma which insisted that Vietnam should win its war. Now that Vietnam has won and millions of Vietnamese workers are living under an obscene dictatorship (just as they would have done if America had won the war) Clarke is trotting out the latest fashionable tripe about Thatcher being good for "our" industry. The false message of the programme was that Clarke had changed in twenty years; the reality is that he was a capitalism-supporting fool then and he appears to be no better now.

The purpose of this programme (if TV reviewers may be so arrogant as to seek such a factor) was to show that times have changed in twenty years. For conservatives this is supposed to be a reason for good cheer: all them lefty radicals have grown up at last, what!; for leftists it is supposed to show that the good old days of the late sixties, when you could start a demo faster than Harold Wilson could light his pipe, have gone and we are now in the miserable age of Thatcherism. Socialists accept neither view. The Left in 1968 never was a threat to the system. We do not doubt that many workers matured a little politically through the struggles of those active years but that maturity came from seeing through the illusions of futile reformism, not pursuing them. What is sad - very sad, in fact — is that students in 1988 who mouth the platitudes of pseudo-revolutionary leftism have not moved beyond the moralising confusion of 1968. Twenty years ago they were rolling joints and wasting their hopes in the political haze of reformism; today the dope costs more and it's mainly young Tories who smoke it. Apart from that, the task of changing society has still to be carried out

See For Yourself (8pm, BBC1, January 3) was all about how the BBC works. It was a two-hour programme which is probably like the kind of thing they show about collective farms on Bulgarian TV. "This is the BBC making a play - this is us making the news - did you know that it takes fifteen cameras to film the golf coverage?" Well, thanks for telling us, but does it really matter to the old workers who can't afford to pay the TV licence fee out of their pension?

After the programme we were invited to phone in questions to the two men who run the BBC. One was Michael Checkland, a man who looks and sounds like a banker and seems to think that the BBC would have been better off if it went into banking. The other was Marmaduke Hussey - a man who, as if not foolishly enough named already, kept on being referred to as Dukey by Checkland. Before the calls came in Marmaduke answered a question or two from the interviewer. Had he watched the two hour programme? No - well, he'd seen a bit of it. Wise man: he was probably watching ITV at the time. But what sort of Chairman of the BBC goes on TV to answer questions on a programme most of which he has never seen? Does he watch EastEnders, the BBC's most watched programme? He had seen it a few times, said Marmaduke — and then proceeded to ask a caller from Bristol what the weather was like there because he had one of his houses round that way.

One of his houses? Marmaduke probably spends so much time travelling from one home to the next that he has precious little time to watch the telly like the rest of us. I was thinking on 'phoning up and asking why BBC news tells so many lies about "Marxist" countries — or asking why EastEnders is such insulting, anti-working-class drivel, or when it was that Marmaduke was actually elected by the viewers of the BBC to be its Chairman.


The People caves in

Readers who have been following our own little soap opera about the People newspaper's published lies about comments made in this column about soap operas will be pleased to know that the People admitted in a written reply to the Press Council that it was wrong to claim that The Socialist Party was in any way connected with the Labour Party or that we stand for socialism in one country. They have published a letter from a member of the Socialist Standard Production Committee correcting their distortion. However, as their correction was several months after the original lies had been published and as our reply was given about a tenth of the space which was given to their original article, you can draw your own conclusions about so-called press freedom. One thing can be said about the BBC: they can't be accused of twisting what The Socialist Party says — they just maintain a conspiracy of silence which began in Reith's day and shows no sign of changing in the Era of old Marmaduke.

Hat tip to Graham T. in Denmark for originally transcribing the majority of this article.