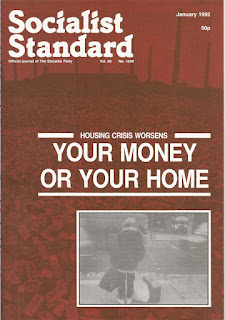 Timewasters: I
This year will see another gang of Labour fakers doing the rounds of kissing babies and promising the moon. Those who recall the records of past Labour governments will be insulted by such appeals; those who do not will be massively disillusioned if they place faith in Kinnock and Co. to build the New Jerusalem (or even a few more council flats) for them.

Those who fall for Major's smooth-talking deception about the creation of a classless society will be no less betrayed. Michael Cockerell's four part Class Rule (BBC2, Tuesdays, 9.50 pm) was a series which made great use of the archives to show how since 1945, British governments have repeatedly appealed to workers on the basis that they would abolish class, and have consistently confined such hopes to the empty realm of rhetoric.

After the Second World War Attlee defeated Churchill on what seemed to be a genuine tide of working-class desire for a more equitable society. When Labour won Hartley Shawcross is supposed to have said that "We are masters now", and Ministry of Information propagandists were paid to make films about how Britain belonged to everyone. Of course, the harsh reality of who owned Britain intervened and the Attlee government ended up using troops to smash strikes and telling the wage slaves to accept austerity for the sake of economic success -  for their bosses. Attlee was voted out and there then followed the thirteen wasted Tory years during which the aristocratic slob Churchill was removed and Macmillan, born into inherited class parasitism, posed as being an ordinary chap. The Macmillan Tories appealed to the One Nation fraud that Britain belongs to us all.

Cockerell's programme (number two in the series) showed how the Tories used sociologists to tell them that they needed to win over the skilled, aspirant workers if they were to hold on to power. In the "never had it so good" fifties the Tories built council estates for "respectable" wage slaves who would be bribed into submissive contentment. Tory MP's adopted proley tones for broadcasts which sought to depict them as just one of the lads - like vicars talking at youth clubs or Maxwell addressing his ex-employees at the pension fund meeting. It was all a disgraceful fraud. Unlike Maxwell, who had the fortune to drown before he was caught out as a transparent crook, the Tory Ministers were caught while still in office, and after Profumo the "we're all in it together" rhetoric of One-Nation Tories had an altogether hollow ring to it. In a desperate bid for sympathy the Tories appointed an unelected Prime Minister called Alec Douglas Home who did not know that feudalism had ended.

Home's undisguised condescension towards the lower orders was exploited fully by the super-opportunist Harold Wilson, a Labourite con-man who got to power by telling lies about the hardship of his miserable northern youth. (In fact, the liar had been an economics don at Oxford before taking up major criminal fraud in Westminster).

It is easy to forget that Wilson won the 1964 election on an appeal to working-class sentiments of wanting to do away with the rule of chauffeur-driven Lords and rich men. Today Wilson is a rich Lord and so is the fraud who followed him, Jim Callaghan. These lying tricksters perpetrated every known Tory stunt in their bid to run British capitalism on behalf of the minority owning class - yet it is a fact (not reported by Cockerell) that when Wilson beat George Brown for the Labour leadership in 1963 he was sent a telegram by the Central Committee of the Communist Party stating that at last a genuine socialist had become Labour leader!

Another fact missed by Cockerell, in an otherwise well-made series, was that Major was not saying anything different from Thatcher when he made his hollow promise about creating a "classless Britain". Often forgotten by political observers is a radio interview given by Thatcher in 1985 in which she said:

Under Thatcher the number of people living in official poverty more than doubled. Major's efforts will be no different from that of Thatcher or of Macmillan; and who but the most naive expects the future Lord Kinnock to be any different from Messrs Wilson and Callaghan? The lesson of the Cockerell series is that this century has been one of broken political promises and shattered working-class dreams of equality. It is time for a change.

Timewasters: II
But still the pseudo-socialists emit their poisonous ideological gas. On Question Time (BBC1, 5 December) a faceless, nameless (at least, I have forgotten) Labour MEP spewed out the same old Labour cliches about how they would re-organise capitalism. On the panel with her was Tony Benn, who thinks that it is still 1945 and that what Attlee said he was doing was true. The MEP looked at Benn like something you scrape off your shoe; he sneered at her undisguised Toryism. While Labour's soul was being fought for all whispers of a socialist revolution were strictly off the menu.

Not so the following night when Timewaster III, Anne Murphy, appeared as one of the guests on the appalling midnight Channel Four phone-in show, Ring My Bell. Murphy is a member of the Communist Party of Great Britain -  that's right, the one that folded its tents and agreed to die of shame. Murphy's crowd want to hang on to the ghost of the old Stalinist monster, and in so doing she did more harm to the case for socialism in her replies to callers than MI5 could wish to do unaided. Murphy told callers that "under" socialism workers would be paid more and that, while we might be "critical" of Ceausescu, he was the leader of a good socialist country. Murphy plans to stand against Ken Livingstone in the next General Election as a Revolutionary Communist. Perhaps the workers of Brent East can hold a competition to decide which of them comes from a more dishonorable, detestable and failed tradition.
Steve Coleman
Posted by Imposs1904 at 6:23 AM

In the original text, Coleman wrote "Like Maxwell, who had the fortune to drown before he was caught out as a transparent crook, the Tory Ministers were caught while still in office, and after Profumo the "we're all in it together" rhetoric of One-Nation Tories had an altogether hollow ring to it."

I think that 'Like' was a typo and should have been 'Unlike'. I changed it.

The mention of Anne Murphy of the Communist Party of Great Britain in the final section of the TV Review. It's not clear from the text whether or not Coleman knew that Anne Murphy's CPGB is what we now know as CPGB-PCC/Weekly Worker. A group that split from the CPGB in the early 80s, and decided to appropriate the name when Nina Temple and others decided to give up the ghost and rename the official CPGB, Democratic Left.

For the record, Murphy did stand against Livingstone in Brent East in the 1992 General Election. She received 96 votes (0.3% of the vote). A kindred soul. She remains to this day a longstanding and active member of the Weekly Worker group.