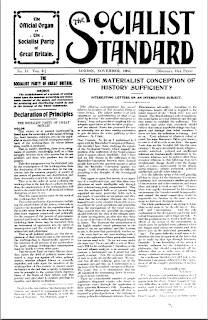 From the November 1905 issue of the Socialist Standard

As against those professing Socialists who endeavour to secure the kudos and advertisement attaching to the identification with their position of individuals who have, by diverse methods, attained to prominence in the public eye, we are concerned that the message we bring to the working-class shall be assessed on its own merits. Just as we, knowing its harmfulness as well as its futility, are opposed to the endeavour to obtain support for Socialism by tactics of compromise and the propagation of something less than Socialism, so we are opposed to the endeavour to create for Socialism a standing of greater "respectability" by covering it with the glamour of great names—whether of monarchical countesses or mystic counts. Hence the publication in another column of the letter from Tolstoy.

Tolstoy's disclaimer may come as an awkward pronouncement to those notoriety-mongers who, having claimed to be Socialists, have claimed Count Tolstoy for their supporter and widely advertised the connection. Tolstoy, of course, is simply a Christist who has failed to understand—because perhaps he never studied—the materialist basis to human thought and activity and who thinks that human loves and hates can be divorced from material conditions when, of course, it is precisely the material motive—the desire for material improvement and the methods of realising it—that brought men into association, into groups and tribes and nations, an association that has given birth to, and moulded, their thoughts and aspirations, their loves and and hates and fears.

Generally speaking, man's capacity to love his neighbour will depend upon the economic relationship of both. It is sheer fatuity to expect one to love the other when they are mutually engaged in a grim struggle for the wherewithal to live, a struggle that the conditions governing industry forces upon them. A man may understand that industrial conditions render it impossible for his fellow to do other than battle with him for bread, but he cannot love unless it is possible to conceive of a love that finds expression in a fight in no respect dissimilar from the fight between men who hate and hate whole-heartedly. The law of self preservation impels the fight and the lesson is soon learnt that the victory is to the best hater rather than the best lover. It is quite possible that the participants in the struggle may prefer to love each other, but they will understand if they give heed to the Socialist that the only way by which love can be made possible is through the removal of the conditions that necessitate hate. They must first of all remove the conditions that set them at each other's throat. Tolstoy has laid hold of the wrong end of the problem, and it is because his gospel can only have mischievous effects upon the endeavours we are making to organise the working-class upon the basis of class interests, that we take the opportunity this letter affords to make it clear, upon his own showing, that he is outside the Socialist movement at the same time that we echo the quaintly worded regret of our Japanese comrades that "Tolstoy is yet in error as to Socialism and the solution of social problems just in the same way as the common shallow people do."
Posted by Imposs1904 at 7:50 PM