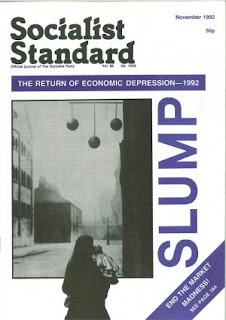 From the November 1992 issue of the Socialist Standard

The notion that the price mechanism is the most efficient allocator of resources took a further blow recently with the confirmation that Britain has a massive "oversupply" of bricks, concrete blocks and other building materials and a deepening housing crisis.

Despite increased homelessness, record levels of house repossession and rising council house waiting lists throughout the country, figures released by the Department of the Environment and leading construction companies show the house-building industry to be still in severe slump.

The output of the construction industry is now five percent lower that it was in the second quarter of last year, itself a period of sharp downturn. Redundancies have escalated and the industry's workforce has fallen by a further 13 percent over the last year.

The brick-making sector of the construction industry has been particularly badly hit. According to the Daily Telegraph (12 September), the major construction firm Tarmac is to close four plants producing a total of 100 million bricks a year, while concrete block factories in Nuneaton, Dumfries, Fleet and Bracknell also face shutdown.

With the decline in paying demand total UK brick sales have fallen from a peak of 4,270 million in 1988 to an estimated 3,100 million for 1992. Meanwhile, as homelessness continued to rise 1,473 million of brick stocks built up last year, the price mechanism once again demonstrating its inability to marry production with real human demand—in hosing as in other sectors of the economy.

The gulf between the total productive capacity capable of meeting human needs and the actual utilization of productive forces to meet paying demand in capitalism has been highlighted by, ironically enough, stockbroking firm BZW. They have estimated that despite rising real needs for housing, paying market demand in the building sector for materials is back to the level of 1986, when construction was just emerging from the previous slump of the early 1980s.

Furthermore, BZW estimate there to be excess productive capacity of 20 percent in the brick industry, 42 percent in ready-mixed concrete, 38 percent in crushed rock, 35 percent in plasterboard, 26 percent in both concrete blocks and roof tiles, and 25 percent in cement.

Bizarre though it may seem to rational individuals, some supporters of capitalism consider their system to be highly efficient, incorporating the best system of distribution known to humankind. But what sort of efficiency piles up stocks of useful materials and imposes market penalties, i.e. loss of profitability, as a disincentive to utilize an artificially "excess" capacity?

Though it is a good example, the construction industry is not, of course, alone in demonstrating the absurdity of the capitalist system of production. Most spheres of manufacturing are now faced with declining or static market demand, with wholesalers and retailers cutting back on orders as stocks of unsold goods pile up. According to a recent CBI survey, 63 percent of wholesalers are cutting back on their orders from manufacturing, while 45 percent of retailers are reducing orders from their suppliers (Guardian, 11 September).

This crazy situation of overcapacity and falling paying demand for commodities amidst increasing need, poverty, homelessness, and—in the "Third World"—mass starvation, has to be ended. And the sooner the better. The madness of the market will have to give way to a co-ordinated system of production for use, with free access to the goods, materials and services available to society.

It's time to put capitalism out of its misery and thereby help put us—the world working class—out of ours.