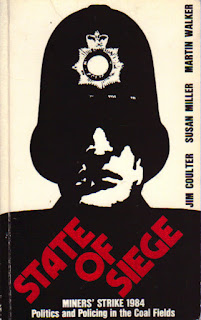 Book Review from the October 1985 issue of the Socialist Standard

Moira Abdel-Rahim, Strike Breaking in Essex: The policing of Wivenhoe and the Essex ports during the 1984 miners' strike. Canary Press

The 1984/85 coal strike met with a massive response from the state, most notably the drafting into the coalfields of thousands of policemen from other areas under the mutual aid arrangements. But this was not the only part of the state machinery mobilised against the striking miners: the criminal justice system was used to restrict the activities of trade unionists through the imposition of bail conditions and bind over orders; the civil courts used injunctions to sequestrate union funds; other nationalised industries took action that severely limited the effects of the miners' action (for example the CEGB burned oil instead of coal in power stations); and the DHSS tried to starve miners back to work by withholding benefit from their families. But it was the police who were the state's front line in its attack on striking miners. Their activities caused widespread outcry among those concerned about civil liberties and led to a number of instant books commenting on the policing of the dispute, some published before the strike had ended.

State of Siege originally appeared in the form of three pamphlets, the first appearing just weeks after the start of the dispute. This book is a compilation of those earlier publications and it documents, in essentially anecdotal form, the most outrageous activities of the police over the period of the first five months of the strike. Because it was written as the events happened, the material is often unsystematic and lacking in coherence (which the authors themselves admit). This type of approach means that their arguments are frequently unpersuasive since they lack hard evidence to back them up. Anecdotal accounts of ill treatment by the police, for example, can be too easily dismissed as isolated occurrences not representative of the policing operation as a whole.

Similarly the authors' allegations that the police are being turned into a "paramilitary Third Force", although they carry some weight in view of the widespread use of riot trained police during the strike, can begin to sound like an hysterical over-reaction. One of the central problems with the book's approach is that the authors seem to want to argue that the growth of the "strong state" is both a feature of Thatcher's Britain and also nothing new. So although they place the events of this dispute in the broader context of a long history of brutal state reactions to working-class militancy, at times they also imply that there was something unique about this particular struggle. They write:


The miners' strike has come about because of the brutal economic policies of a Conservative government (p. 3).

This is not true: the events leading up to the strike were the result of the internal logic of capitalism—that production takes place only for the purpose of making a profit, and any industry that is not deemed sufficiently profitable will be closed—and this is the case no matter what shade of capitalist political party happens to be in government.

The authors' admiration for the efforts of miners to organise themselves during the strike and their justifiable sense of outrage at the treatment repeatedly meted out to them is tinged with the tendency to depict miners as proto-revolutionaries, which they clearly were not. While the strike may have challenged the employers inevitably it was on their own ground, namely that of capitalism; no strike can attempt to move the struggle to different ground — a political struggle for socialism. Despite the rhetoric this was, after all, yet another manifestation of the daily class struggle between worker and capitalists, albeit a particularly long and bitter one.

Despite its shortcomings, State of Siege does graphically illustrate a whole range of state activities during the strike: the use of the National Reporting centre to centralise control of the police and co-ordinate their operations; the use of the criminal rather than the civil law against pickets in an attempt to criminalise and discredit them; the setting up of police road blocks that made a nonsense of the notion of "freedom of movement"; the collecting by police and the Special Branch of political intelligence on strikers and trade union leaders; and physical and verbal abuse by police to harass and intimidate miners and their families.

Looking to the future the authors identify the following causes for concern: the inadequacy of the police complaints system; the extension of police powers under the Police and Criminal Evidence Act, 1984 and the proposed changes in the law relating to Public Order. Underlying their recommendations and observations seems to be the idea that humanitarian policing is possible—"policing by consent" as it is usually called. This misses the point about the role of the police, and the coercive state machinery in general, in upholding and protecting the interests of the capitalist class; the idea of impartial policing or "policing by consent" is absurd. The consent of the workers is obtained while the system twists one of their arms up behind them; it is the consent of people who believe that they have no option but to consent.

Strike Breaking in Essex is written in a somewhat similar style to State of Siege although its particular focus is the picketing of the five small ports in Essex which were used to import coal. Because its subject is narrower it offers a more detailed and comprehensive account than State of Siege and is more systematic in approach. It deals firstly with the background to the events that occurred at the five Essex ports, then goes on to give a detailed account of the policing operation in the Essex area and finally discusses the wider implications of the way in which the dispute was policed for the Essex community. But despite this more systematic approach again there is evidence of a lack of political understanding, as for example when the author writes:


The miners have been fighting for their jobs, their communities and a voice in their future. They are now the vanguard of the British working class. If they are to be crushed, trade unionism and the labour movement will have suffered a serious blow.

Again, the author is confusing a trade union struggle over industrial and economic issues with revolutionary political action.

Both of these books draw attention in graphic style to the use of state power by the capitalist class to protect its own interests in the face of a perceived threat from the working class. The coercive nature of state power is generally kept reasonably well hidden — it is far more effective for workers to believe that they are "consenting" to a given situation rather than being coerced into accepting it. But it should nevertheless be remembered that coercive power — the "iron fist" — can and will be used if necessary. Both books rightly draw attention to this use of coercion, apparently understand its function in protecting class interests, and yet still persist in the naive and mistaken view that policing can be reformed in such a way as to make it in some way less coercive. State of Siege at the end of the first section (p. 59) recommends the setting up of committees of enquiry to look into the use of the criminal law; the role of the Association of Chief Police Officers; and covert employment of paramilitary strategies during the strike. After the catalogue of abuses by the state which they present us with, are we really supposed to believe that a series of committees of enquiry (themselves a part of the state machinery) are going to recommend reforming the police in such a way that such abuses will never occur again? This is precisely the sort of recommendation that one expects from politicians who wish to avoid capitalism's realities and is at best naive and at worst politically dangerous.