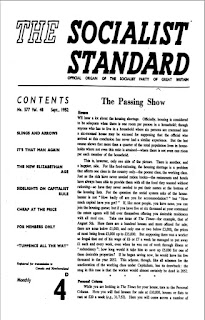 Editorial from the September 1952 issue of the Socialist Standard

One of the themes of Mr. Harold Nicolson's biography of the late King George V is that he showed a good grasp of problems of government and, indeed, the examples quoted do seem to indicate that he often displayed more insight and level-headedness than some of the leading politicians. But what is the major problem of the governments of capitalism? It is of course to keep the working class as far as possible satisfied with the system under which they are exploited, and if they can't be kept satisfied, at least to keep them quiet. One example selected by a Manchester Guardian reviewer is George V's handling of the political crisis which brought down MacDonald's Labour Government in 1931 and led to the formation of a “national” three party government with MacDonald as Prime Minister.

During the crisis the King interviewed the leader of the Liberals Sir Herbert Samuel and according to Mr. Nicolson's account this is what was said:-

Sir Herbert "told the King that, in view of the fact that the necessary economies would prove most unpalatable to the working-class, it would be to the general interest if they could be imposed by a Labour Government. The best solution would be if Mr. Ramsay MacDonald, either with his present or with a reconstituted Labour Cabinet, could propose the economies required. If he failed to secure the support of a sufficient number of his colleagues, then the best alternative would be a National Government composed of members of the three parties."

Further information was given by Sir Oliver Wigram in his record of a later discussion with the King. He says that the King found:-

When MacDonald went to see the King to tell him that “all was up” with the Labour Government, the King impressed on him “that he was the only man to lead the country through this crisis and he hoped he would reconsider the situation.”

It would certainly seem that Sir Herbert Samuel (now Viscount Samuel) had a very shrewd idea of the part a Labour Government can play in keeping capitalism on an even keel.

The fact that we should have had to wait until now to know what arguments Samuel was using to try to keep a Labour Government in office in 1931 gives point to the recent controversy about the practice of Ministers maintaining secrecy on the discussions that go on inside the Cabinet.

In letters and articles in the Press various views have been expressed on the issue that arose between Mr. Bevan and Mr. Attlee on this question but it was left to Mr. W. Harvey Moore, Q.C., to suggest in a letter to The Times (16/8/52) that "secrecy is an evil, and knowledge and criticism of the actions of politicians is essential in a true democracy . . . The ordinary man who has to suffer for the mistakes of those who govern him is entitled to know 'the truth, the whole truth and nothing but the truth.'"

Mr. Moore mentions the countries beyond the "Iron Curtain" where any disclosure of facts that may be discreditable to members of the Government is regarded as treasonable and he thinks any tendency in that direction should be avoided in this country.

But as we live in a capitalist world where war and the threat of war are always with us he has to make an exception of strategic secrets that may be useful to a potential enemy.

On the same day (16th August 1952) the Manchester Guardian had two editorials, one on the British workers and the other on the workers in Czechoslovakia, and what a difference of outlook they displayed. The first criticised the British trade unions that are pressing for higher wages and threatening a ban on overtime to meet dismissals. The Guardian's argument here is that if British prices are not kept down British exports will be riven out of world markets by the competition of countries with cheaper products.

In the second article the Guardian related that the Communists who govern in Czechoslovakia are complaining in like manner of the workers there. The Czechoslovak Prime Minister complains of irresponsibility and indolence on the part of the trade unions and describes as traitors the workers who resist having to work more than eight hours a day. On the hours question the Guardian writer makes the jibe that the Communists regard it as a righteous desire if workers in the West want shorter hours, but regard it as criminal if workers in the "Peoples' Democracies" have the same desire. The jibe strikes home, but it also hits the Manchester Guardian, whose sour condemnation of British workers contrasts markedly with its evident satisfaction that the Czechoslovak Communist is in trouble with its own workers.

It is particularly interesting to notice that in Britain the workers who threaten to strike for higher wages when the Government says they shouldn't are suspected of being "communist" inspired, while the Czechoslovak workers who do the same are accused by their Communist Prime Minister of being "traitors and diversionists" in the pay of Western capitalists or "captives of bourgeois ideologies." Thus the Government of the two halves of the capitalist world play exactly the same game, of seeking to divide the workers on National lines. The workers answer ought to be that of uniting internationally so that the working class of all countries could stand together against its exploiters and work together for the removal of capitalism and establishment of Socialism. But that would displease equally the Manchester Guardian and the Czechoslovak Government.
Posted by Imposs1904 at 10:07 PM