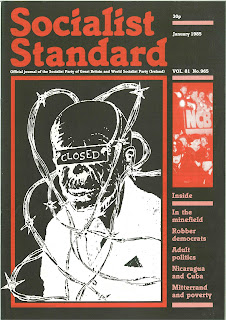 For years Nicaragua was run by the Somoza family who, in return for maintaing "order", so that the exploitation of the peasants by US multinationals could continue in relative peace, were allowed to help themselves to some of the pickings of this exploitation. In the end the greed and corruption of this bunch of gangsters became too much even for the rest of the parasite class in Nicaragua, who threw in their lot with the Sandinista guerrilla movement (so called after a Nicaraguan general, Augusto Sandino, who led an anti-American and pro-peasant revolt in the late 1920s and early 1930s):


The enormous fortune of the Somozas had coexisted peacefully with the investments of the country's other businessmen until, following the 1972 earthquake, the Somoza family took over banking and construction, two fields considered as the preserve of the country's well-off class. From then on frictions appeared which ended in a break between the capitalists and General Somoza and in a union of capitalists with the young people who had taken up arms under the banner of the Sandinist National Liberation Front. (Républicain Lorrain, 18 July 1979)

Within a few years of the overthrow of the Somozas in July 1979 power came to be exercised exclusively by the leaders of the Sandinist movement with most, but by no means all, the private capitalists and their supporters going over to the counter-revolution encourage, financed and armed by the US government.

Even if we assume that the leaders of the Sandinist movement who now occupy the top government and state posts in Nicaragua do not attribute themselves a privileged income compared with the rest of the population (which may be the case, to a certain extent) they are still compelled, by virtue of the fact that they are administering a state in the context of the capitalist world economy, to behave as a capitalist class.

Thus, they are forced to oblige peasants to grow cash crops for export, as a means to get foreign 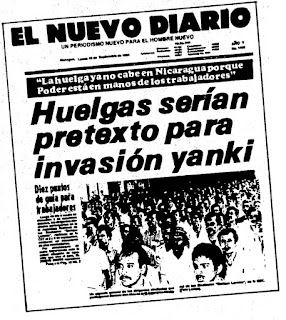 currency (to buy machinery and arms), rather than allowing them to grow food to feed themselves. Thus, they are forced to brigade the workers into state-controlled "trade unions" and to denounce strikes as counter-revolutionary. In this respect, see the front page we reproduce here of of an official Sandinist newspaper whose headline reads: STRIKES WOULD BE AN EXCUSE FOR A YANKEE INVASION! The subtitle in white on black reads: "The strike is not necessary in Nicaragua because power is in the hands of the workers", exactly the same argument used by the rulers of state capitalist Russia and East Europe. In reality it is precisely the fact that the workers in Nicaragua have to sell their ability to work to an employer, private or state, for a wage or salary that shows both that they don't exercise power and that they need the strike weapon to defend themselves.

So, even without calling into doubt the sincerity of (most of) the Sandinist leaders and of those who support them in Nicaragua — by all accounts they do seem to genuinely wish to improve the lot of the ordinary people living there — the fact remains that there is no hope for the people of the so-called Third World as long as capitalism, in the form of the world market economy, remains the dominant world system. Their standard of living and their freedom will remain restricted either by a government operating openly in the interest of native and foreign private capitalists or, if a revolution occurs to try to free them from this oppression, by the very leaders of this revolution however sincere or well-meaning they might be (for the experience of such revolutions shows that in time leaders evolve, after eliminating any genuinely sincere elements among them, into a self-conscious, cynical and hypocritical ruling and privileged class.)

The only hope for the people of the Third World is a world socialist revolution to replace existing world capitalism. Until this happens capitalism will remain in existence in the Third World, either in the form of private capitalism under some corrupt and authoritarian government or in the form of state capitalism under the dictatorship of a vanguard party. In other words, even if they take up arms against such brutal dictators as Batista, Somoza or Pinochet, the most they can achieve is a new class society of state capitalism, not a classless society without exploitation.