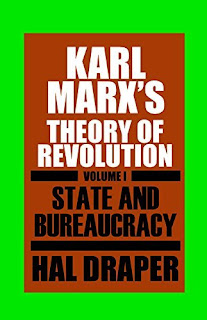 Book Review from the November 1979 issue of the Socialist Standard

This is an interesting book by the man who wrote the very useful study of Marx's references to the 'dictatorship of the proletariat' which confirmed the view we had long held. In New Politics, Vol. 1, No.4, Summer 1962, he shows that the phrase was used by Marx comparatively rarely and, when it was, to mean simply the democratic exercise of political power by the working class.

In this new book, Draper is arguing a case which cannot be fully understood without some knowledge of his background. He is a Trotskyist, but of the dissident variety known to other Trotskyist sects as 'the Shachtmanites'. During the great controversy on the nature of Russian society in the American Trotskyist movement just before the last war, three views emerged: 1) that Russia was a 'degenerate Workers' State', the view of Trotsky himself and the Trotskyist orthodoxy to this day; 2) that it was state capitalist; and 3) that it was neither a 'Workers' State' nor state capitalism but a new exploiting class society which Shachtman, borrowing a term from Bruno Rizzi, called 'bureaucratic collectivism'. Draper was for years a leading figure in the Shachtmanite tendency which existed as an independent group until 1958 when its members joined the reformist SP of America.

So in showing that Marx held that a state bureaucracy could be a ruling class and that a class society could exist on the basis of the state monopoly of the means of production, Draper is demolishing one of the arguments used by orthodox Trotskyists to defend their preposterous theory about Russia, Marx not only admitted this as a theoretical possibility but used the terms 'Asiatic mode of production' and 'Oriental despotism' to describe just such a society as had existed in ancient times, and not just in Asia. The ruling class had then been a state bureaucracy, controlling the means of production and hence collectively monopolising them. The parallel with present-day Russia is obvious; though not, of course, with regard to the mode of production itself (which is capitalism).

In The Communist Manifesto Marx and Engels referred to the 'executive of the modern State' as 'but a committee for managing the common affairs of the whole bourgeoisie'. Draper warns that, if taken too literally to mean that the government is always directly controlled by the capitalist class, then this is an oversimplification; there are cases where the government, though still used in the interest of the capitalist class, is not actually controlled by them.

Marx in fact devoted quite a bit of time to studying one such case: the Second French Empire (1852-1870). Napoleon's nephew, Louis Bonaparte, had been elected President of the Republic established in 1848 after the overthrow of the bourgeois King Louis Philippe. In 1851 he staged a coup d'etat and a year later had himself proclaimed Emperor (the events are written up in Marx's inimitable journalistic style in the pamphlet The Eighteenth Brumaire of Louis Bonaparte). Here was an example of a capitalist society where the government was not controlled by the capitalist class through a parliament, elections and so on, but by a dictator not subject to their control even if he did protect their interests. Marx called this phenomenon 'Bonapartism', and Engels argued that Bismarckian Germany exhibited similar characteristics. This phenomenon—where the capitalist class has been prepared, sometimes even compelled (sections of it, at least) to surrender political control of the government through representative institutions in exchange for the law and order imposed by a strong dictatorship — has been fairly widespread since, from fascist Italy, Nazi Germany and Franco Spain to the present-day dictatorships in Chile and Argentina.

Of course, such dictatorships are still governments of capitalism and have to run capitalism in the only way it can be; as a profit-making system and so ultimately in the interests of the capitalist class. Thus Draper's conclusion about Marx's theory of the state, not just in capitalism but in class societies generally, is fair enough (the quotes are from Engels):


The state, 'necessary and logical product of the [given] social conditions', is always in the last analysis 'the executor of the economic necessities of the national situation'. Thus it is always the organizer of society in the interests of the class (exploitative) structure taken as a whole.

One criticism. As a Trotskyist, even if an unorthodox one, Draper still believes in a 'Workers' State' (a term never used by Marx himself), and he sometimes seems too keen to play down the the anti-state element in Marx's thinking. Certainly Marx thought that the working class should use the state to abolish capitalism, but this was to be a temporary affair leading fairly rapidly to the dismantling of the state and the establishment of a stateless socialist society.