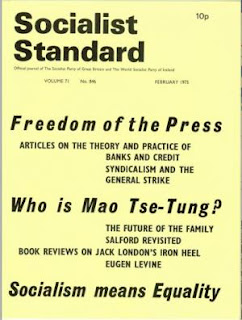 From the February 1975 issue of the Socialist Standard

Among the reasons given by the Women’s Liberation movement for the continuation of capitalism is the odd notion that the system is held up by the family. If we could break up the “nuclear” family capitalism would collapse! A corollary to this idea is that life in communes would be much better for everyone.

It is not our purpose to give a detailed history of the family but we cannot look at the possible future pattern of family life without some comment on its past. The changes in the form of the family have in general corresponded to the main stages in human development. Group marriage was appropriate to early tribal society but with the gradual introduction of more marriage restrictions gave way to the pairing family of the lower-stage barbarians. Women still made an important contribution to the collective economy and were respected members of the community.

Men had been the hunters—not a suitable role for the childbearing sex. Later, as hunting gave way to stockbreeding, that too was a male responsibility. When the plough welded together cultivation and stockbreeding women were deprived of their monopoly over the cereal crops and their social status. The rise of private ownership meant the breakdown of the clan structure. The patriarch had to be sure that his herd or flock his wealth, passed to his sons. Hence monogamy—at least for women.

These broad changes have encompassed a wide range of marriage customs. Human progress has not proceeded at a uniform rate, practices observed being tempered by local tradition and social level. The strict seclusion of Greek wives in antiquity did not apply to poor countrywomen. In the more recent past, while marriages were arranged for the wealthy, a jump over the broomstick could suffice for railway navvies. The wives of rising merchants and industrialists might be little more than ornaments in their husbands homes; but for the working class long grueling hours spent in factories, or down mines, left little time or energy for aught but the simplest meal and sleep.

For centuries women were economically productive in the home. Now water comes from a tap. We can switch on heat and light and buy oven-ready food and factory-made clothes. Work, health, education, and recreation are all provided for outside the home. The functions left to the modern family are home care, sex and child rearing. Much of the dissatisfaction with the family stems from the limitations placed on women by their involvement with housework and child care. Part of the reason for this kind of objection is the money and status valuation which is applied to all work. Rearrange the family as you will, while capitalism lasts you will be bound by the restrictions imposed by economic necessity.

Even an immediate change to Socialism will leave the family much the same as it is now. The idea that we would all pack up and leave our present partners is laughable. In any case the Socialist revolution will make it possible to sort out the mess left by capitalism. It will not wave a magic wand to perfection. One certainty about those early years is that they will be busy.

However there will come a time when the world community is long accustomed to the common ownership and democratic control of the earth and its resources. About the kind of family group appropriate to those halcyon days we can only guess! Let us do just that.

We cannot see any reason why all aspects of present- day marriage must be thrown out. Because we personally reject some concepts does not mean that everyone else will share our ideas. The writer views with horror the suggestions by Bebel and others that the private kitchen will disappear and that there will be “public restaurants and central kitchens to which everybody may come to take their meals”. This may be your choice!

The lack of restrictions at an earlier stage of human development did not necessarily imply “an injudicious pell-mell intercourse”. (They were probably too busy looking for food!) Likewise freedom from legal and financial ties is unlikely to herald the end of long-term relationships. Individual men and women who feel a mutual attraction (love?) will live together and for so long as they both wish. We do not suggest that all such relationships will be for life or necessarily exclusive. However, personal relationships do entail responsibilities.

Families, or other groups, will not be filed away as separate units. People being integrated into the community, belonging to the community does not have to mean living cheek-by-jowl in an undifferentiated mass! Rather, a mixture of private and communal life in accordance with individual choice.

Whatever else about our behaviour may be the result of social conditioning, the childbearing role of the female sex is entirely due to natural causes. This role may not appeal to all women but even today, surprising as it may be to some, mothers actually enjoy caring for their babies. It is the combination of problems involved, coping with children alone, in bad housing conditions, with money worries, or simply trying to keep up with some impossible child care standards, which now erodes the pleasure from motherhood. Children thrive in a variety of conditions but they do need a fair amount of individual attention. Though parents will not regard their offspring as possessions born to them. They will certainly not have to do so in isolation nor need it be the sole occupation of women (or men).

Men and women will co-operate to fulfil the needs of Socialist society. Necessary work is likely to occupy fewer hours than it does for most people now. Work freed from the indignity of employment will not be seen as separate from leisure, or education, but as part of our total existence. All tasks necessary to human wellbeing will have equal status. There will just be jobs which need to be done whether inside or outside the home.

To make quite clear the social position that women will occupy, we must point out that every human being will have the equal right of free access to the abundant social produce. What possible motive would there be for any group to hold another in subjection?

Sadly, the exact form the family of the future will take must for the moment be left to the realms of conjecture. It is not the family as such which prevents the abolition of capitalism but a lack of Socialist understanding among its members. When an immense majority of working-class men and women are armed with that understanding, they will not hesitate to take the conscious political action necessary to end capitalism.

This is our immediate task. Posterity will then take care of itself.