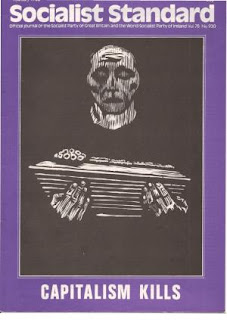 From the February 1982 issue of the Socialist Standard

I trudge off to my weekly rendezvous with the man at the Buroo, who had sent me a letter saying “we are concerned, as no doubt you are, about your continued unemployment . . I mull over some of the things he has been saying over the past few weeks: the concern for my well-being, the “helpful suggestions” on how to find employment and how I should “have no difficulty with interviews”.

It occurs to me that the blame for my predicament is being put on me. The letters I now receive when I miss one of those meetings contain blunt, as well as subtle, threats. I feel that some vile crescendo is being worked up against me by this Causa Nostra of officialdom: a terrible Day of Reckoning. I have always had this feeling, even when in employment. Yet I am not paranoid. My fears are based on experience: one can be sacked from jobs and benefit can be stopped when one does not attend interrogation—I mean interview sessions—at the DHSS. However I digress, as what I feel or how I think is of no importance to these official Mafiosi. I then think that I am taking things too personally; to them it is probably “purely business, nothing personal”.

This man I must speak with today is probably just as bored as I am with our little “chats”. He does try to be an affable character, and like me is a victim of his poverty. Just another worker—except that his house probably does not leak and doesn't have a bedroom in which the fungi flourish. Furthermore, if he wants to keep living in his house, he has to keep doing this dull, dull job. (He too has the fear of the sack.)

He can be extremely delicate in his selection of words, but notwithstanding this, I must stop being “nice” to him. For too long have I quietly listened to his naive interpretation of events. Today I will tell him what I really think. (I had thought of telling him that 1 was terminally ill to get him off my back, but after a decent interval had elapsed, he would be sending me letters demanding to know why I was not dead and, worst of all, why I was still claiming “Benefit”.) He usually asks me why I thought it was difficult to find work, and he phrased the question differently each time. He seemed to be obsessed by this question, and always returned to it. There is no doubt he saw it as one of life’s great mysteries and no doubt he would return to this theme today.

I rehearsed in my mind how I would answer him. I would inform him of the millions of other workers on the dole, as though this knowledge had only just come to my attention. I would, in a casual fashion, introduce him to the fact that capitalism is in a slump and that when this happens workers are thrown on the dole because the commodities they have been producing cannot be sold profitably in the same quantities as before; and, as the capitalists need to change their commodities into money to realise the surplus value (unpaid labour) contained in them, this unfortunate turn of events means that production must be curtailed.

When this happens in fairly large sections of industry, other sectors are similarly affected. A fall in demand for motor cars affects tyre manufacturers and the steel industry, which in turn affects the coal and petrochemical industries which, in any case, are already affected due to less demand for PVC and other polymer plastics used extensively in producing motor cars. The list of causes and effects, and effects becoming new causes of other effects, is endless.

However, in returning to my particular problem, I decided that I would inform this SS interrogator that the difficulty in obtaining employment is not resolved simply by making greater efforts to find work. (He has suggested ways of improving my “interview technique” and has given other unsolicited advice such as “getting to know something about the company involved” before interviews. Such suggestions could, at best, only help to secure a job already in existence, but could not create one which is not already there.)

This idea presupposes that employment is available if only the unemployed would look for and find it. This is an idea propagated by certain capitalist politicians such as Tebbit who urges us on to the streets—not to the barricades, but onto bikes. This simplistic notion in which Tebbit and his SS men believe (or at least pretend to believe) is not true.

The unemployed are not allowed to work at the present time. It is the capitalist class who decide whether or not, and in what circumstances, workers will work and in the present slump they have in effect told certain workers: “Go home! We don’t need you. Wait there until we need you again”.

The important fact in relation to unemployment, I will tell him, is that we live in a world in which it is now possible to satisfy everybody’s needs but the present (capitalist) mode of production prevents this potential super-abundance being realised. Unemployment is therefore only one example of capitalism’s inability to use its resources for the benefit of the whole community. The wealth that could be produced by the world’s unemployed would be very useful to the millions of impoverished people were it to be used to satisfy human needs.

But capitalism does not, and cannot, work that way.

I will tell him that, having made all these discoveries and having realised that a potential for super-abundance exists, it follows that the way to make this abundance a reality is to get rid of that which stands in its way: the capitalist system itself. In answer to his question, I will inform my interrogator that capitalism with its periodic and inherent crises is what makes it “difficult to find work” and that my unemployment (and that of everyone else) can be abolished by the abolition of capitalism and the establishment of socialism. This will involve also the abolition of employment, as there will no longer be a capitalist class and a working class. The people will still be there, but they will not belong to a particular class, as socialism will necessarily involve the abolition of classes and with it the exploitation of one class by another. Socialism, I will explain, will be:


A community of free individuals, carrying on their work with the means of production in common, in which the labour power of all the different individuals is consciously applied as the combined labour power of the community. (Capital, Vol. l, Ch. 1.)

Socialism means a world without wages, prices and profits; a world without P45s, UBL18s, UB40s, A14Ns, U12s and all the other paraphernalia.of capitalism. Socialism will enable human beings to live in a society in which production will be carried on in accordance with the principle “From each according to his ability, to each according to his needs”.

While trying to organise in my mind an exposition of the Labour Theory of Value, I arrived at the office. After exchanging the usual meaningless pleasantries, the question horribly arose: “What difficulties have you found recently in looking for work”, I gave him the answer I had prepared. He said I had “an alarming attitude”