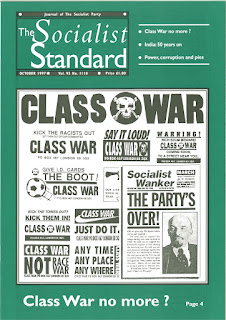 The profit system offers us work that is at best useless and at worst harmful.

Governments are elected to run capitalism. They don’t like paying "benefit" to people who could be employed turning capital investment into profit. Men and women who receive "benefit” (whether unemployment, sickness, invalidity, or whatever) are a drain on the profit system. Never mind that the owners of the means of wealth production are themselves a drain on the rest of us who do all the world's useful work.

To save money for the taxpayer the previous government introduced a test to weed out what it called benefit cheats. According to an unpublished report quoted in the Big Issue (2-8 June), 198,500 out of 785,000 people examined were denied benefit between April 1995 and September 1996. Many claimants failed the “all work" test.

There are, unfortunately, plenty of examples today of the first kind of work. There is the legally authorised killing and injuring of "the enemy" by members of the armed forces and the whole paraphernalia of occupations and "enterprises" which have violence as their end product or reason for existence: the arms manufacturers, the arms dealers, the plotters and planners, the spies and counter-spies, the propagandists, the war correspondents, and so on. Apart from a few psychopaths drawn to such destructive occupations, the people involved are mostly ordinary, respectable citizens, honest, law-abiding, kind to children and animals. It is the profit system, organised within potentially if not actually hostile nation-states, that requires such work to be done.

Besides work that is harmful to others, there is work that causes harm to those who engage in it. Coal-mining is a greatly reduced industry in Britain, but many miners in other countries still have to risk their lives and their health in dangerous working environments. Ironically, some work undertaken by members of the ruling class can be harmful to them if indulged in excessively. The Evening Standard (25 June) reported that the Duke of Westminster, with his estimate £1.65 billion mega-fortune, had been ordered by his doctors to take three months off from "running his business affairs and his work for 160 charities". Of course the big difference between the Duke and the millions of real workers is that they have to find an employer or rely on state charity, whereas he can choose whether or not to work shuffling money around.

The third kind of work is that which is really useful, producing goods or services which people actually need: producing and distributing food, making clothes and furniture, building and repairing homes, schools and hospitals, teaching, healing the sick, and so on. It is difficult to estimate what proportion of all employment in capitalism is useful—work that would still be done in a socialist world. A generous estimate would be half, but the true figure may be 20 percent or less. In our pamphlet Socialism as a Practical Alternative we discuss how we can eliminate the waste of capitalism and choose productive methods appropriate to socialism.

People who have to do harmful or useless work for a living are encouraged to believe that they have no choice in the "real world", dominated by the system that is endorsed by the voters at periodic elections. A first step towards socialism is to stop believing that this capitalist “real world" is inevitable. It’s a good idea to make the best of any job you have to work at, whether its end-product or service is worthy or worthless. But it's not a good idea to pretend that a "nothing" job—doing it only in the service of capital—is any better than it is.

Some years ago— 1968 to be precise— Ronald Fraser edited a book on Work: Twenty Personal Accounts. The accounts make fascinating reading, many of them offering a powerful indictment of the waste of life involved in capitalist employment. Take the night-watchman, for example. He describes his job as "guarding the sleep of capital". Producing nothing, this labour exists to make nothing happen, its aim is emptiness. The night-watchman has the sensation of being turned into an object, a labouring material thing. Demanding no part of himself, the job in fact demands everything, on the lowest possible level.

Studs Terkel, an American writer, is best known for his book on Working, subtitled "people talk about what they do all day and how they feel about what they do". Listen to the automobile salesman: "The public thinks the automobile salesman is a rat. Some of the customers arc the real animals . . . They don’t have to be animals. It's the whole system that makes 'em animals".

The productive potential of modern industry is immense, and so is its potentiality for human liberation. In a rationally and humanly organised socialist world it could be used not only to meet basic and imaginative human needs but also to create more humane and satisfying conditions of work.

Capitalist employment offers much work that is at best useless and time-wasting and at worst harmful and destructive. The profit system treats the working abilities of men and women as commodities useful only to create marketable goods and services. It pays for workers’ skills, but everything also they are or have or want is subordinated to their "efficient” employment. It wastes them in unemployment—when no profit can be seen from employing them—and it wastes them in much of what they have to do only in the service of capital.

There is. however, an alternative. Today we have to be employed or unemployed, but tomorrow—or at least as soon as we can dissuade our fellow workers from continuing to support capitalism—we can have truly human work. As Ray Pahl put it in his book On Work: "the value system that encourages competition or greed at the expense of collaboration and altruism may not ultimately succeed”.
Stan Parker