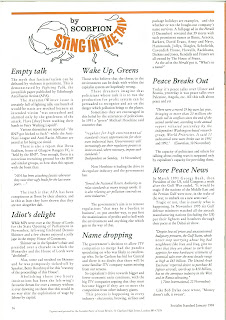 The myth that fascism/racism can be defeated by violence is persistent. This is demonstrated by Fighting Talk, the juvenilish paper published by Edinburgh Anti-Fascist Action (AFA).

The Autumn/Winter issue is certainly full of fighting talk: one bunch of would-be nazis are mocked because an intended victim "was unscathed and alarmed only by the gentleness of the attack. Have [they] been washing their hands in Fairy Washing Liquid?".

Various skirmishes are reported - "the BNP got kicked to fuck"- while the Anti- Nazi League and Anti-Racist Alliance are jeered at for being too timid.

There is also a report that Ibrox Stadium, home of Glasgow Rangers FC, is "held by the BNP". True enough, Ibrox is a notorious recruiting ground for the BNP and similar groups, so how does this square with the boast that:

"AFA has keen attacking fascists wherever they raise their ugly heads for the last seven years . . . "

The truth is that AFA has been conspicuous at Ibrox by their absence, and in this at least they have shown that they are not altogether daft.

While MPs were over at the House of Lords for the State Opening of Parliament in November, left-wing firebrand Dennis Skinner and a few chums enjoyed a jolly jape in the empty House of Commons.

Skinner sat in the Speaker’s chair and presided over a charade in which the Monarchy and the House of Lords were "abolished".

Alas, some cad sneaked on Skinner and he was pompously ticked-off by Speaker, Betty Boothroyd for this "travesty of the proceedings of this House".

Abolishing those two hoary institutions has been the left-wing’s favourite dream for over a century without it ever dawning on them that this would in no way alter the exploitation of wage by labour by capital.

Those who believe that the threat to the environment can be dealt with within the capitalist system are hopelessly wrong.

These dreamers imagine that politicians whose task it is to run the production for profit system can be persuaded to recognize and act on the danger which pollution brings to the planet.

Sometimes they are encouraged in this belief by the utterances of politicians. In 1991 a "green" Michael Heseltine said countries that:

"regulate for high environmental standards create opportunities for their own industrial base. Governments will increasingly use their regulatory powers to insist on and, where necessary, impose such standards."

Now Heseltine is leading the drive to de-regulate industry and the government has:

"forced the National Rivers Authority to relax standards at many sewage works. It is also relaxing air pollution controls on some industries."

The government’s aim is to remove regulations "that may be a burden to business", or, put another way, to put first the maximization of profits and to hell with the environment and anything else which gets in the way of that.

The government’s decision to allow ITV companies to merge had the pundits speculating on who was likely to swallow-up who. So far Carlton has bid for Central and there is no doubt that there will be some familiar ITV company names missing from our screens.

So capitalism’s drive towards bigger and fewer economic units continues, with the big ITV companies arguing that they must become bigger if they are to meet the competition from other industry giants.

This process is happening in every industry - electronics, brewing, airlines and package holidays are examples, and this whether or not the bought-out company’s name survives. A full-page ad in the Herald (1 December) revealed that 59 stores with such prominent names as Binns, Arnotts, Barkers, David Evans, Army and Navy, Hammonds, Jollys, Dingles, Schofields, Cavendish House, Howells, Rackhanis, Dickins and Jones, Kendalls and Frasers are all owned by The House of Fraser.

"There were a record 29 big wars last year, bringing to more than 23 million the death toll in conflicts since the end of the second world war, according to the annual report released yesterday by the independent Washington-based research group, World Priorities. It said 11 substantial new wars broke out in 1991 and 1992." (Guardian, 10 November)

The capacity of politicians and others for talking about ending wars is surpassed only by capitalism’s capacity for providing them.

In March 1991 George Bush, then President of the US, told Congress a week after the Gulf War ended, "It would be tragic if the nations of the Middle East and the Persian Gulf were now, in the wake of the war, to embark on a new arms race".

Tragic or not, that is exactly what is happening. In November 1993 six Gulf defence ministers watched all the aircraft manufacturing nations (including the US) put their fighters and bombers through their paces at the Dubai air show.

"Despite low oil prices and unaccustomed budgetary pressures, the Gulf States, which never stop worrying about big bad neighbours like Iran and Iraq, give no hint that they are about to curb their appetite for new hardware: estimates of potential sales over the next decade range as high as $65 billion. The United Arab Emirates' reported desire to purchase 80 fighter aircraft, worth up to $10 billion, has set the aerospace industry in the West and in Russia salivating. ’

Like Bob Dylan once wrote, "Money doesn’t talk, it swears".