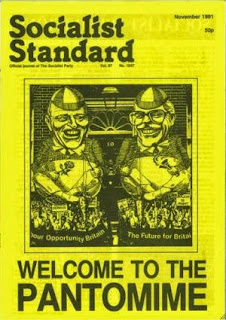 From the November 1991 issue of the Socialist Standard

The recent death of William Shockley, the American physicist and Nobel prize-winner, has removed from the scene a particularly unpleasant racist. Together with Arthur Jensen, Richard Hernstein, Hans Eysenck and others he argued that working class people and black people were innately intellectually inferior. At one time, and until fairly recently, this was the dominant view but is now largely discredited. But this has not prevented its protagonists from fighting a rearguard battle and denouncing their opponents as "dogmatic egalitarians” and even as "socialist utopians".

According to Jensen social scientists and educators have been indoctrinated to ignore genetics while Hernstein begins his argument for the biological basis of class society by a denunciation of Marxist theory and the socialist alternative. The theorists of the French and American Revolutions are not spared either, with Eysenck taking issue with the egalitarianism of Rousseau and Jefferson, and Hernstein attacking the American Declaration of Independence as well as the Communist Manifesto.

Trying to measure so-called innate intelligence goes back to Francis Galton, a cousin of Charles Darwin, who wrote a book in 1869 called Hereditary Genius. Galton misapplied Darwin's theory of biological evolution to the evolution of human society and its division into higher and lower classes (as well as to what he considered to be superior and inferior races) and went on record as stating that the eminent families of Great Britain had been selected in the struggle for the survival of the fittest in society because of their biologically superior traits.

Galton's intellectual descendants today have some equally bizarre views. Jensen concentrates on the differences between the average IQ Test scores for Blacks and Whites. Hernstein stresses the different scores obtained by upper and "middle class" children on the one hand and "working class” children on the other. Both attempt to explain these differences in IQ scores on biological, instead of sociological or environmental, grounds.

These theories of the innate inferiority of some group are all based on the view that "intelligence" is innate and fixed. Each of us is supposed to be born with a given amount of intelligence which stays the same throughout our lives; our minds can develop but only up to a certain point, and that point is fixed at birth, or rather at conception. Each person is seen as possessing a given level of intellectual ability and it is this that prevents some from going as far as others.

These theories had practical consequences since until comparatively recently they predominated. The selection of children at 11 under the 1944 Education Act in Britain for one of three kinds of education, for instance, was largely based on the faked IQ findings of Sir Cyril Burt. To this day Eysenck, Hernstein and the others argue that the level of intelligence that pupils will or will not reach has already been basically determined once and for all by their genes, and that schools should therefore be adjusted to sorting out and selecting the "bright" from the "dull" as determined by nature.

This totally ignores the fact that thinking can be taught. In the past thinking, in the sense of formal reasoning, was taught by a more or less spontaneously developed and unconscious method; which led to the belief that thinking either happened or it didn't. Today, however, it is clear that intellectual development is not a fatal process in which the basic learning faculties become more or less fixed by the age of six or seven. It is possible to facilitate the development of intellectual skills in everyone.

IQ Tests don't measure "innate intelligence"; they merely measure the ability of individuals to answer the questions and solve the problems set in IQ Tests. If individuals from some groups do better on average from those in other groups, this is merely a measure either of the different groups’ opportunity to learn to do the tests or of their different attitudes to the sort of things that are being tested.
Michael Ghebre
Posted by Imposs1904 at 3:15 PM