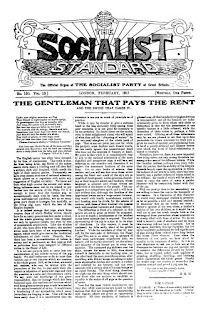 Editorial from the February 1917 issue of the Socialist Standard

A REPUDIATION OF THEIR CLAIM TO SPEAK FOR SOCIALISM.
There was a time when Mr. Will Thorne was spoken of as "honest, blundering Bill Thorne." It was not honesty blundering, however, that led him, after specifically declaring during his last election campaign that he was not standing as a Socialist, to bawl from the balcony of the West Ham Town Hall upon the night of the declaration of the poll which elected him, that he had won a great victory for Socialism and Labour.

Would the man who claimed a Socialist victory when he did not stand as a Socialist, say if he stood as a Socialist when he arose to move that amendment and make that remark? It is not at all difficult to supply an answer in the absence of one from the member for South West Ham.

Mr. Thorne does not speak as a Socialist because he is not a Socialist. His claim to be such is exactly on a par with his claim to have won a victory for Socialism when he admitted that he had not fought a battle for Socialism. Not understanding the class struggle, not realising the unity of interest of the working class the world over, he is a nationalist—an anti-Socialist. But just as he regards himself as a Socialist, so he regards other nationalists of other lands as Socialists also. And just as his ignorance of the fundamental facts of the class antagonism has permitted this sordid masters' quarrel to fill him with hatred of his fellow-workers of other climes, so he sees the Thornes and Clynes of other lands seething in a hatred of their own class of other nations such as utterly precludes a peaceful international conference when the present strife is over.

Undoubtedly Thorne is right within certain limits. The hatred with which he regards his fellow working men of Germany and Austria and Bulgaria is no doubt heartily reciprocated by his mental parallels in those countries. And doubtless also that attitude of mind is as fully appreciated by Kaiser, Hindenburg, Bhung, Schippeowner, Schweater and the rest as is Thorne’s similar mental attitude by a like circle at home, as an expression of loyal love and fidelity toward “the hand that feeds.” To argue that such men can sit in peaceable international conference were fatuous, and therefore Thorne, so far, is right.

We always have maintained that the late conglomeration called the International Socialist Bureau was not Socialist at all. Events have proved us correct. The first blast of war found the Thornes and Clynes and Hyndmans of the various countries at each other’s throats. The "Socialist International” collapsed. It was not founded on the international unity of working-class interests; it was not reared and tested and levelled and plumbed and kept true and sound by that grand instrument for working-class guidance, the principle of the class struggle. Had it been so based and built Thorne would have been pitched out neck and crop at least at no later date than the first opportunity after he fought an election but did “not stand as a Socialist.” Such evidence that he did not (or would not) understand that the line of cleavage is drawn between the classes, and that therefore the political struggle must follow the same line, and that again therefore the man who “did not stand as a Socialist" in that highest expression of the class struggle, the political struggle, necessarily stood in opposition to Socialism—such evidence, we say, of these things, would have sufficed to place him outside any Socialist International that was such in fact as well as in name.

And the same remark applies to all the members of the Labour Party, who each and every one ran upon the same constitution, and not as Socialists. It applies also to those “Labour representatives” of other countries who have followed the same line of action. These men, and the organisations whose mentality they reflected, who could not separate themselves from their masters in peace time, would not have been permitted to remain in a SOCIALIST international to wreck it because, perforce, they found themselves in hostile camps in war time.

The Socialist can never be a nationalist. His mind can conceive no division of interests between the working peoples of the world. To him capitalism is one the world over, an international torture-rack on which every working-class race of the present day is stretched in agony. To him this capitalist war, terrible as it is, is but one of the torture twists of that rack, wringing impartially the thews of all workers unfortunate enough to be caught in its toils. His bosom, therefore, harbours no hatred for the German or Austrian worker whom he finds in arms against his fellow of Britain or France. Whether the combatants are the willing or coerced tools of the master butchers, and whichever side they serve, they are alike the subjects of the Socialist's pity, regret, and fraternal concern. He knows that they are a part of his class, wherever they are to be found; he knows that their ignorance, so curiously alike in England and France and Germany and Russia, as the late International itself, in both its rise and its fall, amply proves, is part of the class ignorance it is his mission to combat and disperse; he knows that their weakness as well as their strength, their agony as well as their emancipation, their struggle as well as their foes, are international. The only thing he finds in his whole political outlook that is not international is the sectional interest of the master class—before which the International composed of the Thornes and Clynes and Hyndmans of all countries collapsed like a house of cards before a “Jack Johnson.”

This is the difference, then, between Mr. Thorne and hie like on the one hand and the Socialist on the other and it is the difference between an International composed of Labour adventurers and one consisting of Socialists and founded upon Socialist principles. For the former Mr. Thorne may be permitted to speak—for the latter he never shall. Any Congress which may be engineered and set up by men of the kidney of those is doomed to be rotten at the start, since it must start with the assumption that the workers must defend their masters' property. It must therefore crumble at the test, whether it is confined to the “Allies” and neutrals or not.
Posted by Imposs1904 at 8:47 AM