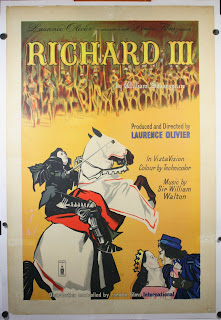 Film Review from the April 1956 issue of the Socialist Standard

An introduction to Shakespeare through the film is a direct contrast to the poverty-stricken method taught in the Secondary Modern Schools. There we were told to like him because his works are classics. Instead we learned to hate him because of the laborious memorising of long passages of meaningless verse. Consequently the majority of working-men and women are indifferent to him.

With the advent of the film, that mallet of knowledge smashes the inverted bowl of ignorance.

Richard III, showing at Leicester Square, breaks down the barrier of the artificiality of the stage where the actors shout at the top of their voices in a most unnatural manner. This technique makes it possible for Sir Laurence Olivier to discourse as if he stood at one’s side. Briefly, the plot deals with the diabolical schemes of the then Richard, Duke of Gloucester, to become king. He expounded his attitude in the opening verse:


" . . . I am determined to prove a villain
And hate the idle pleasures of these days.
Plots have I laid, inductions dangerous,
By drunken prophecies, libels and dreams,
To set my brother Clarence and the King
In deadly hate the one against the other. . . .”


“ ... We are determined to preserve the capitalist system,
And to hate the idle pleasures of the workers.
Plots have we laid, inductions dangerous,
By calculated religious, national and racial prejudice.
Brain-washing and vice anon,
In deadly hate set the workers physically and mentally
Within and without nations until the world itself;
At each others throats. . . .”

Or perhaps as Shakespeare himself would have applied his analysis to the self-preservation policies of Russian dictators and others.

That is the point about Shakespeare; he deals with human relationships within the private property system and clothes them with beautiful words and profound phrases. They are shrewd observations and will remain eternal. In a Socialist society they will prove a vivid insight into the minds of men and women governed by the private property complex.

The rest of the story deals with the carrying out of the power-seeking schemes, the killing of the king’s brother, the princes of the Tower and others. The planting of fifth columnists in the London crowd, hailing him king. A ruse not forgotten by the politicians of the present day nor by their verbal supporters, the journalists and the “camera-never-lies ” friends.

Eventually he meets his downfall at the battle of Bosworth, calling out with great effect, “My kingdom for a horse!"

The film is swift-moving and excellently coloured in conjunction with the wide screen process.

There are some exquisite scenes particularly the snow-covered landscape when the princes were being brought to London.

One cannot help mentioning Olivier because his fine acting dominates the film. The nearest to him, John Gielgud, was unfortunately given a minor role. The other actors, although good, still had that faint air of staginess, that is, a slight wooden demeanour whilst awaiting their cue.

Clare Bloom played wonderfully the difficult part of being consumed with grief as Lady Anne. The diction as a whole is clear. Later when one reads the play the hitherto dead words spring into life, voices of this actors within the mind speak their parts. Having reached that state one becomes an addict

This film is an exhilarating change from the usual trough of films dealing with blood and thunder and sordid glory.

Terrific stuff. I watched Richard II the other night on BBC4, "The Hollow Crown" with Ben Whishaw camping up Richard and Rory Kinnear (Roys wee boy madd good) as Bolingbroke.

Wasn't the reviewer of the film a member of Glasgow Branch? Any knowledge of him?