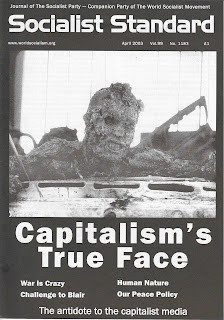 From the April 2003 issue of the Socialist Standard
Twentieth century American culture – the media context of my generation. Rock n' roll, jazz, blues, soul, hotrods, superheroes, fast food and, of course, Hollywood. Monsters, gangsters, westerns and science fiction; I have loved them all. That all of this was and is generated by the profit system which exploits us is only part of the story. To see our generation as purely the victims of a remorseless marketing campaign is to overlook the dialectical forces that lie beneath the empty glamour and desperate novelty of American culture. Human imagination itself is defined by its economic context and the capitalist context is rich in deep and unresolvable contradictions. Hollywood's fantasies are powerful examples of the need to both defend and celebrate its cultural values and also to escape from them.
To illustrate this let us consider the science fiction genre and its escapism which, in its better incarnations, is always combined with a political/cultural narrative. These themes are sometimes personified in the character of the 'alien'. Star Trek was a series that began as a TV drama in the sixties and subsequently spawned many movies and other TV spin-offs. Its menagerie of aliens can be seen as expressions of American characteristics; the naïve 'gung-ho' Klingon warriors, the inhuman logicians of Vulcan, the business greed of the Ferengi and, not least, the fascistic militarism of the Borg. Most intriguing of all is the alien 'Q' who is an omnipotent tragic fool (God in man's image). All of these aliens are contrasted with the crew of the 'Enterprise' (the future Americans) who, amazingly, have no money, no gods and no prejudices! It is as if this is one of the few arenas where Americans can truly see themselves, not as the human characters but as their alien incarnations. This perverse identification does not stop there; it has evolved into a full blown 'post-modern' cultural synthesis aided in no small part by the high priest of alien iconography – Steven Spielberg.
Close Encounters of the Third Kind was my first encounter with the subsequently ubiquitous 'grey' aliens. Whether or not it was Spielberg who actually invented them, his mystical insect-eyed, monochromatic, androgynous extra-terrestrials have come to dominate the science fiction of the past few decades. Countless books, movies and TV dramas have featured this species of alien all over the world – yet another example of US cultural imperialism. No longer confined to 'fiction' they now feature in the symbiotic cultural phenomena of alien abductions. One is reminded of the appearance of witches and demons to people immersed within the Christian cultures of the past. Surrounded as they were by paintings, sculptures and stained-glass representations of angels and devils we can see that such media inspired experiences are nothing new. Even the Christ himself seems to have been inspired by Old Testament prophecies of the coming of a Jewish 'messiah'. But, some might legitimately inquire, how do we know that at least some of these events are not 'real encounters' instigated by the activities of extra terrestrials? This is precisely the subject of Spielberg's latest TV series.


Taken is the story of alien abductees and their struggle to be taken seriously. These characters are continually thwarted in this by the conspiratorial activities of a US government agency. With references to previous media versions of this story within the narrative we have a series that feeds on both its own predecessors and the cultural experiences they helped to create. Just as religion was once 'the opiate of the people' now it is the media that provides the escapism from the day-to-day realities of the class struggle. It also provides that other ingredient so crucial for successful escapism – justice. No other culture has been so obsessive in its zeal for 'freedom and justice' and so fearful of its reality as America. In the character of the child-alien in the series we have yet another example of a messianic figure complete with miracles. Why does the land of technological miracles need the super-natural variety as well in its stories? Only because technology has failed to deliver the human necessity of social justice in its capitalist context. As with religion these stories are a projection into another realm of this basic human need. The greys and their 'hard-ware' represent both the fear and disappointment associated with technology and its still unfulfilled promise of a better world. It is hard not to conclude that the greys are the actual cultural incarnation of man's alienation from his own technical creations. Socialists are often told to just enjoy the story and stop analysing everything – but to us this is the story. Once you've seen the world through the lens of a new consciousness you cannot see the 'Emperor's new clothes' ever again. Although the owners of the media allow the telling of these stories, they do so because of their popularity and so profit potential. Quite possibly they are as unaware as their public as to the underlying political/dialectical reasons for its success. Where the politically naïve see evidence of aliens, socialists see evidence of alienation – I leave it to the reader to decide which is more plausible.
Andrew Westley
Posted by Imposs1904 at 5:25 PM