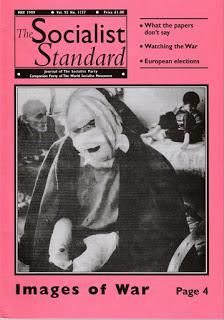 From the May 1999 issue of the Socialist Standard

These European elections will be the last major elections of the twentieth century, the last chance this millennium for us, the working class, to vote for ourselves for a change.

So what are the choices?

Firstly, you could vote for more of the same. The same old leaders, with the same old lies, promising everything, delivering nothing. You could vote for more unemployment and poverty, more stress and anxiety for yourself and in future for your children. For the continued threat to the environment and the planet we live on, for continued global warming, the destruction of the ozone layer, and pollution on an unprecedented scale.

You could vote for permanent global economic uncertainty and the threat of economic crises, which are part and parcel of the way society is organised today. A society organised on the basis of profit above all else, profit for a few while the majority have to take their chances on capitalism's roulette wheel. A society that says to us: "No profit, no production", "Can't pay, then can't have".

In Europe alone 20 million people are unemployed, simply because no profit can be made from their labour. Europe, alone, stockpiles millions of tons of food, destroys just as much and also, obscenely, pays farmers not to produce food. While at the same time pensioners in Britain and elsewhere must choose between keeping warm or eating. In the wider world hundreds of millions die of hunger or hunger-related diseases. The rich continue to get richer while the poor steadily get poorer.

But we do have a choice

We can say "enough is enough!"

The alternative is simple. A society in which the things we need to live are produced directly for human use. Where the means and instruments for producing things are owned in common by us all, not as now by no more than 5% of the population.

What this means specifically is that, quite simply, food will be produced to eat, clothes to wear, and houses to live in, to name but three examples, not as at present for the profit of a few. That production will be on the basis of voluntary co-operation, not the anarchy of competition we have today. As we co-operate to produce the things we need to live, by using the commonly-owned means of production and distribution, so we then take freely of the products of our labour.

No more leaders. The new society will of necessity be a truly democratic society, with decisions which affect us being taken by us. No more national boundaries, but a world-wide society, to replace the outdated system of global capitalism we have at present where production for profit is a hindrance to the fulfilment of human need.

No more classes. A society without employers or employees, haves and have-nots, simply people co-operating on a free and equal basis to produce the things we all need to live. A society where human beings will be able to live in harmony with nature, not like present society where pollution carries on unabated because to deal with it eats into the profits of the few.

These then are the choices:


If you agree with us, you can show this by voting for the list presented in these elections by THE SOCIALIST PARTY.
Posted by Imposs1904 at 7:26 AM