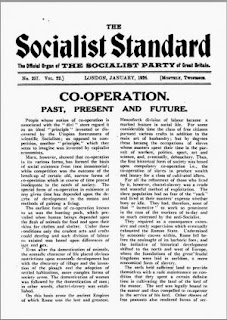 From the January 1926 issue of the Socialist Standard

In a series of articles contributed to the Socialist Standard in 1911 on anarchism, we referred to the “falsified” Pages of Socialist History by W. Tcherkesoff. This brochure contained an attempt by this anarchist writer to show that the Marx and Engels Communist Manifesto of 1847 was a plagiarism of Victor Considerant’s “ Manifesto of Democracy to the 19th Century.”

The accusation against Marx of stealing other people’s ideas and writings was so often made and the charges regularly exploded that it was not surprising to find that Tcherkesoff’s allegations were groundless. Recently Tcherkesoff died and his anarchist friend Nettlau (the biographer of Bakunin) in an article in “Freedom” (December, 1925) warns the anarchists of the baselessness of Tcherkesoff’s charges against Marx.

We quote the following extract from “ Freedom’s” article by Nettlau :—

Tcherkesoff had the misfortune to make people doubt the seriousness of his other researches when he jumped to the conclusion that the "Communist Manifesto" of 1847-48 was sheer plagiarism on a “Manifesto” by Victor Considerant, published by the Paris Fourierists in 1841 and 1847. I remember the morning when Tcherkesoff, happy as a lark, just returned from Amsterdam, placed before me copies of the “Communist Manifesto’’ and of Considerant’s “Principles of Socialism: the Manifesto of Democracy to the Nineteenth Century” (Paris, Libr. Phalanstérienne, 1847, 157 pp.) He had discovered the latter among Domela Nieuwenhuis’ store of old pamphlets, and recognised it as a little book which he had read in Russia over thirty years ago, which the “Communist Manifesto” always recalled to his mind, though he had not been able to trace it during all those years. He placed before me many parallels in the descriptive and critical parts referring to capitalist society, and as Considerant’s text, the revised edition of his “Bases of Positive Politics: Manifesto of the Societarian School founded by Fourier” (Paris, La Phalange, 1841, 119 pp.), was the earlier work, Tcherkesoff concluded that Marx and Engels were guilty of outrageous plagiarism, stealing ideas and even the words from Considerant.
I was not struck by this discovery: on the contrary, I felt that Tcherkesoff made a great mistake, and I told him so from the first moment; but all was in vain. With one single exception I never met a person who believed that Tcherkesoff was right in this supposition, hut it was felt to be painful not to let him enjoy his discovery which made him so happy. So he published what he considered the proofs of this plagiarism, and later on hunted down Engels for a similar matter (Buret), overdoing this case considerably, and in general he was convinced that he had made out Marx and Engels to be literary rogues and scamps—in one word, thieves.
He had not made out this case; he had only diminished the value put on his other criticism of Marxism which touched very weak spots of that system, but which his Marxist opponents discredited by pointing to the lack of critical judgment shown by the unproven charge of plagiarism.
Those who had the leisure to examine the original publications of the early French, English and German Socialists need not be told that Victor Considerant was an infinitely able social critic of the 30’s and 40’s, wonderfully apt in describing the effects of capitalism after seeing it at work in that eminently capitalist period, in France and England of that Louis Philippe and early Victorian age. They also know—and can still add to their knowledge by manuscripts of Marx and early writings of Engels which have only quite recently come to light—that these two German Socialists, a decade younger than Considerant, had also since the beginning of the 40’s worked harder than most others at philosophical, political, and economic studies, leading them to the outspoken Socialist conclusions which we know. Both they and Considerant were at their best in 1847, and as thoroughly competent Socialist thinkers both parties necessarily described and criticised capitalist society in similar appropriate terms, in the standard technical language of well-informed Socialist writers of that period. What else were they to do? If to-day two Anarchist authors were to write manifestos summing up Anarchist criticism of the State, their texts would necessarily more or less agree, provided each of them refrained from indulging in too personal a style —and from this personal style both Considerant and Marx and Engels refrained in 1847, the latter writing moreover on the basis of previous material, questions, etc., which are known at present in derail, but were not yet unearthed in Tcherkesoff’s time. So our comrade’s splendid fight against Marxism was somewhat marred by the idiosyncrasy here discussed.

Thus the Anarchists themselves throw overboard one of the most stupid charges ever made against Marx. Those who care to read the pages of George Julian Harney’s “Democratic Review” of 1849 can study the articles written by Considerant for that journal and the Utopian, idealist and unscientific language will easily show the difference between Marx the materialist and Considerant the Utopian idealist.

After Engels death there was discovered the original manuscript of his independent draft of the Communist Manifesto. This was published in Germany under the title of “The Principles of Communism." It has now been translated into English and published in Chicago.

This draft was made by Engels originally for a programme read to the Paris section of the League of Communists in 1847, and was used later as Engels' individual draft submitted to the London meeting in 1847.

One is struck when reading it with the remarkable agreement in the statement of their ideas by Marx and Engels. A study of Engels' pamphlet shows how ridiculous Tcherkesoff’s allegations were.

Apart from Engels’ draft, the magazine and polemical writings of both Marx and Engels prior to 1847 shows every student that the later writings were an application of ideas, outlined and suggested in their earlier work.
Adolph Kohn
Posted by Imposs1904 at 12:43 PM