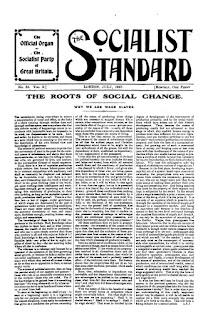 Editorial from the July 1907 issue of the Socialist Standard

The Labour Party will soon need to cry “Save us from our friends”! The other “Leaders” who failed to secure election are turning upon them.

Mr. Russell Smart, in the columns of the Labour Leader, asserts that, since the General Election, they have lost ground because of the “tame and unheroic policy the Labour Party has followed in the House of Commons; in the eyes of the electorate it has scarcely justified its existence.”

But what does Mr. Smart expect? The Labour members cannot go beyond the people who elected them. As these people were not Socialists, in some cases as at Leicester, Halifax, etc., avowedly Liberals, the Labour members can do no more than ordinary Liberals would do. Surely Mr. Smart does not expect them to sacrifice any of their respectability by making themselves unpleasant in the House of Commons. It’s much more to their liking to stump the country telling the people how they “love” the Liberal Leader and how "gratified" they are at the measures which the Government introduce.


And does Mr. Russell Smart know where he is? It would appear not. He rightly asserts that to get public support and enthusiasm the Party must have something worth fighting for (assuming they desire to fight, which we doubt). As he says “the people will rally to a ‘Cause’; they will remain cold to a policy.” What is the “Cause” that is to rally them? The Social Revolution? Oh, no! All that is suggested is that the Party could rally to its support the whole Labour world, organised and unorganised alike, by putting into concrete form the “great and inspiring idea" — the Right to Work !

The God-given Curse.
The Right to Work ! In the sweat of thy face shall thou eat bread. So runs the “ God-given curse.” And in the twentieth century, “when Labour is awakening to a sense of its power and responsibility," its attention and efforts are to be concentrated on the Right to Work!

In the dining room of the House of Commons, in the luxurious saloons of the Carlton Restaurant, the Pavilion, the Popular, the Trocadero, and the Mansions of the West End, word is to be conveyed to those who “ toil not, neither do they spin,” that the Labour Party is anxious that the “right” of the wealth-producers to work shall be conceded by Act of Parliament; that the separation of the master class from the working class shall be even more legally recognised; that it shall be by law enacted that the working class have the "right" to work, as distinguished from the master class, which has the “right” to enjoy the good things of life without toil, and over the “apples and nuts,” over the wine and cigars, the master class and its parasites will smile the smile of smug satisfaction, and drink the health of that, from their point of view, beneficent institution, the Labour Party.

Many years ago when, at the behest of the “leaders” the unemployed were—as they are doing now— praying to spooks, following priests, petitioning kings, appealing to politicians, looking to leaders,—anything but relying upon themselves, a demonstration was held in Trafalgar Square. On the plinth was Mr. Ben Tillett, amongst others. With broad-brimmed hat covering the top of his face, with coat collar (it was winter) turned up and covering the bottom part of his face, he bellowed: “To day we demand the right to work, next year we will demand the right to live.” Why wait until next year, he was asked, but did not reply. And to-day, ten years after, the same old fraud is being put forward as a “Cause,”—the Right to Work.

The Evil of Compromise.
Could we have a better illustration of the evil of compromise? If the people have any right to live, they have it now, not next year or at any future time.

And what does the “Right to Work” mean, under Capitalism? The unemployed are to be put to work, in accordance with an Act of Parliament which the Labour Party is to get passed. Is there not already sufficient wealth produced to satisfy the needs of every member of the community? There is enough wasted every night to feed all who lack food. It is therefore evident that what is required is not more work, but a sensible distribution of present work and the wealth already produced. This fact, however, seems to be ignored by our “Right to Work’’"friends.”

If the “Right” of the working class to work is conceded by Act of Parliament, to what work are the unemployed to be put? Already there is produced not only as much as there is an effective demand for but in many cases more. If, therefore, those not required by the capitalist "organisers”of industry are put to work under the usual conditions as to hours, etc., their product must tend to glut the market and, competing with the product of other factories, involve some capitalists in loss and throw other men out of employment. Does Mr. Smart expect the capitalists to pass a measure providing for this?

If, on the other hand, they are to be put to work producing only those things which they require for their own use, the necessary hours of labour would be so very few that the working class would recognise the extent to which they are robbed by the master class and—the capitalists’ game would be up. The master class are quite aware of this, and are not to be caught in this direction.

Useless Work.
Work will only be provided by a capitalist government for those of the unemployed who make themselves objectionable, and menace capitalist property. When it is found, it will consist mainly of the useless kind digging holes and filling them up again.*

What the unemployed and all other folks want is food, and also clothing and shelter. That these can be obtained by some individuals without working for them no one can dispute. We object to any able-bodied person obtaining them without doing his share of the necessary labour, but seeing that they can be so obtained, the unemployed have as great a right to obtain them in that way as the members and parasites of the master class. Let the unemployed throw over the misleaders who urge them to appeal to their masters to find them work. Let them recognise that only the common ownership of the means of life will solve their problem and proceed to convert their fellows. Pending the conscious effort of the working class that shall establish the Socialist Commonwealth, let the unemployed determine that they will not starve.

* In his pamphlet, “The Right to Work,” Mr. Russell Smart urges that the unemployed should be set to stone-breaking as a labour test.

Email ThisBlogThis!Share to TwitterShare to FacebookShare to Pinterest
Labels: Editorial, July 1907, Labour Party, Left-Wing Reformism, R1907, The Right To Be Lazy, The Right To Work