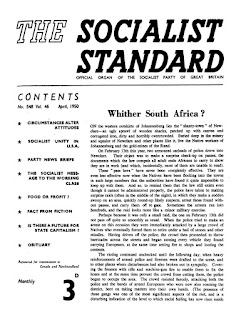 From the April 1950 issue of the Socialist Standard

Contrary to popular belief, the Labour Party has never been a Socialist Party.” So says Lester Hutchinson, M.P., in the Daily Worker (3.2.50). We cannot do otherwise than agree with him, but his reasons for disputing their claim to be Socialist are not the same as ours. We dispute their claim because we know what Socialism is, how it is to be achieved, and by whom. The means of production and distribution must be taken over by the people as a whole, controlled by them democratically for the benefit of all. The Labour Party’s objective is the opposite of this; to make capitalism work; to get the capitalists of this country out of the mess in which they have landed themselves with their capitalist competitors abroad. To the extent to which they succeed they strengthen capitalism and render it more difficult for the workers of this country to see the necessity for the establishment of Socialism.

“The word 'Socialist’ was thrown at the Labour Party by its Tory opponents as a term of abuse; and it stuck,” says Lester Hutchinson. But it soon became, apparent to the politically ambitious, would-be labour leaders that such abuse was no handicap. On the contrary, it conjured up ideas of social reform in people's minds, it made the Labour Party appear as a workers’ party pledged to improve conditions for the under dog. Few workers knew what was meant by Socialism, but most could be induced to put their trust in leaders who plausibly advocated reforms, even when such reforms stood not a ghost of a chance of becoming law. The Labour Party thus became a free for all in the political scramble. And those who succeeded did so because they saw the pitfalls and avoided them. Those pitfalls were the basic principles of scientific Socialism: the conflict of interests between the workers, who produce all wealth, and the capitalists, who enforce its production by their ownership of the means of production and their wages system.

Throughout its history the Labour Party has steadily discredited any idea of a class struggle, not because the workers are not yet class-conscious in sufficient numbers to warrant it, but because it will bring the end of their leadership nearer as increasing numbers of workers realise that the opposing interests of the two classes cannot be reconciled.

The obvious way to show that the Labour Party was not Socialist would have been to define Socialism and then compare it with their policy and objectives. This is the only sound method, and applies, not only to the Labour Party, but to the Communist Party as well. Both parties would continue the commodity character of human labour-power. The wages system would remain and the surplus value created by the workers would go, under the rule of the Labour Party, to the previous owners as bond-interest. When the Communists deign to state their intentions they seldom go much further than their rivals. They will not pay “extravagant” compensation. Moreover, there is no mention of any change in the workers' status. In short, neither the Labour Party nor the Communist Party are Socialist, though both lay claim to that title.

As Lester Hutchinson says; “This misuse of political terminology has caused and is causing the utmost confusion, and it enables leaders to put across essentially anti-Socialist policies in the name of Socialism.” Both the above-named parties and all their leaders come under this sweeping generalisation. But it is only those who do not understand what Socialism is that are confused. The worker who understands Socialism needs no leading and cannot be misled. It is therefore incumbent on the workers everywhere that they understand individually for themselves what is meant by Socialism, and the part each must play in its propaganda and establishment. That is the only sure way to avoid the confusion and misrepresentation spread not only by the Labour Party and the Communist Party, but by the orthodox capitalist parties as well.

When Marx and Engels placed Socialism on a scientific basis, the choice for the worker lay between Tory and Liberal, but both were capitalist, and the Socialist of those days, knowing what that meant for the workers, said “a plague on both your houses.” To-day the situation has not changed. Only the names are different. Four main parties now come before the workers and ask them to support policies based on capitalism in one form or another. Capitalism with its drudgery and poverty for the mass of the workers, and the ugly threat of atomic warfare taking definite shape.

The greatest obstacle to a clear understanding of Socialism that faces the worker is the confusion spread by the so-called parties of the workers, the Labour and Communist Parties. And the worst and most insidious form of their confusion is that in which they pose as leaders, promising reforms in working-class conditions in return for their support.

This is contrary to the very essence of Socialism, which, being easy to understand and intimately concerned with the worker’s conditions everywhere, proclaims to the individual his personal responsibility in the historical movement of the working class towards the establishment of a sane and rational system of society.

For Socialism can only be brought about by the efforts of the working class. By their understanding, their organisation as a class party, opposed to all the other political parties, whether openly capitalist or alleged labour.

The working class, the class that suffers poverty that is threatened with atomic warfare, with more austerity unless they work harder, must freely organise themselves as a political party that will leave the leaders of other parties cold. Immune to every kind of confusion, and organised for a single objective, they will steadily gain power until they control all political and administrative machinery. They will then proceed to eliminate the machinery of profits and wages, leaving themselves free to organise production and distribution on a democratic basis for the satisfaction of all mankind.
F. Foan
Posted by Imposs1904 at 11:22 AM