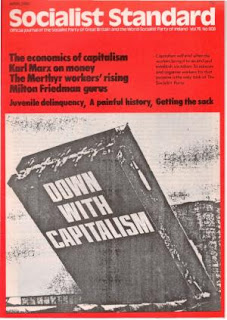 From the April 1980 issue of the Socialist Standard

As the capitalist system developed, causing the steady decline of the independent handworker and the replacement of manual labour by machinery, the effects on those who worked for a living were so severe that their struggles inevitably centred around wages and conditions. Battles with the employers resulted in the formation of trade unions, while struggles for political elbow-room culminated in political reform movements such as Chartism. The working class were joined by disaffected groups such as small traders and producers, who were sinking to ruin. Some workers may have hankered for a return to the handicraft production of the past, others harboured vague co-operative “socialist" notions, but there was little conscious recognition of the need to bring the powerful new forces of production into the common 'ownership of all society. Workers’ fierce struggles were rooted in the antagonism of interest between capital and labour.

In the mid-19th Century, Marx had unravelled the role of class struggles in the development of society, discovering the nature of exploitation in capitalist production and showing how social production conflicted with the private ownership of the means of production and distribution, resulting in economic anarchy, trade cycles of boom and slump, and capitalist rivalry which could lead to war. However, even those in the working class movement who understood and accepted Marx's analysis, saw the solution as so far off that they looked to reform as a means of ameliorating the suffering and wretched conditions of the working class until the time was ripe for socialism.

The impetus towards social reform was not provided by the working class alone. There were always some members of the capitalist class who recognised the need to improve the conditions of the workers. This was particularly the case when the proposed legislation affected pockets other than their own. Most of the Factory Acts of the 19th Century were brought in by the Tory Party who represented the interests of the landowners. The National Reform Union was set up by Liberal manufacturers with the object of winning support for the Liberal Party by campaigning for workers to have the vote.

The gaining of the vote by the working class signalled a new way to political power-dangling reform measures in front of the electorate. These have been the opportunist tactics used ever since by avowedly capitalist or allegedly labour parties. Whether the proposed measures actually get implemented or make much difference in the long run is another matter, which perhaps accounts for the 30 per cent of the electorate who do not bother to use their votes.

Some of the most successful capitalist enterprises paid wages above the accepted union rate and had due regard for the welfare of their workers. Individual capitalists such as the Cadbury brothers built model housing estates, offered improved working conditions, education, and showed a generally paternalistic concern not only for the bodies of their employees and families, but also for their “souls". Reforms have cost the capitalist class very little for they have received ample recompense in terms of increased production and the stability of their system.

The working class movement has produced factions that claimed it was possible to get socialism without first making socialists. The syndicalist plan was to seize the means of production and distribution by industrial action, by-passing Parliament or its equivalent. Although the movement in its early days had some support, bitter reality has shown the fallacy of their views. Whoever controls Parliament controls the armed forces and police, and in prolonged strikes the suffering of the workers far outweighs any discomfort to the capitalists. But syndicalist ideas still linger on among some left wing groups.

The Bolshevik seizure of power in 1917 saw the birth of the Leninist theory of revolution. In a predominantly capitalist world and lacking both productive capacity and the acceptance of socialist ideas by the population, the only way Russia could develop was along capitalist lines. A repressive state capitalist regime masquerading as socialism has since developed, adding to the confusion and misunderstanding of workers and thus making the spread of socialist ideas that much harder. There has been similar confusion in East Europe, Cuba, China and so on. These have emphasised the fact that not only must socialism be a world-wide system, but also that the forces of production—the most important part of those forces being the working class—must first be ready.

In the last quarter of the 19th Century the working class movement threw up Social Democratic parties claiming adherence to the theoretical basis of Marxism and the need for revolutionary political action, but which all had reformist programmes with a bewildering variety of immediate demands. The “Gradualist” school of thought, typified by the Fabian Society, claimed that a succession of reforms could gradually change society, that there could be a growth of socialism alongside capitalism until society was transformed. From these ideas grew the ILP and the Labour Party, with programmes of nationalisation and other anti-working class measures.

In 1904 a group of working men and women were convinced that only by dispossessing the capitalist class of the means of production and distribution and bringing them into the democratic control and common ownership of the whole community could a fundamental change in society be made. Rejecting any concept of leadership they saw that it required working class majority understanding and democratic decision before socialism could be achieved. They formed the Socialist Party of Great Britain.

From the beginning the SPGB repudiated any programme of immediate demands, on the grounds that such programmes do not serve as a means of organising for socialism but thrust the socialist objective into the background, and attract non-socialist elements. While it is true that workers have to struggle over wages and conditions this must be confined to the industrial, trade union field, separate from the political. Some reforms may be of sectional or temporary benefit but this in no way equals the effort required to achieve them. The capitalist class often offer concessions both to improve the productive capacity of workers and to quiet social unrest. But a growing socialist movement will bring more concessions to the working class than any amount of pleading or agitation for reform.

What can we learn from the long painful history of the working class? We have seen the alleged labour parties gain mass support and political power. Once in government they have found that capitalism cannot be run in the interest of the working class and their actions in office—such as demands for harder work and wage restraint—would not disgrace the most reactionary Tory. Capitalism has expanded to cover the greater part of the globe, has lurched from crisis to crisis, from war to war, and even now production is again being cut back in the midst of widespread poverty and shortage; there is a confrontation between rival capitalist powers that could plunge the world into nuclear war. Unemployment is growing, cuts are being made in education, housing, health and welfare services. Perhaps that is the ultimate futility of reformism. If reforms can be won they can also be withdrawn or reduced.

Workers who are concerned about capitalism’s problems should not waste their time and energy demonstrating against cuts and working for reforms, but instead organise consciously and politically for the overthrow of capitalism and the establishment of socialism. That is our only objective—short-term, long-term—and it is as close as the working class of the world choose to make it.
Alice Kerr
Posted by Imposs1904 at 9:37 PM