James Connolly and the Easter Rising (2016) 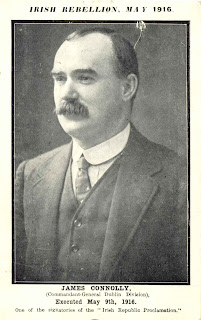 From the Socialism Or Your Money Back Blog

This is the text of a talk given by Adam Buick, one of the speakers at the Wakefield Socialist History Society forum on James Connolly and the Easter Rising
I want to develop the case put by Sean O’Casey in 1919 in his The Story of the Irish Citizen Army that, in participating in the 1916 insurrection, Connolly was not acting as a socialist.
O’Casey wrote that “Connolly had stepped from the narrow by-way of Irish Socialism on to the crowded highway of Irish Nationalism”. He gave “fixing on the frontage of Liberty Hall a scroll on which was written ‘We serve neither King nor Kaiser, but Ireland’” as an example of Connolly’s “determined attachment to the principles enunciated by Sinn Fein and the Irish Volunteers, which were. in many instances, directly contrary to his life-long teaching of Socialism”. As a result, O’Casey went on, “Liberty Hall was no longer the Headquarters of Irish Labour, but the centre of Irish disaffection”.

The Easter Rising, so-called, was an insurrection planned and led by the Irish Republican Brotherhood whose aim was to establish a Republic in Ireland along the lines of those in France and the United States. In other words, an independent Irish capitalist state.

Connolly had always stood for Ireland becoming a separate country. But in this, he was only adhering to the general viewpoint of the Second International that workers had a country and should strive to establish socialism  in it. In so far as they didn't think “socialism in one country” to be possible they envisaged a federation of independent socialist countries. Connolly was insisting that Ireland should be one of these countries. This view led to their downfall in 1914 when most of them rallied to the defence of their “country” in the First World War. It could also be said to have been Connolly’s too as it led to him also rallying to a capitalist state, albeit a would-be one.

Connolly had been a part of the revolutionary socialist scene for a period. In Scotland, where he was born, he had been a member of the Social Democratic Federation, the organisation that first introduced Marxist ideas into Britain, and then of its equivalent in Ireland, the Irish Socialist Republican Party. He participated in the “impossiblist revolt” in the SDF against the authoritarianism and opportunism of its founder Hyndman, which led to the formation of the Socialist Labour Party of Great Britain in 1903 and of the Socialist Party of Great Britain in 1904. Connolly was, in fact, the first chairman of the SLP, but soon afterwards left for America where he joined the Socialist Labor Party of America. Other members of the ISRP who left Ireland joined the SPGB.

The SLP of America was a party which, under Daniel De Leon, combined Second International Marxism and Syndicalism. Syndicalism is the doctrine that the best way, both to get improvements under capitalism and to overthrow the whole system, is through industrial action, culminating in the working class seizing control of the means of production. “Taking and holding” them was the phrase used. Unlike the French revolutionary syndicalists who rejected electoral action, De Leon and the SLP held that the “taking and holding” of the means of production would have to be backed by political action to win control of the state via the ballot box. The SLP called its view “socialist industrial unionism”.

The SLP participated in the formation of the IWW in 1905 but in 1908 the IWW adopted an anti-political stance, i.e. a pure syndicalist position, and De Leon and the SLP were expelled. Connolly, who by this time had fallen out with De Leon, remained and left the SLP.  In 1909 he published a pamphlet Socialism Made Easy setting out his views. The first part was made up of short “workshop talks” he had written some years previously; the second of longer articles explaining his “industrial unionism” which showed that, despite what the IWW had decided in 1908, he still adhered to the same basic position as De Leon: industrial action to overthrow capitalism backed up by political action at the ballot box. Writing in capitals he emphasised:

“IT IS, THEREFORE, ABSOLUTELY INDISPENSABLE FOR THE EFFICIENT TRAINING OF THE WORKING CLASS ALONG CORRECT LINES THAT ACTION AT THE BALLOT BOX SHOULD ACCOMPANY ACTION IN THE WORKSHOP.”

“The workers will be industrially organised on the economic field, and until that organisation is perfected, whilst the resultant feeling of class consciousness is permeating the minds of the workers, the Socialist Political Party will carry on an independent campaign of education and attack upon the political field, and as a consequence will remain the sole representative of the Socialist idea in politics.”

Although I think he got it the wrong way round – I think that, while both are necessary, political action is more important than industrial action and he was clearly wrong in assuming that “industrial union consciousness” would automatically reflect itself on the political field as socialist consciousness – this pamphlet shows that Connolly had once been part of the revolutionary socialist scene.

After his return to Ireland in 1910, Connolly came to abandon this position about the need for a socialist party to carry on a campaign of education and attack on the political field and to be “the sole representative of the Socialist idea in politics”. In 1912 he supported the setting up of the Irish Labour Party, a non-socialist party modelled on the Labour Party in Britain, to be the political arm of the trade union movement in Ireland. His 1915 pamphlet The Re-conquest of Ireland envisages this happening through the spread of co-operatives and the gradual nationalisation of more and more industries. It also lists a number of social reforms which “Labour”, i.e the Labour Party, should campaign for. He still believed in “One Big Union” but more to defend workers within capitalism than to take and hold the means of production.

It is not his drift towards Labour reformism that’s the issue here. The mystery is how he came to play a leading role in a pure and simple Irish Republican uprising. He had of course always been a republican in a sense. After all, he was a founding member of the Irish Socialist Republican Party with its paper The Workers Republic (although the terms “Socialist Republic” and “Workers Republic” were also in use outside Ireland as an alternative name for socialism as a system of society). But, precisely, a “socialist” or “workers” republic, not a capitalist republic as in France or the United States.

One of the articles included in Socialism Made Easy was a reprint of an article from The Workers Republic of 1899 entitled “Let Us Free Ireland !” Here’s an extract:

“After Ireland is free, says the patriot who won’t touch socialism, we will protect all classes, and if you won’t pay your rent you will be evicted same as now. But the evicting party, under command of the sheriff, will wear green uniforms and the Harp without the Crown, and the warrant turning you out on the roadside will be stamped with the arms of the Irish Republic. Now, isn’t that worth fighting for?And when you cannot find employment, and, giving up the struggle of life in despair, enter the poorhouse, the band of the nearest regiment of the Irish army will escort you to the poorhouse door to the tune of St. Patrick's Day. Oh! It will be nice to live in those days!“With the Green Flag floating o’er us” and an ever-increasing army of unemployed workers walking about under the Green Flag, wishing they had something to eat. Same as now! Whoop it up for liberty!”

This is prophetic of what did happen after an Irish State was established in 1922. The only thing he didn’t get right was that the flag that floated over the unemployed was a tricolour and not a green one with a harp.
This was not aimed at the Irish Parliamentary Party at Westminster as they supported only Home Rule. It was, and can only be, a criticism of pure and simple Republicanism, of “patriots who won’t touch socialism” as Connolly called them. So why then did he later join them in a vain attempt to set up an Irish capitalist Republic?

People have speculated as to why Connolly departed even from his later commitment to Labourism to support a typical Fenian stunt. Psychological explanations have been offered such as disillusion with workers for supporting the war or with Irish workers joining the British Army. It’s even been suggested that he had come to share Patrick Pearse’s view that a blood sacrifice was needed to revive Irish Nationalism.

Certainly, the insurrection was suicidal. Its leaders must have known that it had no chance of success, not even with German aid. It had very little popular support and was challenging the might of the world’s most powerful capitalist states which, being at war, was going to be at its most ruthless. And it was.
I want to finish by quoting what the Socialist Standard, the SPGB’s paper, said at the time:
From the May 1916 issue:
“A grave armed revolt in Dublin against English rule is raging at the time of writing. It is a revolt doomed from the outset, both because of the futility of its narrow nationalist aims, and the utter hopelessness of such a revolt against the mighty organised force of the political State.”

From July 1916:
It is true that the Irish workers have a fearful struggle to live, like the rest of their class the world over. But an anti-social movement like theirs, with "Ireland for Irishmen" for its slogan, was doomed to failure from the start. We, the working men and women who form the Socialist Party of Great Britain, sympathise with our fellow workers in Ireland in their struggle against the hideously squalid conditions that prevail among them, but must record our hostility to any movement that is not based upon the class struggle.h

And, finally, from August 1916:
It is a false notion of the Sinn Feiners and Nationalists that the Irish workers must struggle for national independence before they can tackle the problem of poverty. But the working class everywhere is under one capitalist government or another. To split territories, set up new governments, or to re-establish old ones will not help them nor even simplify the problem. Their only hope lies in the speedy establishment of Socialism. They must join hands with the workers of the world, and make common cause against the ruling class. They must make ready use of the last war – the war of the classes, in which classes will be abolished and a real equality established on the basis of ‘common ownership and democratic control of all the means of life.’”