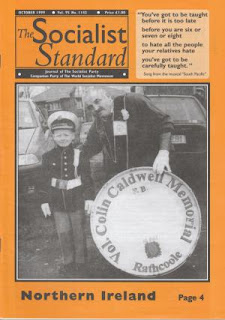 Editorial from the October 1999 issue of the Socialist Standard
The cult of leadership
In 1997 Britain emerged from the dark days of Tory rule, liberated by the Labour Party—their path to victory illuminated by the dazzling smile and radiant glow of sincerity from Tony Blair, who promised "Things Can Only Get Better!" If only the People would trust him to lead them. It was He, and He alone, with his charm and iron-willed leadership, that brought victory to the Labour Party. It was He, and He alone, who could save Britain. It was He, and He alone, who was fit to give us leadership.
The Cult of Tony was born!
And the members of the Labour Party, from the knockers-on-doors to the MPs in Westminster, to the people who owed their very jobs to Tony, saw how He and He alone brought them victory. And they believed. They believed it was Tony what won it, they believed that Tony could do it, they believed they owed it all to Leadership. And they looked out into the darkness in the world, the places where Tony's light—alas!—did not and could not shine, and they knew what was the one thing needful.


The Cult of Leadership was born!
MORE LEADERS! More leaders was the answer. Wherever the darkness of poverty, inefficiency, despair and degradation existed in the Land, leaders were the solution. Things can get better, things must get better, but only if the resolute will of a Leader can be brought to them. But, how to find these great leaders? How to bring the resolute will to bear? Then, the London Bells spoke, and all became clear: new elections were needed.


The Cult of Elected Mayors was born!
Don't quite buy it? Well, neither do we. It seems a nice idea—everything running smoothly, no hassles, no delays, no backroom haggling or party politicking, simply One Man charging through the wilderness solving problems at a stroke. It is, though, just a fantasy. Leaders spend a lot of time, money and effort, trying to persuade us that someone, someone at least, is in control, and that we have some real control in our own lives, through (of course) them.


The truth is that no elected politician can control the market—which operates for the private gain of a tiny number of owners. As long as the market exists we cannot have control of our own lives, run things in our own, and our own communities' interests, because that would threaten the profits of the tiny few. Leaders can't change that. Only we can, by acting together, without leaders, to end the whole profit-driven, market system.
Posted by Imposs1904 at 1:30 AM