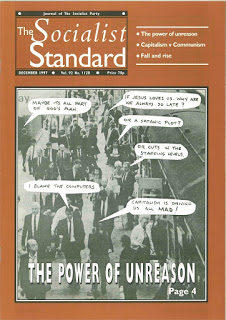 Capitalism divides
Social differences have grown in Israel over the last 20 years, but in few places are they as visible as at Mevasseret Zion. There are in fact two communities living on top of each other. One is the old village with attractive single-storey houses where the original Jewish immigrants live.The other is a new township of luxury red- roofed villas in which live some of the richest members of Israel’s political and business elite . . . Israel vies with Ireland as one of the most inegalitarian of developed countries. The boom of the 1990s largely benefited the richest 20 percent. In last year’s general election this badly damaged the Israeli Labour party in the poorer towns and cities and helped Benjamin Netanyahu become Prime Minister. (Independent on Sunday, 20 July.)


That’s all right, then
[Gordon] Roddick asked [John Bird] to start the Big Issue, providing the initial funding of half a million, despite a feasibility study predicting that the magazine wouldn’t work. The circulation has grown from 30,000 to more than a million readers. There is now a separate Scottish edition and 10,000 authorised vendors across the country . . .  John Bird has been awarded an MBE for his efforts and also been criticised for making a profit out of homelessness. The Big Issue, the argument goes, is a business. If the massive problem of the homeless was ever solved, there would be no need for the magazine. “Of course I make money from homelessness,’’ he admits. “I believe in enlightened self-interest. I have been good for the Big Issue and homeless people because I’m part of the crisis” (The Herald, 26 July.)


Neat!
Priests have no rights under employment law because they serve God and have no employer on earth, three Court of Appeal judges ruled yesterday.They dismissed an appeal by an Anglican curate, the Rev Dr Alex Coker, against an Employment Appeal Tribunal ruling barring him from taking his case of unfair dismissal before an industrial tribunal . . . The Bishop of Southwark, the Right Rev Roy Williamson, said: “I am delighted but not surprised at the judgement, confirming what we had always understood the law to state—that a curate is not an employee.” (Guardian, 12 July.)


It’s not over
The story of the last 200 years has been one of a struggle between capital and labour. Capital won. It is gradually becoming the most powerful influence on our lives, above that of governments . . . Mr Blair is jogging steadily, another few miles each morning, towards a new political settlement in Britain. This will entrench capitalism, reduce welfare, balance the budget. (Financial Times, 26 July.)


He could be right
“Our survival is only a question of 25, 50 or perhaps 100 years,” the oceanographer [Jacques Cousteau] warns in The Man, the Octopus and the Orchid. “It is absurd and dangerous for those who live in prosperity to think that the world economy is a cycle and that its riches will circulate for ever. Unrenewable resources are being squandered. Waste is building up. Valuable goods are vanishing while rubbish thrives.” M Cousteau, who won multiple honours for his scientific films and books from governments around the globe, attacks politicians, scientists and world leaders with particular venom. “They pocket the cash without looking ahead, writing cheques our descendants will pay for in the centuries to come. With their pesticides and pollution, their toxic discharges and the certainty of mutual destruction . . . the scientific experts have hidden the harsh reality: They will decide whether we live or die.” (Times, 21 June.)