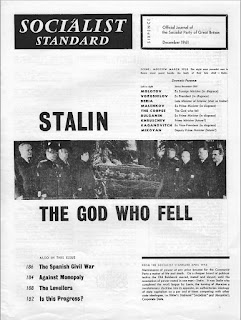 Party News from the December 1961 issue of the Socialist Standard

Here is a way of increasing sales of the Socialist Standard. For eight shillings a year a copy will be sent to any address in the British Isles. A small amount of money really! Why not persuade a friend to take a subscription for 1962, or pleasantly surprise someone with a gift of one year's “Standards”? It is very simple. Complete the form on page 191 and return it to us at 52 Clapham High Street, with of course the 8s. postal order.

Over 57 years the Socialist Standard has held the torch for Socialism. Consistent, searching and uncompromising has been its advocacy for Socialism. But still our Party journal must be brought to more and more people. The greater its circulation the greater will be the impact of Socialist propaganda, and incidentally, the more economic will be the "Standards" cost of production.

Resolve in 1962 to increase your sales of the Socialist Standard, and redouble your energy in spreading the case for Socialism.

Wembley Branch were delighted with the success of their first indoor, public meeting on October 30th. “Introducing the SPGB" was Cyril May to a sizeable audience, mainly non-members. More than half the time was devoted to questions and discussion, and the audience took full advantage of it. Collection and literature sales were encouraging. Now for another and more ambitious venture in the near future!

The Branch’s winter lectures are in full swing with a wide range of subjects, every other week. Full details will be found under meetings on page 192. All those who attend will find the meetings stimulating and worthwhile.

Wembley is holding their Xmas Social on December 16th at the Ealing Park Tavern. "Joe's Group” will supply the music, and a repeat of last year’s success is certain. Everything will be laid on, and if you don’t enjoy yourself, it will be your own fault. Full information is on page 191.

Ealing Branch is continuing its winter activities with a showing of Eisenstein’s film "Strike” on December 8th. Comrade Ambridge is providing the comment. Owing to the length of the film, please note that the showing will begin at 7.45 p.m. prompt. Further lectures and film shows are being planned for January, February and March 1962.

Blackpool Lights. Reference was made in this column last month to a literature selling trip made by some members to the Blackpool Labour Party Conference. They hired a van, and throughout the week sold literature, inside and outside the Conference hall, held meetings, and made themselves known very effectively as representatives of the only Socialist Party in the country.

The van was decorated with Party posters and banners, and was stationed at various key points for literature drives and outdoor meetings. Sales totalled £9 6s. 0d. The detailed story of our comrades activities makes interesting reading, but unfortunately space limits us to this very brief report.

What must be said is that the trip was most successful, and the propaganda value was probably much greater than can be assessed at the moment. Next year it is intended to repeat ventures like this, and their growing success will be in no small measure due to the hard (though pleasurable) work done by our comrades this Autumn.

The debate organised by Paddington Branch on October 29th almost didn't take place, and then not quite. Mr. Headicar, the CND representative, “sat down” the previous Saturday and got himself two months imprisonment. At the last moment Mr. S. Cash agreed to put the case for CND. He maintained that Socialism was alright as a theory, but mankind was faced with annihilation and all our energies should he devoted to "banning the bomb.” The SPGB were out of contact with the real world, and death would overtake us all, notwithstanding the propagation of Socialist ideas, unless nuclear weapons were abandoned.

In reply: Melvin Harris for the SPGB showed that CND was similar to many other bodies, which had sprung up in the past, attempting to tackle one or other evil of the capitalist system. These organisations had failed, and CND would fail for the same reason. Nuclear war can not be separated from the problem of war itself. And the constant threat and possibility of war was a direct consequence of the existence of capitalism. The Socialist Party were opposed to all war, and were working for the establishment of Socialism, in which war would be impossible. This was the most important task facing mankind.

A considerable number of questions were put to both speakers, and many of the audience of 200 took part in the discussion. There was not nearly enough time for everyone. The collection was £13 and literature sales were good. Perhaps one day we shall land a debate with the elusive CND?

Obituaries
With sadness we have to record the death of two comrades, Llewelyn McKone and George Sword. Llewellyn McKone died on October 18th at Swansea. He had been a member of the Party since well before the war, and for many years was a member of Wood Green Branch. In recent years he had been working hard with our Swansea Comrades.

George Sword died at the end of October after a short illness. He joined the Party in 1942 and was active with a small group of members at their place of work, where they discussed Socialism and sold literature to their fellow workers. He was a member of Central Branch and until a year ago, when his health began to deteriorate, he worked in the Party Library and helped in the despatch of the Socialist Standard to subscribers.

To both our late comrades' families we extend our deepest sympathy.
Phyllis Howard

Richard Headicar, the CNDer in the Party News report who couldn't attend a debate because of his activity in direct action, ended up joining the SPGB 20 years later. He is still a member of the SPGB to this day.

The S. Cash who stepped in, in Richard Headicar absence, was the ex-SPGB member Sammy Cash. He'd been an incredibly active member of the SPGB for over 20 years before he resigned from the SPGB in the mid-fifties.