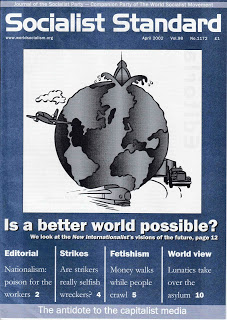 From the April 2002 issue of the Socialist Standard
Last year the New Internationalist asked its readers for “their own vision of a better world”. Under the titles of “Give Us Your Dreams” and “Another World Is Possible” shortened versions of twelve of the replies were published in the January-February issue of the magazine which supports the broad “anti-globalisation/anti-capitalist” movement. Three of these came from members of the World Socialist Movement.
Since the proportion of socialists amongst the “anti-capitalists” is nowhere near 25 percent (if only it were) this can be interpreted as a sign of a lack of vision, or interest in “grand schemes” for a better world, amongst those who are involved in the movement. They have yet to take on board our view that it is not enough just to be “anti”, but that to get anywhere you have to have a clear idea of where you want to go.
Having said this, two of the other replies chosen for publication also envisaged a world without money. One, from Minneapolis in the US, wrote: “I can imagine a global community with no private property beyond immediate possessions, no need for money, no racism or sexism, no enslavement of children, no profit motive to drive the oppression of working people, no battles over personal interpretations of spirituality, and no disrespect for the 'other'“. The other, from Canada, envisaged “a society where the concept of exchange is non-existent” but then went on to propose a system of consumer vouchers which would be issued to everybody in equal amounts and be cancelled on use.
Reformist
Of the other seven, one represented the reformist wing of the movement and proposed a list of “reforms that would be necessary as preliminary measures before more radical programs could be considered”. These included renegotiating trade agreements, a Tobin tax, changing company law, tax incentives to encourage co-operatives, ending nuclear power, etc, etc, etc.


This is the approach of the campaigning charities and non-governmental organisations such as OXFAM, Christian Aid and the others who are the most vocal section of the “anti-globalisation” movement, probably reflecting the views of most of those active in it. Not only does such a reformist approach lead to compromise with capitalism but the reforms proposed are piddling compared with what is needed to end world poverty, protect the biosphere and stop the waste of armaments. That it leads to compromise with capitalism can be seen by the number of activists who have switched sides and gone to work for government bodies and private corporations, believing that you can do more to get piddling mini-reforms from within the system than by pressure group politics from outside. No doubt such individuals are for the most part entirely sincere since they never really did think that there is any practical alternative to the profit-motivated market system. The history of Green Parties everywhere is another illustration of this point, where they have either joined capitalist governments or would if they got the chance.
As to the effectiveness of the reforms proposed, does anyone really think that tax reforms and legislative charges are going to be enough to bring about the massive increase in the production of food and other basic goods and services needed if there are not going to be more people, in absolute numbers, living without basic amenities in 2030 than there are today? Clearly “radical programs” not “preliminary measures” need to be considered right now, today. That makes trying to empty the ocean with a teaspoon – or even a tablespoon – a waste of valuable time. 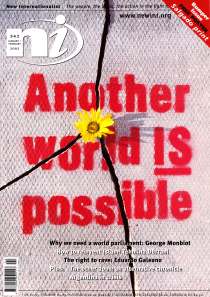 Pathetic
The other replies were, frankly, pathetic, indeed disheartening because they suggest that more people in the anti-globalisation movement entertain these kinds of views than envisage a global change in society, even by reformist means. Three advocated a return to the “simple life”. One looked forward to oil running out forcing people to “return to the land, working side by side with nature, in blissful harmony”. Another urged people to “buy locally and buy certified organic” and to “grow some of your own food” (why not, but as a solution to world problems?). A third wanted a “culture based on cottage industry and gardening”.


But the worst, and most disturbing, came from people expressing religious views. One claimed that “over history our collective subconscious has invented a basic code for humanity to live by, in the form of religion” and that this meant that humans had a “predisposition to co-operation, love, non-violence and selflessness”. This could be seen as harmless mysticism – there is no “collective subconscious”, how could there be, given what we know about biology and inheritance? – but at least this person's heart was in the right place. The same, however, cannot be said of the other two.
One put the more traditional religious view (which explains why these people put our backs up so much) that “no human system, no matter how carefully and idealistically crafted, will create a better world. All in the end are corrupted by self-interest or greed. Eliminating poverty is impossible . . . Only one thing works – the inner change for the better in individuals who have had some kind of illumination from a supernatural entity”. This view was echoed by the other, who wrote that “the ideal world, as it stands in our current understanding of the term, is simply unreachable” and proposed that “the alternative state of global perfection, and an eminently achievable one, consists of not having everything we want, but being totally satisfied with everything we have”.
Clearly, such views are quite incompatible with those of socialists – and not just of socialists but of reformists too. In fact the New Internationalist itself must have been disappointed to have had such replies, presumably more than the two they published. “Eliminating poverty is impossible” and “be totally satisfied with what you have” are what the rich, through the religious ideology that reflected their interests, have always told the poor throughout the ages. We have no choice but to be implacably opposed to such views and to combat them whenever we hear them.
No, eliminating poverty is not impossible and, no, the millions of people who go to bed hungry every night or who lack clean running water or who have no health care or education should not be happy with what they have (not) got. They should be bloody annoyed and upset about it and get together with the rest of us to work for a better world, here and now, down here.
Practical
Not that it is a question anyway of dreaming up a “perfect” or an “ideal” world. What is at issue is establishing a better world, where those problems that people face because of the way society is currently organised can be tackled with some hope of success. The starting point for this is not some idea of a perfect society but the world as it is today. It is rather a question of finding a practical solution to actually existing problems that have arisen at this particular moment in the history of humanity.


Over the past hundred or so years the world has developed the capacity to adequately feed, clothe and shelter every single man, woman and child on the planet. The resources, the technical knowledge and the skilled personnel exist to do this – the information on what to do is lying gathering dust in the archives of the Food and Agriculture Organisation in Rome and the World Health Organisation in Geneva – but it is not done because the world is currently organised on the basis of the minority class ownership of productive resources and the production of wealth with a view to profit.
It is this profit system that stands in the way of satisfying human needs. It only allows production to take place in response to needs that can be paid for and then only if a big enough profit can be made from doing so. It diverts resources into maintaining a whole superstructure of finance and commerce – banks, insurance, accounting, advertising, etc – that is only needed because there is production for the market. And it diverts yet more resources into armed forces and their weapons which every state is compelled to have in view of the competitive struggle for profits – which as a last resort involves war – that is built-in to the system.
Once this artificial scarcity and this built-in waste is eliminated, as it would be in a world where the Earth's resources had ceased to be the private property of states, national and multinational corporations and rich individuals, then these resources could be directed to turning out wealth to meet human needs. It may take some time to completely clear up the mess left by the capitalist profit system, but people dying of hunger could be stopped immediately. So could all problems arising from money worries.
This is the practical solution to the practical problems facing humanity at this particular stage of its historical development. Unless this basic change from class ownership to common ownership, permitting the change from production for profit to production to satisfy human needs, is made, then unnecessary human suffering and a generally unsatisfactory life for everybody except a privileged few will continue.
Yes, another world is possible, but it doesn't involve going back to basic agriculture, even less embracing pessimistic and do-nothing mysticism, but accepting that we already live in one world and going on from there. The solution is global in both senses of the word. Global in that it has to be world-wide, and global in the sense that the change-over has to be all-embracing and not piecemeal reform.
Adam Buick
Posted by Imposs1904 at 9:54 PM