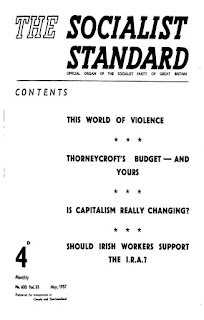 The Workers’ Paradise in Russia

When a Communist or Communist-dominated delegation visits the Soviet Union they generally publish a report containing much praise and wonderment at the marvels of the Moscow Underground, the Kremlin Palace, the Church of St. Basil, and the new Moscow University building; but they say very little about the life—and living conditions—of the ordinary workers and peasants of Russia. When a non-Communist delegation visits the Soviet Union the position is often reversed.

Last year an official Mineworkers’ delegation went to Russia. They have just published their report, summarised in the Manchester Guardian (15/3/57). They visited Moscow and a number of other towns, where they found that “an average of sixteen people are housed in a living space equal to a British council house.”

They report that hours of work exceed those worked in the mining industry in Britain; and “women in the Soviet Union are in many cases required to do work that is the hardest of manual work—to work in the pits, to do the heaviest types of jobs, including the handling of heavy materials and the mixing of concrete on the surface.”

And this the Communists call “Socialism.” Some Socialism!

Socialists have always claimed that things are not produced to satisfy people’s needs, or to last long—if it can be helped. Most things today are cheap and shoddy. But if it was not for the fact that things are produced primarily for profit, some things if desired, could last virtually for ever. For example. The New Scientist (14/3/57) brings us an interesting story about glass—and tableware.

A leading glass manufacturer is producing some tableware which is very strong: plates can be crashed together like cymbals, and nails knocked into wood with the bottom of a glass with little or no damage done. But, continues the New Scientist, even stronger glasses and plates could be produced. But this would be uneconomical for the producers.

During the last war drinking glasses used by the American marines had a life of only seven trips to and from the kitchen. A specially strengthened glass was then produced which lasted nearly one hundred trips. But, alas, the manufacturers found this unprofitable. Eventually, a glass was made toughened only round the rim which lasted an average of twenty-three trips. Such are the workings of our present society. A sane society would produce glassware—and everything else—solely for people's use. because they wanted it; and only the best would be made.

The Perversion of Science

It has often been claimed that scientific discovery and development is misused and perverted in our modern capitalist society. The following passage from The New Scientist (14/3/57) bears this out.

"In Europe, the search for better navigational methods arose from the desire for trading and from the warfare that ensued. Harrison's famous chronometer, which he perfected in the eighteenth century, was made in order to win an Admiralty prize of £20,000 for a method of determining longitude at sea. Even today progress in navigation is usually to meet military needs, and now it is the development of guided missiles which is throwing up the commercial navigation of the future."

According to the people who are supposed to know—in Archer Street and Fleet Street—Rock 'n' Roll is on the way out, and the Calypso is in. But, so far, those who have cashed in on “Rock”—Tommy Steele, Winnie Atwell and others—are still “coining the loot,” and very few Calypsos have been heard yet on the radio. This writer does not think that the Calypso will be such a money-maker as Rock Y Roll with its simpler beat and lyric, its noise and gimmicks. Anyway, if the Calypso is going to take the place of Rock 'n' Roll it will have to be “cleaned up” a bit, since many of its lyrics are hardly suitable for the B.B.C., or the record companies. For example, “Chinese Children Calling Me Daddy”:—

For the time being it looks as though we shall be stuck with Elvis Presley’s Hound Dog or Bill Haley's Don't Knock the Rock. There's more money in it; and it won't upset anyone's moral susceptibilities!

The Church and Socialism

In Britain only about 10 per cent. of the population regularly go to Church, although many more say they believe in some sort of a god or Creator, whereas in the United States about 60 per cent. are Churchgoers. The American workers, it seems, are more superstitious than their British counterparts. But even in Britain, one Church—the Catholic Church—claims 3,000,000 members (including the backsliders?). All the various Christian churches and sects oppose Socialism, but the Catholic Church is possibly the most vociferous in its opposition (and misrepresentation) of Socialism.

In a pamphlet called Socialisation, and “published with the authority of the Archbishop and Bishops of the Catholic Church of Australia,” we are told that “Socialism, in its strict sense, is a theory which advocates that the State should take over and operate the entire machinery of production, distribution and exchange.” That this statement is a complete lie from beginning to end does not worry our Catholic Bishops and Archbishops. For the information of any Catholic who may read this column, Socialism means the common possession of the means of life; an absence of a state apparatus, and no machinery, or means of exchange.

Man will no longer pray for his daily bread; he will just make it and consume what he requires!

It is not only the Catholic Church which propagates the figment that State ownership of the means of production is Socialism. Political parties, such as the Labour and Communist Parties, also make the same claim. The Communist Party, which, when it suits, boasts of its support of the theories of Marx and Engels, is perhaps the most shamefaced. For did not Engels explode this hoary old idea for all to read. In his book, Socialism : Utopian and Scientific (which all workers should read), he writes:—

"But the transformation . . .  into State ownership does not do away with the capitalistic nature of the productive forces. . . . The modem State, no matter what its form, is essentially a capitalist machine, the state of the capitalists, the ideal personification of the total national capital. The more it proceeds to the taking over of productive forces, the more does it actually become the national capitalist, the more citizens does it exploit. The workers remain wage workers—proletarians. The capitalist relation is not done away with. It is rather brought to a head. But, brought to a head, it topples over. State-ownership of the productive forces is not the solution of the conflict, but concealed within it are the technical conditions that form the elements of that solution” (pp. 71-72)

With the establishment of Socialism the State dies out. “State interference in social relations becomes, in one domain after another, superfluous, and then dies out of itself; the government of persons is replaced by the administration of things and by the conduct of processes of production” (pp. 76-77).
Peter E. Newell