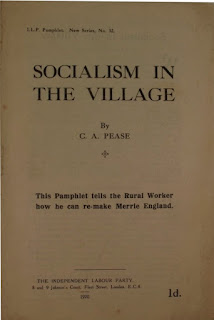 Pamphlet Review from the March 1921 issue of the Socialist Standard

This is the title of an I.L.P. pamphlet written by Mr. C. A. Pease for the rural workers, professing to tell them how to remake “Merrie England.” The last and most successful attempt to organise agricultural labourers has opened a new and promising field for political propaganda, and the I.L.P. no doubt hopes to compensate itself here for the loss of numerous members who could not resist the charms of the British Bolsheviki. For this purpose the pamphlet may be useful enough, but its educational value to the workers is just nothing. It is almost to be regretted that it is simply written and costs only one penny.

To start with, there is nothing in it about Socialism.

Mr. Pease begins by saying that the war has left the villages unchanged. This is hardly correct, but curiously enough, the one thing of vital importance to the workers, their exploitation, which must necessarily remain while capitalism lasts, is utterly misunderstood by him.

There certainly have been movements worth noting. First, there has been a striking development both in the technical side of agriculture and in working conditions. The acute shortage of food and labour, arising out of the war, has led to an enormous increase in the use of labour-saving machinery, and at the same time the machinery itself has undergone rapid improvement. The growing use and simplification of the milking machine during the last few years are but one instance of this. The effect of the minimum wage clause of the Corn Production Act, and of we spread of trade unionism, has been a very considerable reduction of hours, accompanied, as was to be expected, by a proportionate intensification of labour. If a farmer has to pay fixed minimum wages for a certain number of hours, he will see to it that no time is lost, and whereas farm life in the past may have been somewhat leisurely, it is no exaggeration to say that now every minute counts. It is the boast of the new type of farmer or farm manager that his men have to work under factory conditions, in spite of the repeated cry that industrial methods couldn’t be applied to agriculture. In addition there has been, of course, an equal change in the kind of skill required of a competent farm hand; the man who drives a tractor is expected as well to be able to do his own repairs, or at least to know sufficient to be able to locate faults in his engine.

Secondly, rising prices of farm produce and land have been the cause of great activity in buying and selling agricultural property. Increased profits have enabled tenant farmers to clear themselves of debts and mortgages, the relic of pre-war stagnation, and purchase their holdings while the former landowners have been only too pleased to sell out at double and treble 1914 prices, as they have been able to do. The countryside can almost be said to have changed hands. Although he does not understand how it happens, Mr. Pease realises that both farmers and landowners live on the agricultural workers; he sees there must of necessity be a struggle between employer and employed over the division of the produce of the latter's labour, and that organisation helps the workers to  get a larger share than they otherwise would. He then, however, makes the following sweeping statement:


"But no sooner have wages risen in agriculture, as in other industries, then farmers and manufacturers, shipowners, coal owners, and the employers of every sort, have raised prices to such an extent that their profits, far from falling, have been greatly increased, while the wage earners find themselves little, if any, the better for their rise in wages."

One naturally wonders why, if this is true, the I.L.P. does not advocate the break-up of the unions, except for the fact that it derives much of its support from them.

If the capitalists can raise their selling prices at will, why do they fight against demands for wage increases? and why should they delay price juggling until after higher wages have actually been given? Why should prices in Germany have increased so much more and prices in America so much less than in this country? Why in 1914 did prices jump sometimes as much as 50 per pent, while wages had an opposite tendency ? The fact of the matter is, of course, that a manufacturer or farmer always sells his goods for as much as he can get, and if a farmer asked 70s, for a quarter of wheat, and imported wheat was being sold at 40s., well, he might go on asking and asking and asking; Wage increases cannot be passed on in this way. Rising' prices compel the workers to demand more in order to live; the existence of unemployed will always prevent them from getting much more than the bare necessaries of life and they frequently get much less.

Mr. Pease has the usual I.L.P. attitude towards the State.. He says “when the Government makes any genuine attempt to control prices it is met by the difficulty that farmers and manufacturers will cease to produce goods unless they are sure of a profit which will satisfy them.” What is a “genuine attempt to control prices”? The Government represents the interests of the capitalist class; it must on occasion, such for instance, as when famine threatened during the war, artificially stimulate production and limit a too extravagant soaring of prices, but can it seriously be expected to control prices in the interests of the workers and to the detriment of any considerable section of the employing class?

Mr. Pease continues: “By combining and forming trusts, capitalists have now become so powerful that they can defy trade unionism and even Parliamentary control.” Mr. Pease has yet to show when the capitalists were not in a position to “defy trade unionism," but it is the concluding few words which are the real puzzler. When Mr. Pease has explained how the capitalists have become so powerful as to defy themselves, perhaps he will answer the following question put to a religious orator: "Can God make anything so heavy that he cannot lift it?"

Still, even if he does not understand the working of the capitalist system our author tells us how to end it, "Make capital as well as land public property"; “as long as capital is owned by individuals the capitalist will control trade and industry”; “By capital is meant not only money, but such means of producing wealth as buildings, machinery, rolling stock, mines, etc.” What is meant by "public ownership of money” must he left to the economists of the I.L.P. to explain, but the rest is clear enough. Capital is to be owned collectively by the State instead of by individuals. The Post Office is instanced to show how it would work. The workers are to have “a really sufficient livelihood,” and the surplus will be used for “public services—and the expenses of government.” That “expenses of government” means interest paid to our old friend the capitalist, and if the standard of living is that of the postal workers, or say the clerks employed by the I.L.P., the surplus left for the interest will be big indeed. It is, of course, unfortunate that the postal workers should choose this moment to decide that it may be necessary for them to strike to better their conditions. Mr. Pease does not attempt to explain how the paying into the Treasury of profits made in the Post Office benefits the workers either in or out of the postal service.

Our reformer has difficulty in making up his mind whether the landowners ought to be compensated when the State takes over, but decides finally that they may, because “it can be done without costing a penny. The landowners shall he given Government bonds in return for the land, the interest on which will be more than covered by the rents paid to the State. ” It is all so simple that one wonders why its discovery should have been left to Mr Pease, who doesn’t appreciate the real beauty of it. This will be the position. The “people” will own everything, including the land; they will let the land to themselves, pay themselves rent, hand some of it over to the ex-landowners for giving them their own property, “all of which will cost the nation nothing.”

To make it doubly secure the nation “can recover any part it pleases of the bond-holders incomes by means of the Income Tax.”

He probably thought it might not be quite convincing, so he naively adds, “however, we are more concerned with the results of Land Nationalization than with the method by which it will be carried out.”

This means that Mr. Pease, and presumably the I.L P., does not aim at the abolition of wage slavery, but only at the improvement of the position of the slaves. It will no longer be possible to argue that “farming won’t pay unless the labourer is a low-paid wage slave.” He has not grasped the fact that capitalists normally make profit by paving for labour-power at its value in the cost of keeping the labourers and enabling them to reproduce themselves.

All that Mr. Pease has to offer the agricultural labourer is already guaranteed him by the Corn Production Act, but apparently the I.LP. has room for farmers too. They are to get “security of tenure” and “compensation for improvements” which, however, are already promised in the Government's Agricultural Bill; in return they must undertake to cultivate their farms according to the laws of good husbandry—here again Mr. Lloyd George has forestalled Mr. Pease.

In case the workers prove sceptical our author produces the goods—in Australia, in the shape of the State agricultural enterprises of the Queensland Government. The I.L.P. used to be very keen on the Australian Labour Governments, but just recently Mr. Ramsay Macdonald has found another “typically I.L.P. State ” in Georgia. Perhaps some disillusioned victims of this earthly paradise have been declaring that it is all moonshine.

The “Daily Herald” recently indignantly repudiated the suggestion that under nationalisation the workers would be forbidden to strike. What they, and Ramsay Macdonald, have to explain is why strikes should be necessary.

Mr. Pease has the same difficulty. His theory requires the Trade Unions to make a graceful exit; it really is unkind of them not to do so. “As a fighting force, protecting Labour against Capital, it should no longer be required.” But the Trade Unions will still be necessary "to guard the interests of their members.” Against whom? Mr. Pease does not say.

However, he makes the best of a bad business and turns the Union into a Guild, which solves a whole host of difficulties. The Guild, however, has its problems too. The Guild will control the farming industry and will therefore require capital; it then “might easily become a wealthy corporation, making profit at the expense of the community.”

There are heaps of other delightful things that might (and might not) happen which as Mr. Pease says, “would be pleasant and interesting to picture,” but it is to be feared that if the agricultural labourers read such rubbish as this it will be a long time before we see “the country gentry retiring from the countryside” and handing over their mansions to the workers. As I would not like to think that Mr. Pease had laboured in vain might I suggest that the I.L P. supply this pamphlet to the “courtly, kind- hearted country gentry” to help lighten the tedium of rural life for them ?
Edgar Hardcastle
Posted by Imposs1904 at 7:40 AM