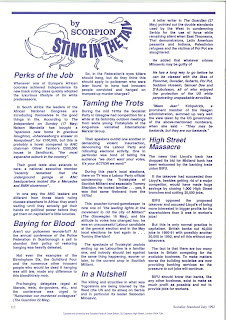 Perks of the Job
Whenever one of Europe’s African colonies achieved independence its new black ruling class quickly adopted the luxurious lifestyle of its white predecessors.

In South Africa the leaders of the African National Congress are introducing themselves to the good things In life. According to The Independent on Sunday (17 May) Nelson Mandela has bought a "spacious new home in gracious Houghton, Johannesburg's answer to Hampstead", for £100,000, but this is probably a hovel compared to ANC chairman Oliver Tambo's £500,000 house in Sandhurst, "the most expensive suburb In the country".

Their good taste also extends to cars: a national executive member "recently remarked that the underground garage at ANC headquarters looked like a Mercedes and BMW showroom".

In one way the ANC leaders are different from those black ruling classes elsewhere in Africa: they aren't waiting until they actually get their hands on political power before they get them on capitalism's little luxuries.

Baying for Blood
Aren't our policemen wonderful? At the annual conference of the Police Federation in Scarborough a call to abandon their policy of restoring hanging was heavily defeated.

Not even the examples of the Birmingham Six, the Guildford Four and the numerous other innocent people who would be dead if hanging was still law, made any difference to this bloodthirsty mob.

Pro-hanging delegates raged at liberals, wets, do-gooders, etc., and the conference was urged to "Remember our murdered colleagues" (The Guardian 22 May).

So, in the Federation's eyes killers should hang, but do they think this should apply to policemen who were later found to have had innocent people convicted and hanged on trumped-up murder charges?

Taming the Trots
During the mid 1970s the Socialist Party in Glasgow had competition for a while at its Saturday outdoor meetings from some young Trotskyists of the long-since vanished International Marxist Group.

Their speakers outdid one another In demanding violent insurrection, denouncing the Labour Party and ridiculing electoral activity. One in particular was fond of telling his audience "we don't want your votes, It's your ACTION we want!"

During this year's local elections, there on TV was a Labour Party official condemning the Trotskyists of Scottish Militant and especially Tommy Sheridan. He looked familiar. . . yes, it was that same firebrand from the 1970s!

This poacher-turned-gamekeeper is now one of "the leading lights in the movement to rid the city of Militant" (The Glaswegian 16 May), and his attitude to votes has changed too: he was an unsuccessful Labour candidate at the general election and in the May local elections he lost again to . . .  Tommy Sheridan!

The spectacle of Trotskyist zealots ending up as Labourites is a familiar one, and nobody should bet against the same thing happening, sooner or later, to the current crop in Scottish Militant.

In a Nutshell
The killing and atrocities in what was Yugoslavia are being blamed by the West (the US and Its allies) on Serbia and in particular its leader Slobodan Milosevic.

A letter writer in The Guardian (27 May) pointed out the double standards used by the West in condemning Serbia for the use of force while remaining silent when East Tlmoreans, Thai demonstrators, Latin American peasants and Indians, Palestinian refugees and the victims of Pol Pot are slaughtered.

He added that whatever crimes Milosevic may be guilty of

He has a long way to go before he can be classed with the likes of Pinochet, Duvalier, Suharto, Pol Pot, Saddam Hussein, Samuel Doe and D'Aubuisson, all of who enjoyed the protection of the US while perpetrating unspeakable atrocities.

"Mean Jeane” Kirkpatrick, a prominent member of the Reagan administration, summed up very well the view taken by the US government of the above-mentioned murderers, when she said - "They may be bastards, but they are our bastards."

High Street Massacre
The news that Lloyd's bank has dropped its bid for Midland bank has been welcomed by the banking trade union BIFU.

If the takeover had succeeded then Lloyd's, besides getting rid of a major competitor, would have made huge savings by closing 1,000 High Street branches and cutting 20,000 jobs.

BIFU opposed the proposed takeover and accused Lloyd's of being more interested in bigger profits for its shareholders than it was in worker's jobs!

The fact is that there are too many banks in Britain competing for the available business. To make matters worse the building societies are now providing banking services so the pressure to cut jobs will continue.

BIFU should know that banks, like any other business, exist to make as much profit as possible and not to provide jobs for workers.

Did a bit of digging and the Glasgow based International Marxist Group firebrand from the 1970s who ended up nice and cosy in the Scottish Labour Party establishment in the 1990s was Stewart MacLennan. Listed as T.A.S. MacLennan he was the Labour Party's parliamentary candidate in the 1992 General Election for the Tayside North parliamentary constituency. He finished a distant fourth behind the Tories, the SNP and the Lib Dems.

Fast forward to 2015 and he is briefly mentioned on the internet as now being a supporter of the SNP. In short, a life long political hack.