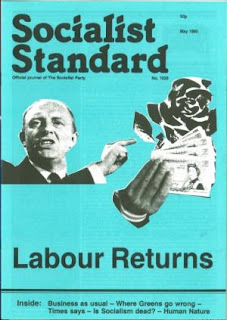 From the May 1990 issue of the Socialist Standard

Why on earth aren't there more socialists about? It surely can't be because the daily newspapers (at least, those that are referred to as the quality papers since they are supposed to provide news rather than gossip) don't reveal all about the society we live in, namely capitalism, a class-divided society with the rich and privileged on the one side and the deprived and struggling on the other. This writer happened to have had a little extra time to go thoroughly through a recent issue of The Times.

You can choose any issue you like and you'll nearly always find something along the lines of the following. Casually turn over a page and there's a picture . . .  47, Grosvenor Sq. in Mayfair described as “having a discreet facade" harbouring “an opulent interior. . . hiding one of the most expensive homes in London". In case of visitors or a large family "there are 10 bedrooms, 10 bathrooms, six reception rooms, swimming pool, gym and sauna, all decorated in the style of an Arabian palace, including tented ceilings, huge chandeliers and ornate mouldings picked out in gold." Not bad, eh? and we're told “it's a snip at £15 million".

Well, we heard that the East Germans had a fit of apoplexy when they learnt of the high-style living and larks of Honecker & Co. but dear Erich, even if he could have monopolised half his comrades' privileges, could not have matched this, so how are the East German workers going to react now that they have the blessings of the free market bestowed upon them, and with those in the upper spheres above them enjoying the aforementioned trappings?

Leaving this for the future to work out, one would have thought that the Editor would have been careful about where to place the above item, but no! Right underneath, as if to lend point and contrast, we find a report which tells us that the National Audit Office (a money-saving watchdog committee acting conscientiously on behalf of the capitalist class) is deploring the fact that £11 million is spent "needlessly" because doctors are too liberal in giving out sick notes to workers for benefit claims. That means that if you're not feeling quite yourself one morning and not inclined to join the scrum to get to work and then having to face those dreary hours till knocking off time, and then the bustle of the return journey, think twice before rushing off to the doctor. We're told that even a 1 per cent drop in these untaxed (shame!) benefits would save £11 million but, just think, even this sum wouldn't be enough to buy that two by two in Grosvenor Sq. We're also told that the basic rate of Invalidity Benefit is £43.60 a week although (heaven be praised for the generosity of the capitalist class) in certain cases this can rise to £60 or (wonders will never cease) to £100 per week. One small point, though: these sums would not be sufficient for the upkeep of the premises mentioned above.

Tarred with same brush
Not to labour the point (does it need labouring?) let's turn to another page. Now, we've heard recently, over and over again from all directions, about the end and demise of Communism or, as one BBC programme had it, "The flight from Communism". It so happens that this programme was dealing with the events in Poland, and it also happens that in this issue of The Times a correspondent in Poland informed us that a lot of former secret police of the Interior Ministry are turning to making an honest living by acting as private tecs, but who and what for? “It is to protect rich businessmen who feel nervous in the classless(!) society". Amongst other things their brief:

is to protect private villas, private shops and warehouses, transport valuables, etc. Crime is rising quickly everywhere. A particular target for thieves are houses with expensive satellite dishes—in Poland a sign of substance and wealth. Millionaires abound . . . there are jewellers, perfumers, cake wholesalers, sunglass manufacturers, computer importers and money changers who have become de facto private bankers. One detective agency assured us that 'when the Western capitalist comes here we can provide the finest bodyguards' (Times. 12 January).

Turning to another page we find the story of John Smith, the Shadow Labour Chancellor being piqued by the suggestion that Labour's policies would impose huge burdens on business and spending "huge amounts of time in boardrooms and at City dining tables explaining how a Labour government would get manufacturing industry on its feet again". Now did you think these industries were flat on their faces? You wouldn't think so looking at some of their profit and loss accounts in the financial pages.

On another page, there's Maggie going on something awful about the workers asking for more money in their wage packets . . .“very disturbing”, "jobs at risk”, “Britain's wage costs higher than main competitors”. "wage costs must be kept down", but at the same time “it was essential to keep higher interest rates going for the foreseeable future".

As we socialists say, they're all tarred with the same brush and, as Mercutio put it in his last moments (and we hope fervently that the working class will not wait until such an eventuality), "A plague on both your houses".
Max Judd
Posted by Imposs1904 at 5:35 PM