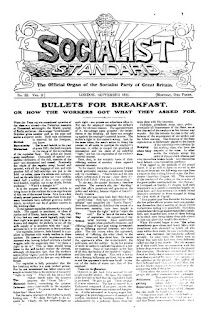 From the September 1911 issue of the Socialist Standard

A not uncertain test of a book's worth is the interval that elapses between its publication and its relegation to the second-hand bookstall. Hardly had the world been startled by the announcement of the appearance of "The Superstition called Socialism,” when I observed a copy in a dealer’s box. Taking advantage of the proprietor's amiability, I sampled at random the choice pearls of thought that are scattered throughout the work. Curious at seeing Kropotkin's name in the index of a book dealing with Socialism, I turned to page 108 and read :

“With that glorious revolutionary enthusiasm which inflamed the souls of our ancestors, let them wish to stab all tyrants there and then.”

This, from Kropotkin the meek, seemed, to say the least, curious, so I took an early opportunity of perusing his “Appeal to the Young” —the authority quoted—in order to verify.

A careful perusal revealed the astonishing fact that the sentence quoted appears nowhere in Kropotkin’s work, but is made up of two distinct fragments of sentences occurring pages apart.

‘‘This very day your favourite pupil . . .  recited the story of William Tell with so much vigour! His eyes sparkled; he seemed to wish to stab all tyrants there and then; he gave with such fire the passionate lines of Schiller.”

On page 23 Kropotkin invites poets, sculptors, painters and musicians to “fire the hearts of our youth with that revolutionary enthusiasm which inflamed the souls of our ancestors."

So the cunning Tunzelmann has to resort to the filthy practice of piecing together separate and unconnected utterances, and trotting the resulting patchwork out as an authorative statement. The mean and paltry shifts to which the “Anties” have been reduced in order to manufacture their alleged arguments have been long known to us. Their reluctance to and avoidance of debate; their dodging and wriggling out of questions; their garbled and incomplete statistics, are all phases with which we have become acquainted. To this must now be added the lie deliberate. Tunzelmann’s own explanation would be interesting. The incident is of importance as showing that the “Anties” are in a pretty bad way. We can safely assume that the methods of Ananias must be particularly commendable to those whose stock of truth is slender. We are given to understand that the “Anties” contemplate the publication of a new edition of the Bible (edited by Tunzelmann) in which, by a judicious re-arrangement of the text and a general bringing up to date, we shall read that 'What shall I do to be saved?” should be answered "Sell all that thou hast and give to the Anti Socialist Union.” We shall be exhorted to consider "What shall it profit a man if he gain his own soul and lose the rent of a block of slums?” It will include "Blessed are ye who grind the faces of the poor.” "Blessed are the bloodthirsty, they shall inherit the earth.” “Blessed are ye when men shall revile you, and persecute you, and say all manner of evil against you for working them 18 hours a day for 17s. 3d per week. Rejoice! and load up with ball cartridge, and blow them into the middle of next week, for so persecuted they the slavedrivers which were before you.” “Blessed are the meek, for they shall he trampled upon.” ; “Blessed are the poor in spirit, for they make jolly fine wage slaves.” "Blessed are they who handle truth very carelessly, apply for a job at the A.S.U."
Paris.

My guess is that - 'Paris' - was a one off pen name of a regular Socialist Standard writer. I remember reading somewhere that A. E. Jacomb, founder member, writer and printer of the Socialist Standard, would sometimes fill in gaps of the Standard under various pen names, when there wasn't enough material for that month's particular issue. It could be him, but the use of the name 'Paris' could also point towards F. C. Watts.