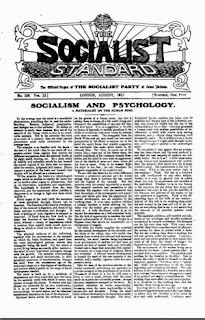 Editorial from the August 1917 issue of the Socialist Standard

The endeavour to prevent Socialist opinion on the war from making itself heard at any international congress continues to be prosecuted with vigorous tenacity. The instruments of the master class now resort to a congress to be held in London as a preliminary to the one proposed for Petrograd or some other Continental city. It is easy enough to see what the game is. The capitalist Government, with one eye on the "pretty kettle of fish” in Russia, are letting I dare not wait on I would in the matter of passports to the congress called by the Russians. They have already made it pretty clear that no Socialist organisation (there is only one in this country) need apply for passports, but they are afraid that the refusal might reach Russian ears and “give furiously to think” those armies of “our gallant ally” who have expressed their opinion of all “war aims” by withdrawing to the limits of their own frontiers.

Of course, this London congress is to be in the main controlled by the pro-capitalist crowd to whom the workers owe so much that it is to be hoped they will repay. This much is already revealed in the fact that the congress has had its chairman selected for it, and the appointed one is none other than that very-good jingo and prosperous capitalist henchman, Mr. Arthur Henderson.

The congress will, doubtless, be expected, under the guidance of this gentleman who, like most of us, has got his living to earn, to arrive at decisions and formulate and pass resolutions which shall convey the impression that Socialist opinion in the Western countries is behind their governments for the prosecution of the war “to a finish.” With a bit of luck, and a bit of clever chairmanship, even the awkward question of passports may be satisfactorily settled by appointing delegates for the later congress— perhaps even Henderson himself, for the “ majority,” and Mr. Ramsay Macdonald, for the "minority.” They are a precious and worthy pair, in whose bands the “war aims” of our masters would be quite safe.

In addition to the above, and perhaps not unconnected with it, there is to take place as we go to Press, a national conference of the British Labour Party to consider the question of representation at the Stockholm Congress. Mr. Bonar Law has expressed both his concern and the Government’s uneasiness in the incautious statement that he hoped the L.P. conference would decide not to send delegates to the congress which, it appears, is to be held at Stockholm. For this blunder he has been called over the coals by the capitalist Press, which complains that it creates a bad impression to even seem to attempt to influence the decision of “Labour.” So again there emerges what our masters are afraid of. It is the first time in our pretty lively recollection that the capitalist Press has thought “Labour” capable of dealing with its affairs without the advice of its masters and pastors and those set in authority over them, much less deprecate the intrusion of a mere outside wish into its councils.

In the background is that grim joke, the Russian defection. Just as the Statesmen of all the Western countries of the Alliance have scalped themselves in their frenzied efforts to demonstrate that the Russian formula “without indemnity or annexation” means the same thing as “reparation, security, the smashing of Prussian militarism, and the working out of national aspirations,” so now they would like it to appear that their refusal of passports fits in entirely with the Russian call to conference. If the London Congress, or the National Labour and Socialist Conference decide not to send representatives, or if, as is likely enough, they come to loggerheads about it, good, from the capitalist point of view. That leaves the Government at one with the “free and enlightened democracy,” and therefore democratic to the very marrow. Bat if delegates must be sent, then there is every argument in favour of those boon travelling companions, Henderson and Macdonald—both advocates of representation—being chosen.

So Ramsay Macdonald, who at one time appeared to-have “backed the wrong horse” in his attitude over the war, but who has probably by that attitude found favour with the Russians, who cannot be acquainted with the whole facts, will have opportunity to rehabilitate himself in the eyes of his paymasters, and to turn even his quasi-opposition to the war to their eventual service. Ready with the limelight, there, the performance is about to commence.