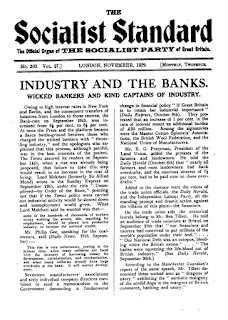 From the November 1929 issue of the Socialist Standard

Under the chairmanship of Mr. Herbert Morrison, M.P., the 29th Annual Conference of the Labour Party was held at Brighton during early October.

The Conference was the first to be held during the lifetime of a Labour Government, and the criticisms, therefore, were levelled at their own colleagues.

Mr. Herbert Morrison, in his opening address, reviewed the “record of success” of the Government, particularly in relation to foreign affairs, to which a great part of the time was devoted. He was received with satisfied applause from the whole of the delegates. Mr. A. Henderson, Mr. Philip Snowden, and Mr. J. H. Thomas were each allowed a day in which to state their respective parts in the “success.” Mr. Morrison was guilty of a lapse that was strange in one who recently announced that the Government (in which he is Minister of Transport) were the “friends of the business man.” He said (Daily Herald, October 1st, 1929):—

We go forward to make material wealth the servant of mankind and not the master of mankind. . . . We aim at a new society—the Socialist Commonwealth—not as an end in itself but as a stepping-stone to the mental and spiritual regeneration of mankind. . . .  It is a great change we seek, it can only be secured if the hearts as well as the minds of the people are elevated.

Such misty stuff might as easily have come from any parson or most of those politicians who sing the praises of the Capitalist system, save for the use of the words “Socialist Commonwealth.” Material wealth is the servant of “mankind.” The obstacle preventing the majority of mankind, that is the workers, from enjoying it is that the means and instruments for producing and distributing wealth are owned and controlled by a small section of “mankind”—the Master Class. From this ownership all the economic evils which afflict the working-class arise: poverty, insecurity, and a social existence that is limited to the production of wealth and the reproduction of themselves as wealth producers serving only to pile up wealth for their masters. We seek to change this by transferring ownership of the means of living from private hands to society as a whole. What is the change of heart necessary for this simple procedure? This tale of making yourselves fit for a new Society is the equivalent of the Christian doctrine of being good now in the hope of a reward in the sweet bye and bye.

An I.L.P. Bogey.
Miss Dorothy Jewson was responsible for resurrecting the latest side-tracking reform endorsed by the I.L.P.—family allowance. She moved a resolution calling upon the Government to introduce


increasing taxation of the wealthy to provide for a wide development of the social services, including an effective system of children’s allowances. (Daily Herald, Oct. 2nd, 1920.)

The debate on this question was a long one, and the remarkable feature about it was that most of the delegates were of the opinion that such a measure would be effective in permanently improving the conditions of the workers.

The price of the workers’ labour power on an average covers the cost of keeping himself and his family. If a worker receives from the State an allowance which covers the cost of keeping his children, then the wages he receives from the employers will fall to a level which will cover the cost of his and his wife’s keep only. Where and when such a scheme has been introduced it has been of benefit chiefly to the capitalists. The working class as a whole gain nothing from it.

On the appeal of Mr. A. Henderson to refer the question to next year’s conference, the resolution was lost on a card vote, the votes being cast in proportions of about 3 to 2.

Unemployment.
Mr. J. H. Thomas related his difficulties in trying to find work for the unemployed. He stated that

unemployment could not be solved by merely pouring out money, but by finding new markets for our goods.
The heads of railways, harbours, docks, and electrical undertakings, etc., had been invited by the Government to private discussion on providing employment by making machinery efficient.
(Daily Herald, Oct, 2nd, 1929.)

The process was not explained. Mr. Wheatley’s contribution to the debate was to the effect that Mr. J. H. Thomas was wasting his time. "While Capitalism remains there would also remain the victims of unemployment,” which was rather unkind of Mr. Wheatley, and also inconsistent with his own support of Capitalism and the Labour Party which administers it.
Jimmie, after all, was doing his best. And doesn’t he get £5,000 a year for trying so hard? Doubtless Mr. Wheatley is sore because he has lost the Ministerial job he had in 1924.

The debate showed that the delegates believed that the “problem of unemployment” could not be solved. Their main plank was that the administration of unemployment insurance by the officials of the Ministry of Labour was inhuman. It must be “humanised,” they said. Hell, humanise cancer or remove it!

It is surprising with what gusto and indignation the Labour Party will shout and make a great noise about effects while accepting their causes. Truly, “much ado about nothing.”

Disarmament.
Dealing with Mr. Ramsay MacDonald’s visit to the U.S.A. and the question of the reduction in the number of warships in the fleets of Great Britain and the U.S.A. respectively, Mr. Henderson “outlined his hopes for an early world conference and disarmament.” He said:—

If that conference comes up to our expectations we shall have opened up an era in which we may see the vast sums hitherto spent on armaments put to better purposes. (Daily Herald, Oct. 3rd, 1929.)

What does that mean? Nothing! On being called upon to answer a question put by a woman delegate concerning complete disarmament, Mr. Henderson said that “he only wished those who held the questioner's views would say what they meant by total or complete disarmament. If they thought the problem out they would see they were asking what was impossible. What they must get down to was reasonable police-forcing.”

Precisely, Mr. Henderson, and you are administrating the Capitalist System, and whilst it exists the interests of the different national groups of capitalists can be defended, in the last resort, only by force. But why the cant and humbug about disarmament and world’s peace. In the circumstances Mr. MacDonald’s visit to America is not a “mission of peace” or a question concerning “disarmament.” In the past, the bow and arrow, the sword, the musket, and many other primitive weapons have in their time been very efficient and up-to-date means of warfare. But as new methods are developed and introduced, so the older methods are relegated to the scrap heap as useless. To-day aerial and gas warfare has developed so rapidly that many comparatively new cruisers are as obsolete as the bow and arrow as a means of destruction. Aeroplanes loaded with the necessary implements could spread desolation and disease, and almost raze to the ground large towns and industrial centres in a few days. It is noteworthy that politicians are never heard proposing the abolition of aerial warfare and the instruments of it. A “war in the air” would be much cheaper than war fought under the older methods, and how easily civil aircraft can be quickly transformed into fighting planes. The way to abolish war lies not in painstaking attempts to get the capitalist class to disarm, but in the abolition of the capitalist system.

Similarly with our economic problems; if all the schemes of new bridges and roads; making the machinery of production more efficient; the “humanising of the dole”; earlier old age pensions, family allowances, etc., are put into operation, the workers would still be faced with the problems of Capitalism as they are at present. The only solution is its abolition and the establishment of Socialism.

The conference ended with the singing of the “Red Flag” to an accompaniment of a violin played by a Cabinet Minister (F. O. Roberts, Minister of Pensions).

Did they sing the third verse?

“It suits to-day the Meek and Base, Whose thoughts are fixed on Pelf and Place,
To cringe before the Rich Man’s frown,
And haul the sacred colour down.”

Apparently they did not.

It might have disturbed their happy and contented frame of mind. For Mr. George Lansbury, on being asked by a Daily Herald reporter, “What he thought of the conference,” replied:
“Fine, everyone is going home happy, and what more could you want.” (Daily Herald, 5/10/1929.)

Comment on that statement could only be made in words as lurid as Mr. Lansbury’s are placid.