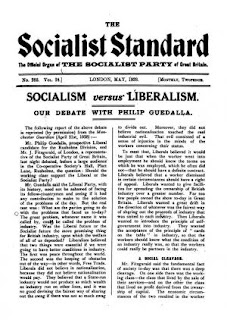 From the May 1928 issue of the Socialist Standard

Don’t you sometimes think that it might be pleasant if your day’s work finished at the same time as your husband’s—or the average working man’s—even though his working day is too long?

Don’t you wish you could have 1½ days “off” a week, free from the constant worry of meals and work, an opportunity to enjoy life along with your menfolk?

You cannot heave a sigh of relief when the hooter goes, even though you have worked all day. The hooter only calls you to more work when the family return to meals. Don’t you wish you could leave your thoughts of work behind you at the same time as most men do?

How often are you able to fulfil the hopes of your youth and spend happy evenings with your husband? You are too tired and too busy to share his leisure time with him.

Why be content to scrape along week after week and year after year without relief from the same monotonous work when there are so many who live in luxury and yet have never worked? Surely the reward of work should be pleasure, and not misery and more work.

Has it never occurred to you that, instead of pottering about in your home all day and a good part of the night, it should be possible for the work to be done collectively (as in hotels and institutions), and the children could have large, airy nurseries and large gardens instead of the stuffy living rooms they now have.

Wouldn’t you like your children to have the same opportunities as the rich person’s child?

The first few years of a child’s life are most important, as not only do they naturally require a lot of care, but until they are about five years of age they are not able to go out for air by themselves, and air, as well as good food, they must have to prepare them for the future. The working-class mother cannot afford to employ a nursemaid to take the child out all day, and is not allowed to keep other children at home to do so. It is only at great sacrifice that she takes a child out for about two or three hours a day, and what a rush of work awaits her return. How can children be kept in first-class condition when they are stunted for want of air, and when the mother is too busy to give them the attention they require and cannot afford good food?

Don’t leave it to the men to improve your lot. You should understand the conditions under which you work better than they. You should know what scheming you have to do to make the week’s money buy what is required of it, just as other sections of workers know their own particular conditions best, the miner, factory worker, etc.

Organise yourselves. Ask yourselves why marriage and children should mean the abandonment of all your leisure and the weary, never-ending work.

Talk the matter over as to whether you cannot alter the existing state of affairs.

Wives and mothers, all women, in fact, you must not think that it is out of your reach to alter the state of affairs under which you live. You have a vote, and therefore a say in the matter as to how you should carry on. You must help to improve conditions along with the menfolk, if not for your own sake, at least for your children’s. You would not like them to struggle along just as you have done. It is not enough and no excuse to say that things will not alter in your lifetime, so why bother to think about it. That has been said too long, and if those who said it in the past had given the matter more serious attention and thought of their children, we would have been nearer getting our desires now. Your husband may be in work now, but you never know for how long. Your children may also have their turn at unemployment, and, as time goes on, the unemployment throng will tend to be greater even than now.

Is it fair to bring children into such an unpromising future without endeavouring to do your share in improving their opportunities ?

We all want to get the best the world can offer. Let me give you an illustration as to how you may obtain your desire in actual fact, and the illustration can be enlarged according to requirements. Suppose a number of women met and came to the conclusion that they could work better together on a large scale at specified work, and instead of each, as at present, being “head cook and bottle washer,” nursemaid, housemaid, kitchen maid, dressmaker and cook rolled into one, they decided to amalgamate and work collectively, with all its possibilities. How much more airy their surroundings could be, and how much less work there need be. It would take much less time in proportion to cook for 100 people collectively than for the same number in a number of houses as at present, to say nothing of present washing day troubles. Among the women carrying out this arrangement, no doubt some would be better at one type of work than another, so that, while some do the cooking, others do the sewing and others give their attention to the children, and perhaps have a change of work in turn. By this method the day’s work could be shortened for all, and if the men must do different work from the women, they could have more comfortable surroundings to return to and a companionable wife, instead of returning home to a small, crowded house or rooms and a harassed drudge, tired of the million and one jobs she has to perform.

If all people worked to produce what all require, and each had a guarantee that they would by that means be sure of getting the necessaries of life, there is no telling how soon the work could be done and what pleasures life could hold out.

Don’t think that it sounds all right, but your next-door neighbour could not be trusted to do things so well as yourself, because no doubt that neighbour is thinking the same of you.

As a general rule, every mother does her best for her offspring, however much they may differ from each other in temperament. It is only the cares of life and the narrowness of it that cause us to mistrust our neighbour. At bottom, we are all bent on getting as much pleasure out of life as we can, and if we can work better collectively, the struggle need not be so hard. Most of us prefer to enjoy ourselves collectively, do we not? You cannot improve matters on your own. Do not isolate yourselves so much, but get together and talk about things with a view to improving your lot.

Your grandmother carried on much as you are doing now. Must your children do likewise ?

Whether your family live by brains and your neighbours by muscle, or vice versa, both work hard, and should be alike as regards having the necessaries of life. If your family consists of various types of workers, surely you do not give one less to eat than another. You give them the best you have.

Why not apply the results of work in the same manner, collectively—each have the best obtainable, each do the best they can?

This is the end which the Socialist Party of Great Britain have in view and are organised to obtain. Not a pittance, but at least a sufficiency for all.

I said you have a vote and should therefore have a say as to how you should live. Why not?

Perhaps in our next issue I will tell you what the vote has to do with your present struggle, and how voting a particular way could relieve you of a harassed life.
Hilda McClatchie
Posted by Imposs1904 at 7:52 PM

Hilda McClatchie was married to Gilbert McClatchie, and was the sister of Adolph Kohn. She was General Secretary of the SPGB for a large part of the First World War when the Party's membership was decimated because of the introduction of conscription, which resulted in many members either 'going underground' or going overseas. She would have been in her mid-twenties at the time.