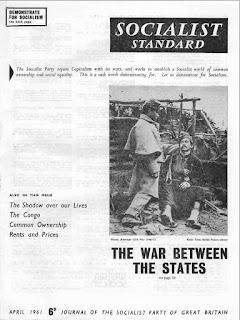 Editorial from the April 1961 issue of the Socialist Standard

It is not to satisfy historical curiosity that we publish in this issue of the Socialist Standard an article which marks the centenary of the outbreak of the American Civil War. The strategy of attrition of that war, and the way in which it organised the resources and population of' the Union into an all-out effort, was a foretaste of the two great wars of the twentieth century. It is hardly too much to say that modern warfare is one hundred years old this month.

Can we say that the bloodshed and misery have been worthwhile? That the world has been improved by the sacrifices which the working class have made during the wars? The bitter fact is that the world is no safer for peace today than it was in 1861. War, actual or potential, is as much a part of our lives as any other aspect of modern society. Although we are at present living in a period of peace, we know that all over the world national powers, great and small, have their bases and their forces in readiness for a future conflict. In Holy Loch, Proteus tends to her missile-carrying submarines. The Soviet Union has developed accurate intercontinental missiles of fearful destructive power.

By any standards of sanity, it is incredible that a society which possesses such enormous productive potential should devote so much of its effort to making weapons of destruction Should we, then, join the campaign to persuade the government to renounce nuclear weapons? That would be to approach the problem from the wrong end. Weapons are not produced to satisfy a government’s destructive impulses. They are produced to prosecute the armed conflicts which in turn are caused by the economic rivalries of capitalism. All of these are inseparable. What it amounts to is that weapons of war are an inevitable product of capitalist society. Those who support capitalism. yet wish that its governments would voluntarily deprive themselves of the most powerful weapons available. are baying for something even more remote than the moon.

Into this category fall the unilateralists. the pacifists and some members of the Labour and similar parties. Some of these accuse the Socialist Party of turning our backs on capitalism’s day to day troubles. It is true that we refuse to be sidetracked from our purpose of Socialist propaganda in order to advocate some reform of capitalism, although during our fifty-odd years of existence we have heard many appeals to do so. Unemployment. Nazi Germany, nuclear weapons these are only some of the issues upon which we have been urged to concentrate our efforts at the expense of our Socialist integrity.

We have rejected these appeals because we know that such problems find their roots in capitalism's property basis To end them, we must establish a Socialist society in which the world’s wealth is owned by the world. Such an objective is the only thing worth demonstrating for.