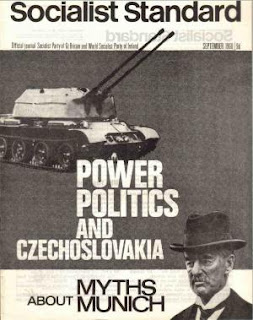 From the September 1968 issue of the Socialist Standard

Coal played a great part in the development of capitalism in Britain. Wood used to be the main fuel but in the 18th century coal mining was stepped up as coal was needed for smelting iron. Many mines were in fact owned by the ironmasters. Coal was also used for steam-raising and, with the expansion of steam driven locomotives, ships and machines, in the second half of the 19th century, production increased from about 50 million tons in 1851 to over 240 million in the first decade of this century. The peak year for the British coal industry was 1913 when 287 million tons were mined, of this nearly 100 million were exported or went into bunkers for ships sailing to overseas ports. In the nineteenth century coal had no serious rival as a source of fuel and power. Coal was and still is used to raise steam for electricity generation and also in the manufacture of town gas.

Because of its importance as a source of fuel and power for modern industry, coalmining was particularly hit by industrial depressions, as our graph shows. It also placed coalminers in a strategic position. The miners played a major role in the development of the working class movement in Britain. Their history was one of continuous struggle against rapacious mine owners, often involving bloody clashes with the military. The first working class MP’s, elected for the capitalist Liberal Party, were miners. The Miners Federation of Great Britain, set up in 1889, was at one time the largest trade union in the world. The General Strike of 1926 was called by the TUC in answer to a lock-out of miners. Although the strike was called off after nine days, the miners heroically held out for nine months before being defeated by hunger. Between the wars, and specially at the beginning of the thirties, almost the whole adult male population of many mining villages was out of work. It is probably fair to say that, as a result of their experiences and of living in their own communities, the miners reached the highest degree of industrial class consciousness of any group of workers in Britain; at least this is true of the South Wales miners. 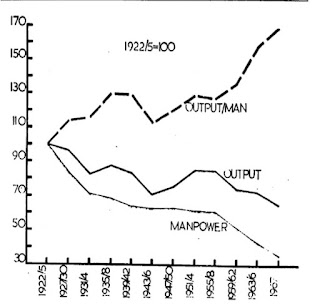 Coalmining was an industry in whose efficiency all capitalists were interested as they wanted the cheapest energy they could get. The old owners were notoriously inefficient so that nationalisation was advocated by many besides the Labour Party and the MFGB. The Tories nationalised the coal before the war, and Labour the mines after. On vesting day, 1 January 1947, every one of the thousand collieries displayed a large notice proclaiming: THIS COLLIERY IS NOW MANAGED BY THE NATIONAL COAL BOARD ON BEHALF OF THE PEOPLE. Many miners thought that this was Socialism or at least a step toward it but it was only state capitalism. The miners remained exploited wage-workers even though nationalisation allowed an improvement in working conditions. There has been no official strike in mining since nationalisation; so-called unofficial strikes have been frequent however. The main union is the National Union of Mineworkers (NUM), as the MFGB became in 1946. The NUM has rivals organising clerks in the Clerical and Administrative Workers Union (CAWU) and various underground supervisors in the National Association of Colliery Overmen, Deputies and Shotfirers (NACODS). Management grades are in the British Association of Colliery Management (BACOM).

For the first ten years of nationalisation the miners never had it so good. They were in a strong bargaining position as the demand for coal far exceeded its supply. Industry wanted every ton that could be produced but it was not until the early fifties that pre-war output and productivity levels were reached. As a useful reminder that even militant unionism is based on sectionalism, it is worth quoting from an agreement reached in 1947 between the NCB and the NUM on the employment of Polish workers. This agreement, after reasonable provisions about any Polish workers being employed on the same terms as everybody else and on union membership, went on:

In the event of redundancy Polish workers shall be the first to go. They shall be transferred or dismissed wherever their continued employment at a particular pit would prevent the continued employment or re-employment of a British mine-worker who is capable of and willing to do the work on which the Polish worker is employed and who might otherwise be displaced by redundancy at that pit or at another pit.

Then, in 1957, the bottom dropped out of the market for coal. The change was dramatic. In its report for 1957 the NCB declared:

Total coal output in 1958 was 215.8 million tons, including 14.3 million tons from opencast working. For the first time, the Board had to take steps to restrict production to meet a decline in demand; the years output was 7.8 million tons less than that of 1957 and was the lowest for eight years.

The following table illustrates the change:

What had happened, then? The table shows that consumption fell drastically in 1957. It had in fact been falling since 1955 and this represented increasing competition from oil. But an event at the end of 1956 hastened the switch to oil. Britain, France and Israel attacked Egypt and the Suez was blocked. Oil supplies from the Middle East could not get through to Europe. The oil companies opened up new sources to meet the shortage so that, when the canal was cleared, they found themselves with a surplus. They brought down their prices and were able to beat coal. Coal production has fallen every year since 1957. It has been the same story in France, Germany and Belgium. Oil use as a proportion of total fuel rose in the period 1957-67 from 15 per cent to over 37 per cent. The government’s Fuel Policy White Paper, published last November, foresees that this trend will continue though oil will be under pressure from natural gas and nuclear energy. By 1970 coal production, they guess, will be down to 155 million tons; still nearly 50 per cent of fuel use in Britain though. Lord Robens has gone further: he says it will be 120 million by 1975 and perhaps only 80 million by 1980. This coupled with increasing mechanisation will mean a huge reduction in manpower. The areas worse hit by the closures are and will be the older coalfields in Scotland, Cumberland, Durham, Northumberland and South Wales. Already there are workers in these areas who have been unemployed for over a year and so are on “supplementary benefit” (the old National Assistance) being subjected, perhaps for the second time in their lives, to a means test. The government has announced fairly generous, by capitalism’s standards, redundancy payments for those who have lost their jobs since July last year—this of course is a reflection of the strength of the workers organised in their unions.

The post-war history of coal-mining in Britain bears out the socialist case: trade union action, though essential, cannot do much more than work with or against market trends. For the first ten years of nationalisation the demand for coal exceeded the supply; for the next ten the position was reversed. All the NUM is doing now, and of course it can do no more, is “retarding the downward movement, but not changing its direction” as Marx put it in another context.
Adam Buick
Posted by Imposs1904 at 8:12 PM