The Philosophy of Anarchism (1942) 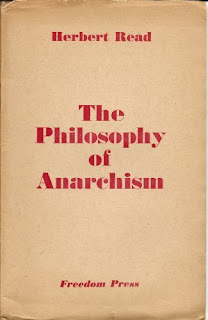 Pamphlet Review from the February 1942 issue of the Socialist Standard

We have been asked by a reader to give our views on a booklet, “The Philosophy of Anarchism,” by Herbert Read, published in 1940 by Freedom Press Distributors (36 pages, 6d.).

To obtain an idea of the general superficiality of the work the reader need not go beyond the two- page introductory chapter. Here in a nutshell Mr. Read displays his failure to understand even the elements of Socialism although his whole case is based on his belief that Socialism has been tried, has failed and must fail. The following extracts from this chapter will suffice to prove the point. Mr. Read writes:


The characteristic political attitude of to-day is not one of positive belief, but of despair. Nobody seriously believes in the social philosophies of the immediate past. There are a few people, but a diminishing number, who still believe that Marxism, as an economic system, offers a coherent alternative to capitalism, and socialism has, indeed, triumphed in one country. But it has not changed the servile nature of human bondage. Man is everywhere still in chains. The motive of his activity remains economic, and. this economic motive inevitably leads to the social inequalities from which he had hoped to escape. In face of this double failure, of capitalism and of socialism, the desperation of the masses has taken shape as fascism—a revolutionary but wholly negative movement which aims at establishing a selfish organisation of power within the general chaos.

We can be quite brief and positive in repudiating Mr. Read’s errors. Marxists have not given way to despair nor is their number decreasing. Socialism has not triumphed in any country. Russia was never Socialist and could not have become Socialist under the Bolshevist regime, no matter what methods the Bolshevists might have used in order to impose their system on the population. Russia was not and is not ripe for Socialism, and the majority of the population were not and are not ready for Socialism. At no time did the S.P.G.B. accept the baseless claim of the Russian that Socialism had been or could be established. Lastly fascism is not and has never been revolutionary. One further proof of Mr. Read’s lack of knowledge of his subject is his use of the term, “State Socialism'” (p. 19)—a contradiction in terms through which he blindly slips into his assumption that State capitalist Russia is Socialist.

So much for Mr. Read’s initial assumption. His “philosophy” and his remedies are of a like nature. He believes (p. 6) that to realise the new world we must prefer the values of freedom and equality above all other values,” and that “thousands, if not millions, of people . . . instinctively hold these ideas”— as if social evolution were a matter of instinct and of moulding society in accordance with a mental attitude of deciding to prefer certain values against others.

He divides the human race into individuals who seek self-expression and those who are servile and want to be shepherded but explains this “fundamental distinction” by saying that the servile ones "are either economically or psychologically predisposed.” He seemingly does not realise that broadly the distinction depends upon an understanding of capitalism and of the way in which Socialism can be achieved. “The only necessity,” he says, “is to discover the true laws of nature and conduct our lives in accordance with them” (p. 16).

Later on Mr. Read admits that his appeal is “to mystical entities, to idealistic notions which all good materialists reject” (p. 20). Notice the absurd position to which his appeal to mysticism has brought him.

His explanation of what he mistakenly believes to be the failure of Socialism in Russia, brings out another of his fundamental beliefs, that society must have a religion. “It is already clear,” he says, “after 20 years of Socialism in Russia, that if you do not provide your society with a new religion, it will gradually revert to the old one” (p. 22).

Incidentally this hardly seems to square with his view that “Communism has of course its religious aspects.”

Socialism will fail, he says, because it is not the “new religion” which will emerge from the ruins of capitalist civilization (p. 27), and “the natural ally of Socialism was the Church ” (p. 24).

On the question of working class action he believes that “the natural weapon of the working classes is the strike.” “The State" he says, "is just as vulnerable as a human being and can be killed by the cutting of a single artery. But you must see that surgeons do not rush in to save the victim. You must work secretly and act swiftly: the event must be catastrophic” (p. 33). He advocates insurrection—“An insurrection is necessary.”

He ends the booklet in much the same frame of mind as those whom he criticises in the opening paragraph—despair. He is not certain whether we are faced with the final "paroxysm of a doomed system, leaving the world darker and more despairing than ever,” or whether we shall have "a spontaneous and universal insurrection." It all depends on whether we achieve "a swift apprehension of the destiny that is upon us” (p. 36).

Though he believes that such qualities as "faith in the fundamental goodness of man" alone can save us his faith seems to have half deserted him, and he is not sure what will happen.

Altogether, a very superficial piece of work. We wonder if even his fellow anarchists feel happy at his exposition of their views.
Edgar Hardcastle