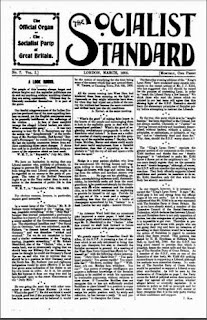 From the March 1905 issue of the Socialist Standard

A lot of people seem to think that making work is a good thing, that capitalists who provide employment are useful people, in fact, that they are so necessary that workmen cannot do without them. It is my purpose in this article to try to show that this is not true.

As it is very difficult to to deal with a community of 40 millions of human beings engaged in thousands of different ways in earning a living, I propose to reduce the community to say 100 men. Now we will suppose that one man owns all the land and another all the machinery, the other men therefore hare nothing, but are able and willing to work. The Landowner says, "Well, my friends, I will give you the opportunity of working on my land, but you must grow rose trees and give me a third of them by way of rent;" the owner of the machinery, tools, etc., says, "Well, my friends, you cannot plough and dig without tools, I will let you use my tools, but you must give me a third of the rose trees you produce by way of interest.”

This is making work, but the biggest dunce can see that such a community would soon be starving, since humanity does not feed on rose trees, so that the mere making of work is not a good thing. Now suppose the Landowner said, "Well, my friends, 50 of you can use my land and grow wheat, fruit and vegetables, and 20 of you can build me a palace to live in and a decent sized house which I can let to the owner of the machinery. etc., and also 98 small cottages and I will pay you in kind;" the owner of the tools says to the remaining 28 men, "If you care to make some good clothes in my factory for me to wear and some to sell to the Landowner and some shoddy clothing for the rest of the community, I will pay you in kind."

In the course of time the palace is finished and the Landowner lives in it; the wheat, fruit and vegetables are reared and the Landowner takes his share, picking out the best, out of which he pays the owner of the factory for his good clothes; the good clothing is made and the owner of the factory is well-dressed and draws his share of the best wheat, fruit and vegetables from the workers who have hired his tools, and out of that share pays the Landowner the rent of his decent house. Net result: the two rich men, without doing a stroke of work, have got the best house, s to live in, the best clothes to wear, and the best wheat, fruit and vegetables to eat, whilst the workers who have produced everything, get the small cottages to live in, the shoddy clothing to wear, and the worst wheat, fruit and vegetables to eat. It seems perfectly clear, therefore, that an injustice has been done to the workers, and that instead of being good men, the Landowner and the owner of the machinery, tools, etc. have robbed the workers of two-thirds of the result of their labour. Let us go a little further. The two owners get such a large store of wheat, fruit and vegetables, which with all their gluttony they have not been able to consume, that it becomes no longer worth their while to allow the workers to grow any more, so they (the workers) are discharged, and seeing that with all their industry, thrift, and frugal living they could not, out of the paltry share of produce allowed them, put by sufficient to live on for many days, it is not long before they are starving, whilst the owners, with all their idleness, waste, and greediness, have enough to last them many months. Poverty has now been born, but in case it might teach the workers a lesson and cause a revolt, the owners offer work off another land to about seventy, some (the biggest) they make policemen to protect their property, some magistrates, to sit in judgment on, and deal out punishment to their brother' workers, who, impelled by the pangs of hunger, help themselves to the produce which they themselves created, but which somehow or other (they don’t exactly know how) has become the property off the Landowner and factory owner.

Having now arrived at our present system of society, with its landowners. Factory Owners, Magistrates, Policemen, etc., it will be clear to you that the number of men engaged in producing food, clothing and shelter has been considerably reduced, and it is just as clear that those who are producing have to produce the same quantity as when more were producing, with the inevitable result, that they have to work longer hours or with greater intensity for the same reward. What a strange thing it is, thatHt has not yet dawned upon the minds of the workers, that it would be more fair for 98 men to rule their own lives and those of the other two, than to allow the other two to rule theirs.

The way to bring about the desired change is very simple, the 98 men must go to the two men and say, “ Friends, the land is a gift of nature to all men, machinery and all the means of production have been brought into existence by the energy and industry of the workers. We purpose, therefore, taking over the land and the means of production and working them in the interest of all and you will then have to contribute your share of the labour which is necessary to provide the sustenance and comfort essential to the well-being of the community.” If this were done it appears to me that, with our increased knowledge of organised production and distribution, the present industrial hell would be converted into a heaven of delight, where peace and plenty would bring joy and happiness to one and alL

Kennett was a member of the Romford Branch of the SPGB.