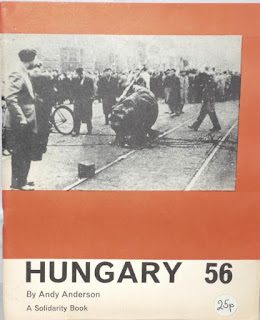 Book Review from the January 1965 issue of the Socialist Standard

Hungary 56 (Solidarity book 3/6) by Andy Anderson is an interesting account and analysis of the Hungarian rising of October-November 1956, written from what is basically an Anarchist point of view.

When the Red Army overran East Europe at the end of the war they had to install some sort of government in the areas concerned; in Rumania, Bulgaria and Hungary all they could use were the remnants of the previous pro-fascist ruling groups. Eventually, through their control of the police force they were able to set up police states, manned by loyal native stooges, similar to their own in Russia. The countries of East Europe were particularly harshly exploited—even by capitalist standards—to rebuild the Russian economy. As time went on the police state regime began to have an effect on economic growth. Attempts to drive the workers too hard merely resulted in increasing inefficiency, absenteeism and even sabotage.

Following the death of Stalin in 1953 the Russian rulers began a new course; a similar process began to take place in other parts of East Europe. Riots in Poland eventually brought the Gomulka regime to power. In Hungary the Stalinists under Rakosi were a little more short-sighted towards a demand, led by the Petoti Circle and the Writers Union, for a more “liberal regime.” The Russians realised that the situation was explosive and Rakosi was removed. A number of former Titoists, including one Janos Kadar were rehabilitated.

The Hungarian uprising actually began on October 23rd when the Secret Police, the A.V.O., fired on a crowd demonstrating outside the radio station. The next day Russian tanks were called in but were forced to retreat. The government now under Imre Nagy, had lost control. Workers Councils, loosely linked together, organised the distribution of food supplies and the resistance to the Russians. On October 26th.. the rebels, published their programme which included demands for the withdrawal of Russian troops, a popular government under Nagy, recognition for the Workers Councils, higher wages, higher pensions, less piecework, higher family allowances, more houses and so on. During the next week the Nagy government tried to regain control by offering concessions. Nagy himself went so far as to call for a neutral Hungary. This was too much for the Russians, who launched a counter-attack on November 4th. Nagy appealed to the U.N. and took refuge in the Yugoslav embassy. A puppet government under Kadar took over. Eventually, with the help of the Red Army, the central government regained control. Resistance continued for many months but the rising had been crushed. Estimates of how many Hungarians were killed vary between 20,000 and 50,000.

What was the significance of this? There is a lot of truth in the saying that revolution is delayed reform. Political power can't hold back economic forces for ever. In East Europe, bureaucratic state capitalist regimes were standing in the way of economic efficiency. A modern capitalist economy cannot for long be run by police state methods; it demands the consent, even if only passive, of the workers. Skilled and educated workers cannot be coerced into working to the best of their ability. Yugoslavia was the first to move away from this system, when decentralisation was begun there in 1950. The rest of East Europe was held up by Stalin's grip. After his death, however, the Russian leaders were able to act on what must have been obvious for some time: that Stalin’s methods were inefficient. With “de-Staiinization” encouraged in Russia, the satellites also were able to adopt a less onerous policy.

In Poland, the change was achieved by opportune reforms and concessions. In Hungary the story was different. The Stalinist government there left the reforms too late and lost control. In circumstances like this, where the established machinery of government breaks down, a substitute appears. In Russia this took the form of the Soviets or Councils. Something similar happened in Italy in 1921 when the workers look over the factories. What these episodes show is that where the capitalist government machine breaks down and the capitalists lose control, the workers don’t simply let anarchy reign, they do their best to organise something themselves. So it was in Hungary.

Anarchists have always made great play of happenings such as these. They did so over the Paris Commune of 1871, which they saw as the beginning of the dissolution of the State into a federation of free communes. The anarchists were against all permanent machinery and the principle of representation. To imagine that the modern productive system can be controlled without a permanent administrative machine is so much Utopian nonsense. Nevertheless such views are encouraged by events like the Hungarian rising. Anderson tells us that this was:

far more than a national uprising or than attempt to change one set of ruler; for another. It was a social revolution in the fullest sense of the term. Its object was a fundamental change in the relations of production, in the relations between ruler and ruled in factories, pits, and on the land.


New organs of struggle were created: the Workers’ Councils. which embodied, in embryo, the new society they were seeking to achieve.

This is going too far. The Hungarian working class were not organised consciously for Socialism.They were organised, certainly, but organised to keep life going and to resist the Russians.

Under capitalism there are many kinds of working class organisations: trade unions, political parties, tenants associations, friendly societies and so on—formed for a variety of different purposes. A working class organisation can only be considered revolutionary when it consciously aims to replace capitalism. The Hungarian Worker,’ Councils do not come into this category. This is not to belittle them; they were examples of what the working class can do in difficult circumstances. The heroic resistance of the Hungarian working class to totalitarian Stalinism will go down in the annals of working class history. There is nothing to be gained from seeing in the Hungarian tragedy something which just wasn’t there; it wasn’t the beginning of a social revolution.
Adam Buick