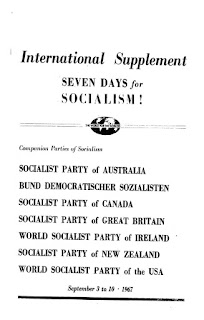 From the Seven Days for Socialism! International Supplement (August 1967)

To describe the position in Australia, one could truthfully say, as could be said of most capitalist countries. Socialism is just as near or as far off as the industrial development and the political understanding of the working class will allow it to be.

Not withstanding the promises of the “emancipators” of the last 150 years, there has been no “hot-house” growth of socialist ideas—any more than there have been further developments in Labour or Liberal ideas.

The one great difference is that while the Liberal, Labour, Communist and other parties have chopped and changed—and even stolen each other’s programmes from time to time—without basically improving working class conditions, the Socialist Party has propagated principles based on an understanding of the Socialist teachings of Marx, Engels and others who not only interpreted the world differently but showed the working class how to change it.

To many, these words may sound stale and outmoded (we are often twitted by our opponents on the score of “not being with it politically”) but the basic conditions of capitalism remain the same in Australia as elsewhere. However much the pedlars of vote-catching political slogans and election gimmicks try, they do not improve working class understanding of Socialism by their confusing jargon.

In the so-called affluent society of today, emphasis has been stressed on the comparatively long periods of almost full employment. But in Australia this so-called affluence is marked by many workers having to do two—or even more—jobs, while many wives are working with the children helping occasionally.

And even with these multiple incomes many of their purchases are ‘hire purchase’ with millions owing, much of which will never be paid. Where mum, dad and the kids have to work to obtain sufficient to try and cover the costs involved in the ‘ersatz’ affluence, there is not much of what our masters used to call ‘family life’.

With minds filled with capitalist ideas and bodies geared to the grind of capitalist economy, work is now all that matters to most people; and the fact that they ‘live to work’ rather than work in order to live is soothed by pills, powders and pop singers.

The greater the acceptance of the status quo, the more stagnant the growth of Socialism appears to be. Still, there is always a questioning of the value of the existing political parties and the industrial organisations.

From a country once renowned for its ‘militant’ trade unionism, Australia has now reached a point where the ‘fighting’ ability of the trade union movement is gauged by the amount of money they spend on futile appeals to arbitration courts in an endeavour to retain a basic wage that doesn’t even cover the minimum requirements of the family unit for which it was originally designed.

‘Militant’ seamen, wharf labourers, miners and others who once vigorously eschewed any idea of “carting their grievances to capitalist courts” now seek economic salvation in professional, academic advocates of the Australian Council of Trade Unions.

The ACTU, dubbed by the militants from its inception as “the Graveyard of Industrial Disputes”, like its counterpart in Britain the TUC willingly accepts the working man’s burdens while shepherding its deluded followers into supporting its political reflection — the Australian Labour Party, and the leaders monotonously desert to the political ranks to spread deception still further.

This, of course, is not confined to Australia. Socialists in all countries are faced with similar ‘intellectual’ opposition, our opponents adorning themselves with attractive political labels in order to suborn unsuspecting workers from socialist parties. The dissemination of socialist knowledge will help workers detect the political fakirs.

Capitalism has provided another subject for a ‘hands off’ slogan — the ‘aggressors’ are on the rampage in the Middle East and by the time it is discovered who the ‘aggressors’ are, thousands of workers’ lives will have been buried in the sands on both sides of the Suez.

And while workers lay down their lives for lands they do not own we have to listen to the leaders of the various political parties telling us that “We must defend ‘our Country’.” The fact that such things can happen is an indication of the need for a better understanding of social and political events. This understanding can come only by the spread of socialist knowledge and it is here where the socialist enters the scene.

When the workers understand the need for socialism they can work for its achievement; while they submit to capitalism they will have to fight to defend it.

Hence the pressing need for the dissemination of socialist ideas. It is a long and difficult task but the reward--“The World for the Workers”—is well worth it!

The Seven Days for Socialism! International Supplement was sent out with the August 1967 issue of the Socialist Standard.