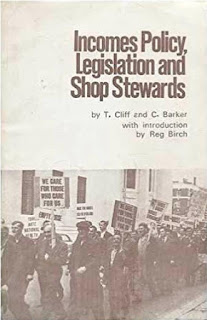 Book Review from the August 1966 issue of the Socialist Standard

The authors' purpose in this book is to explain why an incomes policy exists, why the workers should oppose it and why the shop stewards are the key to the achievement of "Socialism". But, as will be shown, they are not really aiming at Socialism and their belief in the Shop Steward Movement is built on faulty observation of the conditions of capitalism and on failure to distinguish between "militancy" and Socialist understanding. Above all they do not face up to the fact that the act of revolutionising the social system requires control of the machinery of government by a Socialist working-class. They attack the political and industrial leaders of the workers but not the idea of leadership: what they want is different leaders. They are not consistent in this and in some places they appear to be arguing for self-reliant action by the workers and not "leave it to their leaders", but elsewhere we are told that the shop stewards are the "natural leaders".

The particular target of their attack is full-time trade union officials because these officials do not support the shop stewards and unofficial strikes—"the majority of the union bureaucrats cannot be depended on any more".

The authors argue that the shop stewards and factory committees are the militants, held in check by the national executives but they have overlooked the reasons why unions have full-time officials and the conditions in which factory floor militancy vanishes.

In the early days unions had to fight to secure that the union officials could get recognition to negotiate with the employers, who much preferred to deal direct with the workers in their employ. It was to prevent sacking and victimisation of workers on the factory floor that unions demanded the recognition of the union official who could not be directly intimidated.

Cliff and Barker argue from post-war British history that it is the shop stewards and factory committees which are most active; but they have failed to draw the right conclusions from the almost complete destruction of the shop steward movement after the first World War, although they report it:

By about 1920, with a rise in unemployment and an enormous offensive against the working class from the employers, the shop steward movement that had been born during the war was as good as wiped out.

When unemployment is heavy the shop stewards and factory committees are most vulnerable: faced with the sack they have no choice but to become passive, or, as has happened, become the instruments of the employers. Guillebaud, in his The Works Council (Cambridge University Press 1929) showed how, in Germany, although the works councils were set up by law and flourished when unemployment was low, they collapsed when unemployment became heavy in 1923. Then it was the National unions which alone could offer some protection of the workers and of the works councils themselves.

Extravagant claims are made for the shop steward movement in this book. They are given the credit for the big increase in the number of strikes in the years 1959 to 1965 and they are said to give us "the possibility of the rebirth of a revolutionary working class movement".

It is true that the number of strikes, except in mining, has increased (but why leave out the strikes in the mining industry which have fallen heavily?). But the authors should look further before drawing conclusions. If they took account of the numbers of trade unionists they might have to conclude that, measured by the numbers of strikes, the workers were more "militant" at the end of the 19th Century. But it is in any event a shallow view. Many factors influence the number of strikes—a sharp rise in prices for example and prices have been rising faster since 1960, after which most of the increase in the number of strikes has taken place. Attempts by employers to introduce new working conditions (shifts for example) may also be a factor.

And the authors should also take a look at the results of the strikes. After taking into account the effect of rising, prices, average hourly earnings have been rising by a smaller percentage as the number of strikes has increased.

And they forget that in favourable conditions unions can sometimes gel results by threatening to strike but not needing to do so.

It is when they write about "revolutionary aims" and socialism that Cliff and Barker are most confused and obscure. They claim to want socialism but tell us that the greatest problems facing the workers at the present time are incomes policy and trade union legislation. Why isn't the achievement of Socialism the greatest problem?

They talk of the "rebirth of a revolutionary working class movement", but why "rebirth"? When was the British working-class organised in a revolutionary movement for Socialism?

And why should the shop stewards' movement have any such consequence? They admit the obvious fact that the factory floor struggles are "essentially private fights, particular to workers in one shop or one factory".

They mention that one activity which strengthens the hands of the shop stewards is that they maintain control over the distribution of overtime!

How do these narrow struggles give birth to Socialist understanding?

They attack George Brown's plan because it envisages a relative decline in nationalised industry and ask "What about good old Clause Four?"

Clause Four is the clause in the Labour Party constitution which commits them to mass nationalisation or state capitalism. So what, from the Socialist standpoint, is there "good" about Clause Four.?

Cliff and Barker also note that the government is "by no means the best employer", so why do they want more nationalisation?

Reg Birch, who writes the Preface, likes the rest of the book but not the talk about the increase in the number of shop stewards automatically leading "the development of a Socialist movement"; but he is equally coy about the name and object of the political party of his choice.

After all, the three of them agree in holding up the Shop Steward's Movement as the movement of revolutionary promise. So why can't they tell us about the new society they seek? Is it really Socialism or only Clause Four capitalism that they are after?

And as the authors urge the workers not to take a "deep interest in parliament" what is their political party going to do?

It would be interesting to know what the three of them were doing at the last General Election. Were they urging the workers to vote only for Socialism? Or were they supporting one or other of the parties of capitalism, the Labour Party and Communist Party for example?
Edgar Hardcastle

Tony Cliff and Colin Barker were leading members of the International Socialists - in fact, Cliff was head honcho of both the IS and the succeeding SWP until his death - whereas Reg Birch was a leading CPer in the Engineering Union. A couple of years after this, Birch was the leading member of a Maoist split from the CPGB.