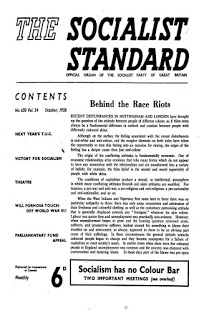 From the October 1958 issue of the Socialist Standard

Recent disturbances in Nottingham and London have brought up the question of the attitude between people of different colour; as if there must always be a fundamental difference in outlook and conduct between people with differently coloured skins.

Although on the surface the feeling associated with the recent disturbances is anti-white and anti-colour, and the rougher elements on both sides have taken the opportunity to turn this feeling into an occasion for rioting, the origin of the feeling has a deeper cause than just anti-colour.

The origin of the conflicting attitudes is fundamentally economic. Out of economic relationships arise emotions that take many forms which do not appear to have any connection with the relationships and are transformed into a variety of beliefs; for example, the false belief in the mental and moral superiority of people with white skins.

The conditions of capitalism produce a mental, or intellectual, atmosphere in which many conflicting attitudes flourish and older attitudes are modified. For instance, a pro-war and anti-war, a pro-religious and anti-religious, a pro-nationalist and anti-nationalist, and so on.

When the West Indians and Nigerians first came here in force there was no particular antipathy to them: there was only some amusement and admiration of their liveliness and colourful clothing, as well as the customary patronising attitude that is generally displayed towards any “foreigner,” whatever his skin colour. Labour was scarce then and unemployment was practically non-existent. However, when unemployment began to grow and the housing question remained acute, sufferers, and prospective sufferers, looked around for something to blame their troubles on and newcomers, as always, appeared to them to be an obvious part cause of their sufferings. In these circumstances the general attitude towards coloured people began to change and they became scapegoats for a failure of capitalism to meet society’s needs. In earlier times when there were few coloured people in England unemployment was common and the country was cluttered with overcrowded and festering slums. In those days part of the blame was put upon the Irish, or the Jews, or “foreigners” with white skins. Once this kind of idea is set going it becomes enlarged and transformed into many kinds of absurd views that are finally accepted and taken for granted by otherwise intelligent and reasonable people.

An illustration in another field furnishes an example of how outlooks that have a source in social conditions can suffer transformation.

The economic rivalries of sections of the capitalist class brought about the last two great wars. They had a purely economic origin. Yet patriotic feeling and feelings concerning democracy and justice became so emotionally stirred up that, on both sides of the conflict, wealthy young men from the ranks of the capitalist class were prepared to lay down their lives in the struggle in a fervour of blind idealism.

West Indians came to England because times were bad in their home country and they thought they could do better here. On the same ground thousands emigrate from England to the United States or the Dominions because they think they can make a better living there. In England working conditions were easier than the emigrants met in places like Canada and the emigrant took time to acclimatise himself to the faster pace and other conditions. Consequently, he was not at first made very welcome and employers were inclined to think him lazy. But they had to put up with him whilst labour was scarce. Similarly, the West Indian, who has been accustomed to a slower labouring speed, is not now as welcome on the job as he was when there were more jobs than job-seekers. But in time all workers become integrated with the conditions of the country in which they settle.

When workers are struggling for homes and jobs anything that appears to stand in their way becomes a menace to be got rid of, particularly when they see coloured people overflowing with life and expressing it in late and noisy hours. Consequently, the unusual influx of people from overseas was bound eventually to appear in the light of a menace, notwithstanding the fact that about 100,000 emigrants have left this country annually since the war and only a total of 200,000 coloured people have settled here during that time. (See Evening Standard, 10th September, 1958.)

Mr. Norman Manley, Chief Minister of Jamaica, has come over here to try to smooth out the difficulties that have arisen. He has made impassioned speeches, urging England “to preserve her reputation for being able to maintain in England absolutely decent inter-racial relationships.” (Evening Standard, 10th September.) He has good reason for his passion. He got rid of a portion of his unemployed problem by the emigration of Jamaicans, and he doesn't want them back on his doorstep again.

It is worth mentioning another objection that has been urged, one concerning sex relationship. Many people are disturbed at seeing coloured men associating with white women. They base their antipathy on moral grounds, though the moral grounds do not appear to be so strong when white men associate with coloured women. The coloured man is at a disadvantage here because he is so easily distinguished, whereas his white brother associating in the same way with a white woman would generally pass unnoticed. However, on whatever grounds the arguments are based, the association has nothing to do with colour. It is still true that some white men, both at home and abroad, are pursuers of women of any colour. One has only to remember the antipathy here to American soldiers during the war on account of the sex question. Further, it should be remembered that white soldiers who brought home Malayan, Chinese or Japanese wives incurred no odium, in spite of the differences in colour.

Now let us glance at another aspect of the subject.

Amongst white people belonging to the same country there has been bitter, and bloody, antagonism, as instanced by the civil wars in England, the United States, Germany, France, Russia, and Ireland. This, apart from the wars between European nations. But amongst coloured people there has been similar strife: the massacres in the struggle between India and Pakistan; the antagonism between the people of Northern and Southern Nigeria, the recent strife in Ceylon between the Tamils and Sinhalese. No sooner was the new State of Ghana established than some of its coloured citizens were expelled. In South Africa and Kenya there is bitter antagonism between the Indians and black people. Again, there is everywhere oppression of poor coloured by rich coloured, just as there is oppression of poor whites by rich whites.

We may also note in passing that there are “wide boys” among the coloured just as there are among the white. One example will illustrate this. It is taken from a letter by a “London Landlady” that appeared in the “Manchester Guardian” for the 13th September. The landlady in question had been in the habit of letting her rooms to African, Indian, Chinese and European students and now and then had a bad tenant, which did not trouble her until she ran into the following difficulties:—

"The trouble really started when I had to remind a certain African tenant that he was in arrears with his rent. This immediately drew the comment that I was discriminating against him—quite illogical in the circumstances. From then on both he and another African tenant consistently refused to pay their rent until it was considerably overdue. Occasionally one of them would go away and I would find a strange African in his room—and again, when I mentioned this I was accused of colour prejudice.”

Another side of the question concerns accommodation. The fact that many landlords are reluctant to let accommodation to coloured people is not, in itself, an example of colour discrimination. Landlords are in business to make money and therefore wish to let their houses and flats as profitably as possible, no matter who desires the accommodation. Consequently they steer clear of impecunious, quarrelsome, drunken tenants; tenants who are disturbing others by frequent parties, or tenants who bring others in to overload the premises. They avoid these people because they are liable to drive others away and lower the letting value of the premises. Many of them are convinced that this would happen if they let to coloured people. The latter are lively, sociable and inclined to be noisy because they come from a part of the world where liveliness is common. Also, owing to the housing shortage, as they must find somewhere to live, they are inclined to crowd together in the only places available and put up with the discomfort.

Finally, we, of course, deplore attacks of workers on each other, regardless of the colour of their skins.

The root of the present problem is therefore not colour, but social conditions that are produced by capitalist society. Various solutions to the problem have been put forward, but these solutions ignore the root from which the problem grows. Present racial antagonism is bound up with the general conditions of capitalism. Like the other evils of capitalism it will only disappear when capitalism itself has been replaced by a social system in which all human beings will be able to move freely over the earth and live in harmony because their interests will be identical. This can only be a reality under Socialism.
Gilmac.
Posted by Imposs1904 at 9:38 AM