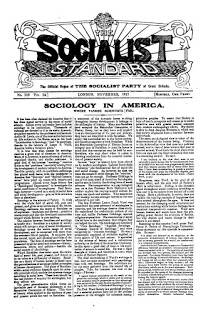 The topic of the hour, in the tube, tram, cookshop, four-ale bar and at the workshop bench, is “Reprisals.” For the moment the real issues of this colossal tragedy are put upon one side, and one hears from the lips of jaded workers who have never known what “Peace” really is, such catch phrases as are current in the Press and also the ludicrous ejaculations that are reported as being uttered by the Godhead of the British Empire—Mr. George (the Commoner not the King—namely: “Give them a dose of their own medicine! ” “Give them Hell! ” “Bomb German women and children!” and other equally nauseous expressions indicative of the state of mind of the world’s peoples in this, the twentieth century of “Christian civilization.”

It is not necessary to discuss whether air raids on Southern Germany will prove an efficacious preventive of air raids on England, though, of course, thinking workers who know the cold-blooded contempt in which our masters hold us, will realise that they do not consider the lives of working-class women and babies at all, but desire only to damage the German master-class property in return for the damage done to their own here. As General Smuts stated: “London is the nerve centre of the British Empire,” and the axle on which turns the wheel of Armageddon, which the Germans will continue to attack, regardless of the fact that Allied airmen are bombing German towns. Thus members of the working dam unfortunate enough to be dwelling in the danger zone need not be grateful to their masters for blowing to pieces German women and children, also of tbs working class, but should rather bestir themselves to think about the present state of affairs.

Gothas may come over and bomb Shoreditch and the Allied aeroplanes may fly over the next night and bomb Baden; Caprionia may bomb Pola and the Austrians in return may bomb Venice; raids and their consequent reprisals may be the next phase in the war, but why, oh why, should the working class think they have any cause for satisfaction ? Does the murdered Shoreditch baby revive and live anew when a Baden baby is slaughtered? Will the babies of Pols rise refreshed and sing the National Hymn of Austria on learning of the fate of the Venetian babies ? No! All that will result will be that workers, as they always suffer, from the ghastly effects of a rotten social system; and that the capitalist class in their fight for commercial supremacy, one section over the other, will go on shedding blood other than their own, until their objects are attained.

What reck they so long as their Argosies reach new-won markets, even if the seas upon which they ride are of human blood? No! friends of the working class, “Reprisals” are not measures to safeguard your lives: yon are too cheap to be worth that trouble.

But apart from Reprisals, the present war, as I have stated, is entering upon a new phase. The Press calls it the “Air offensive". It is a phase that is fraught with solemn bodings to the workers of the world. The science of warfare has progressed in astonishing leaps and bounds. The Zeppelin, the most effective air weapon in the earlier stages of the war, is already spoken of as out of date and innocuous. New inventions of lethal intent have crowded across the stage of war in a progressive stream; new explosives, new guns, new gases; tanks, U boats, Gothas, '75s and a host of others that make one shudder to think of what the war of the future will be like.

That is the question for the working class to consider. The capitalist system has culminated in this state of affairs, when it is death to look out of one's door at the moon; when chaste women and prostitutes shelter together in cellars, and parsons rub shoulders with honest men in underground places.

But the science of warfare will not stop there. The international capitalist gang will be always squabbling and coveting the world's markets, so long as they remain in control of the world's wealth. And wars will come and go, each one more terrible than the last.

Think then, comrades of the international proletariat, of the heritage you are leaving to posterity, of the death that falls from the skies, strikes from below the surface of the seas, and creeps over the landscape in a cloud of gas. It is not for you to shriek for reprisals on yourselves, but to act, at once, on class-conscious lines, organise for Socialism and overthrow for ever the tyrant that stands with his foot on your neck pressing you down into the bloody mire. Don't worry yourself as to whether that foot wears a jack-boot or a patent leather one, but arise and fling it off. Join with our comrades of all lands in building a new world above the ruins of the old, a world where national boundaries shall be unknown and wars be things of the past.