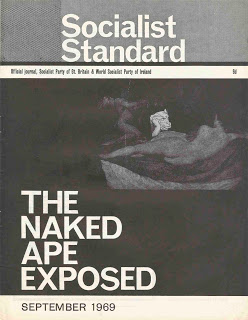 From the September 1969 issue of the Socialist Standard

Marx and Engels, as anyone who has read their writings knows, used the terms ‘socialism’ and ‘communism’ interchangeably to describe what they stood for. They did not think of them as separate systems of society but merely as different names for a system based on the social or common ownership of the means of production. Why they used one and then the other was explained quite clearly by Engels in one of the prefaces he wrote to the Communist Manifesto. Nevertheless the myth still persists that Socialism and Communism are not just different names for the same system of society.

Most of the common distortions of Marxism can be traced back to Lenin, and this one is no exception. Until 1917 Lenin and the Bolsheviks regarded themselves as Social Democrats and called the stage in social evolution that would follow capitalism — a wageless, moneyless, stateless society based on common ownership — Socialism. If pressed they would have agreed that another, if somewhat dated, name for this society would be Communism.

The support given by the rest of Social Democracy to the first world war came as a shock to Lenin and led him to decide that a complete break with them must be made. On returning to Russia in April 1917 he suggested that the Bolsheviks change their name to ‘Communist Party’, and that they prepare to seize power for Socialism in the immediate future.

In the course of explaining his proposal to change the party’s name Lenin advanced a curious argument. Our aim, he wrote, was not just Socialism but eventually Communism also:

From capitalism mankind can pass directly only to socialism, i.e., to the social ownership of the means of production and distribution according to the amount of work performed by each individual. Our Party looks farther ahead: socialism is bound to pass gradually into communism, upon the banner of which is inscribed the motto: From each according to his ability, to each according to his needs (Selected Works, Vol. 6).

This was the first hint that Lenin saw any distinction between the meanings of the two words, but this theme was to be developed in more detail in his abusive, dishonest, and confused pamphlet The State and Revolution, written: in August and September of the same year.

However, the part of his April Theses, as they were called, which attracted the attention was not this but his call for the Bolsheviks to get ready to seize power and establish Socialism. Until then the immediate political aim of the Bolsheviks had been the establishment of a democratic republic in Russia, not Socialism. Like the more orthodox Social Democrats, the Mensheviks, they had accepted that, on any understanding of Marx’s theory of social evolution, Russia was not ripe for Socialism.

This sudden about-turn did not go without comment from Lenin’s opponents. “In aiming at power for Socialism now”, they told him, “you are abandoning Marxism; anybody can see that the economic conditions for the establishment of a socialist society do not yet exist in Russia”. Lenin’s reply was ingenious but typically dishonest. “You are talking about Communism”, he told his critics, “but we have never said we were going to introduce that; our immediate aim is only Socialism”. Till then, however, nobody else who called himself a Marxist had been aware of any difference between Communism and Socialism. Lenin’s reply, in which he redefines Socialism so as to be able to call the Bolsheviks’ immediate programme ‘socialist’, reads:

Actually, when a learned professor and following him the philistine, and following him Messrs the Tseretelis and Chernovs, talk of unreasonable utopias, of the demagogic promises of the Bolsheviks, of the impossibility of ‘introducing’ socialism, it is the higher stage or phase of communism they have in mind, which no one has ever promised or ever thought to ‘introduce’, because it generally cannot be ‘introduced’ (The State and Revolution).

Without batting an eyelid at his trickery Lenin went on: “and this brings us to the question of the scientific difference between socialism and communism . . .”! How Lenin got away with this is difficult to understand, especially since in the earlier part of his pamphlet he himself falls into his old habit of using ‘socialism’ when, according to his own distortion, he should have used ‘communism’.

Three phases
Let us now have a look at Marx’s views on this question since this will expose Lenin’s twisting better. Marx held that capitalism paved the way for a classless society based on common ownership which, as we saw, he and Engels called either communist or socialist. Marx also held that this new society could only be set up by the political action of the working class. The period between the winning of political power and the final establishment of common ownership (or Socialism) Marx sometimes called “the dictatorship of the proletariat”, because during it state power (dictatorship, which had not yet come to have its modern meaning) would be used by the working class (proletariat). During this period the workers would be using the state to transform society from capitalism to Socialism by taking various measures, depending on the circumstances of the time, aimed at abolishing private property in the means of production. This done, Socialism had been established and the need for a coercive state machine gone. Marx also suggested that in the early stages of Socialism there would have to be some restriction on the amount of wealth people could take from the common store. Eventually, however, when the means of production had been sufficiently developed, Socialism could go over to the principle: from each according to his ability, to each according to his needs.

Thus, for Marx there were three different circumstances:


We must add here that further political and economic developments since Marx’s day e.g.—and we give a fairly full list so you can get some idea how far-reaching these have been — universal suffrage, political democracy, continuing centralisation and concentration of industry, vast technical advances like the development of electricity, the motor vehicle, aviation, radio and TV, plastics, computers, automation, nuclear energy, and space travel have, in our view, meant that Marx’s political transition and his early stage of Socialism can be passed through very quickly.

Marx’s first stage of Socialism was still Socialism. The political transition period from capitalism was over so that class property, the state machine, money, buying and selling, wages, and profits had already disappeared. The basis of society was the common ownership and democratic control of the means of life and the aim of production was solely to meet human needs. Only, for a time until plenty for all could be produced, there would have to be some democratic social control over the amount of wealth individuals took from the common store in order to ensure that the temporarily limited supplies were shared fairly. This, and only this, was the difference between Marx’s first and higher phases of Socialism/Communism.

Lenin’s so-called Socialism (which was supposed just to be another name for Marx’s “first phase of communist society”) was radically different from this. For under it, Lenin explained, the state would still exist:

All citizens are transformed here into hired employees of the state, which consists of the armed workers. All citizens become employees and workers of a single nationwide ‘syndicate’. All that is required is that they should work equally, do their proper share of work, and get equally paid (The State and Revolution).

Lenin’s trick should now be obvious. He has deliberately confused Marx’s political transition period and his early stage of Socialism, trying to make out that they were one and the same. Only thus can he reach the absurd conclusion that in Socialism there would still be a coercive state and still be employees getting wages. What Lenin was advocating the Bolsheviks should introduce in Russia in 1917 was actually a form of state capitalism, though ironically this phrase too was to cause him trouble later when he made state capitalism yet another stage in the supposed transition from capitalism to Communism!

Once you realise that Lenin was not a Marxist and that the Russian social system is state capitalism then there is no difficulty in recognising, along with Marx and Engels, that Socialism and Communism are just two alternative ways of referring to a society based on common ownership.
Adam Buick
Posted by Imposs1904 at 11:39 PM