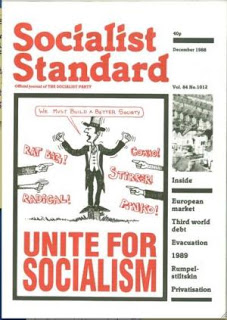 1. What is the Socialist Party of Great Britain?
It is a political party, separate from all others, Left, Right or Centre. It stands for the sole aim of establishing a world social system based upon human need instead of private or state profit. The Object and Declaration of Principles printed in this introductory leaflet were adopted by the Socialist Party in 1904 and have been maintained without compromise since then. In other countries there are companion parties sharing the same object and principles, and they too remain independent from all other political parties.

2. What is capitalism?
Capitalism is the social system which now exists in all countries of the world. Under this system, the means of production and distribution (land, factories, offices, transport, media, etc.) are monopolised by a minority, the capitalist class. All wealth is produced by us, the majority working class, who sell our mental and physical energies to the capitalists in return for a price called a wage or salary. The object of wealth production is to create goods and services which can be sold on the market at a profit. Not only do the capitalists live off the profits they obtain from exploiting the working class, but, as a class, they go on accumulating wealth extracted from each generation of workers.

3. Can capitalism be reformed in our interests?
No: as long as capitalism exists, profits will come before needs. Some reforms are welcomed by some workers, but no reform can abolish the fundamental contradiction between profit and need which is built into the present system. No matter whether promises to make capitalism run in the interests of the workers are made sincerely or by opportunist politicians they are bound to fail, for such a promise is like offering to run the slaughter house in the interests of the cattle.

4. Is nationalisation an alternative to capitalism?
No: nationalised industries simply mean that workers are exploited by the state, acting on behalf of the capitalists of one country, rather than by an individual capitalist or company. The workers in nationalised British Leyland are no less the servants of profit than workers in privately-owned Ford. The mines no more belong to "the public" or the miners now than they did before 1947 when they were nationalised. Nationalisation is state capitalism.

5. Are there any “socialist countries”?
No: the so-called socialist countries are systems of state capitalism. In Russia and its empire, in China, Cuba, Albania, Yugoslavia and the other countries which call themselves socialist, social power is monopolised by privileged Party bureaucrats. The features of capitalism, as outlined above, are all present. An examination of international commerce shows that the bogus socialist states are part of the world capitalist market and cannot detach themselves from the requirements of profit.

6. What Is the meaning of socialism?
Socialism does not yet exist. When it is established it must be on a worldwide basis, as an alternative to the outdated system of world capitalism. In a socialist society there will be common ownership and democratic control of the earth by its inhabitants. No minority class will be in a position to dictate to the majority that production must be geared to profit. There will be no owners: everything will belong to everyone. Production will be solely for use, not for sale. The only questions society will need to ask about wealth production will be: what do people require, and can the needs be met? These questions will be answered on the basis of the resources available to meet such needs. Then, unlike now, modern technology and communications will be able to be used to their fullest extent. The basic socialist principle will be that people give according to their abilities and take according to their self- defined needs. Work will be on the basis of voluntary co-operation: the coercion of wage and salary work will be abolished. There will be no buying or selling and money will not be necessary, in a society of common ownership and free access. For the first time ever the people of the world will have common possession of the planet earth.

7. How will socialism solve the problems of society?
Capitalism, with its constant drive to serve profit before need, throws up an endless stream of problems. Most workers in Britain feel insecure about their future; almost one in four families with children living below the official government poverty line; many old people live in dangerously cold conditions each winter and thousands die; millions of our fellow men and women are dying of starvation — tens of thousands of them each day. A society based on production for use will end those problems because the priority of socialist society will be the fullest possible satisfaction of needs. At the moment food is destroyed and farmers are subsidised not to produce more: yet many millions are malnourished. At the moment hospital queues are growing longer and people are dying of curable illnesses; yet it is not "economically viable" to provide decent health treatment for all. In a socialist society nothing short of the best will be good enough for any human being.

8. What about human nature?
Human behaviour is not fixed, but determined by the kind of society people are conditioned to live in. The capitalist jungle produces vicious, competitive ways of thinking and acting. But we humans are able to adapt our behaviour and there is no reason why our rational desire for comfort and human welfare should not allow us to co-operate. Even under capitalism people often obtain pleasure from doing a good turn for others; few people enjoy participating in the "civilised" warfare of the daily rat-race. Think how much better it would be if society was based on co-operation.

9. Are socialists democrats?
Yes: the Socialist Party has no leaders. It is a democratic organisation controlled by its members. It understands that Socialism can only be established by a conscious majority of workers — that workers must liberate themselves and will not be liberated by leaders or parties. Socialism will not be brought about by a dedicated minority "smashing the state", as some left-wingers would have it. Nor do the activities of paid, professional politicians have anything to do with Socialism — the experience of seven Labour governments has shown this. Once a majority of the working class understand and want Socialism, they will take the necessary step to organise consciously for the democratic conquest of political power. There will be no Socialism without a socialist majority.

10. What is the next step?
Many workers know that there is something wrong and want to change society. Some join reform groups in the hope that capitalism can be patched up, but such efforts are futile because you cannot run a system of class exploitation in the interests of the exploited majority. People who fear a nuclear war may join CND. but as long as nation states exist, economic rivalry means that the world will never be safe from the threat of war. There are countless dedicated campaigns and good causes which many sincere people are caught up in, but there is only one solution to the problems of capitalism and that is to get rid of it, and establish Socialism. Before we can do that we need socialists; winning workers to that cause requires knowledge, principles and an enthusiasm for change. These qualities can be developed by anyone — and are essential for anyone who is serious about changing society. Capitalism in the 1980s is still a system of waste, deprivation and frightening insecurity. You owe it to yourself to find out about the one movement which stands for the alternative.


If you have read this set of principles and agree with some or all of them, contact the Socialist Party with your questions and ideas about what you can do to help speed the progress towards Socialism.
Posted by Imposs1904 at 12:15 PM

Email ThisBlogThis!Share to TwitterShare to FacebookShare to Pinterest
Labels: December 1988, Introduction to Socialism, R1988, SPGB Leaflets, What is Socialism?

Nope, you are not imagining things. You have seen this introductory article before. It was recently posted on the blog from the August 1987 issue of the Socialist Standard.

If I am committing myself to digitizing the Standard, then, occasionally, there will be the occasional duplicate. Bear with me.