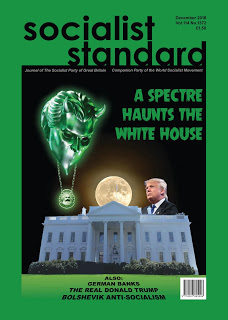 ‘Francis Fukuyama interview: ‘Socialism ought to come back’ was the perhaps surprising title of an article in the New Statesman (17 October). Could the man who notoriously proclaimed that the ‘end of history’ was a liberal market economy with liberal political institutions have really said that? Not in so many words. Asked by George Eaton, the editor, for his view of ‘the resurgence of the socialist left in the UK and the US’, Fukuyama replied reasonably that ‘it all depends on what you mean by socialism.’ If you mean ‘ownership of the means of production,’ he said, ‘I don’t think that’s going to work.’ And went on:


‘If you mean redistributive programmes that try to redress this big imbalance in both incomes and wealth that has emerged then, yes, I think not only can it come back, it ought to come back.’

But that is not what socialism means. Socialism is the common ownership and democratic control of the means of production and involves the abolition of production for the market in favour of production directly to satisfy people’s needs.

What Fukuyama was endorsing was the old Left programme to redistribute income and wealth from the rich to the non-rich. This is rather at variance with what he wrote in 1992 in The End of History and the Last Man where, comparing it with planning to develop capitalism by states in East Asia, he wrote:


‘The Left’s preferred kind of planning, with its intervention on behalf of the victims of capitalism, has historically had much more ambiguous economic results’(chapter 9).

Indeed it has and there is no reason to think that this will change. Increasing the consumption of ‘the victims of capitalism’ does not work in the end because it goes against the logic of capitalism which requires that priority be given to profit-making. Hence its ‘ambiguous’ economic result. In this instance the Fukuyama of 1992 had a better understanding than the Fukuyama of 2018. The fact is capitalism can never be made to work in the interest of its victims, the majority class of wage and salary workers.

In the interview Fukuyama also had something to say about Marx:


‘At this juncture, it seems to me that certain things Karl Marx said are turning out to be true. He talked about the crisis of overproduction … that workers would be impoverished and there would be insufficient demand.’

While Marx did speak of crises of overproduction he did not think that they were caused by insufficient paying demand from workers. He pointed out that, on the contrary, ‘crises are always prepared by a period in which wages generally rise, and the working class actually does receive a greater share of the annual production destined for consumption’ (Capital, Volume 2, chapter 20, section 4). For him, crises of overproduction arose from the anarchy of production built into capitalism that led some businesses, in their competitive pursuit of profits, producing more than the market demand for their products and to this having a knock-on effect on the rest of the economy.

Even in his 1992 book Fukuyama was not that hostile to Marx since he saw him as a fellow Hegelian who held that history moved towards an ‘end’ (in the sense of an aim rather than a stop). His criticism of Marx was that the end of history was capitalism not communism.

In the interview he also referred to ‘China’s state capitalist model’ but that’s par for the course these days.
Posted by Imposs1904 at 12:36 AM