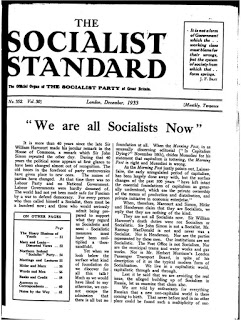 Editorial from the December 1933 issue of the Socialist Standard

Hitler knows well how to use the demagogic arts to attract and inflame his audiences. He is the typical “hero as gasbag" which is what the majority of electors at present require of their political leaders. Yet in the mass of chaff, there are grains of sound criticism of the existing economic system and its institutions. He is contemptuous of the snobbish and limited outlook of many University professors and Government officials, and rightly despises much of the useless learning with which their heads are stuffed at schools and colleges. As he says, the high school system is largely organised to insert mechanically just that kind of book learning which will enable the pupils to pass civil service and other examinations, and most of it is of little use afterwards. He also derides the cash basis of personal estimates: “In these days whole hosts of people have no other standard of measurement for each other than their salary scales.”

One cannot help being struck by the fact that although Hitler constantly denounces Marx and Marxists, his criticisms of the school system are very much like those to be found in Marx’s writings. It is an amusing thought that Hitler’s diatribes are probably based on what he picked up from Marx’s works, and as in his youth Hitler was associated in Vienna with an Austro-Marxist group, it is quite possible.

On the other hand, nothing demonstrates more clearly the ignorance or dishonesty of the Nazi leaders than their description of the German Social Democrats and Liberals as “Marxists.” Anyone who knows what the Social Democrats thought and did, knows that knowledge of Marxism played very little part in the practical aims, policy and organisation of their movement. They repeated Marxist phrases and professed adherence to Marxist principles, but this had little more influence on their conduct than the profession of Christianity has on the policies of the governments of Christian Europe and America.

How ill-informed or ignorant the Nazis are can be seen in Dr. Eismann. He is a learned writer’ on political affairs, and “proves,” in an article in a journal of public administration (“Beamten-Jahrbuch,” Berlin, October, 1933) that the British Labour Party is Marxist. His proof takes the form of the assertion that Marxism has been instilled into the Labour Party by the Social Democratic Federation, the Socialist Labour Party and the I.L.P.! He evidently does not know that the S.L.P. is dead except for one or two moribund groups, and that it was opposed to the Labour Party and was never affiliated to it, and had little or no influence on it, and that its Marxism was always tainted. He does not know that the I.L.P. was born, and in turn helped to give birth to the Labour Party, not as a Marxist, but as an anti-Marxist party, and that it has never been anything but a radical-reformist organisation, occasionally flirting with Marxism without ever understanding it. The S.D.F. was an active party before the Labour Party was born, but has never exercised any great influence, still less any great Marxist influence. It also is now nearly dead, and its Marxism was even more tainted than that of the S.L.P.

Dr. Eismann may be forgiven for not knowing these facts, for he may have been misled by the rubbishy histories Written by muddle-headed Labourites in this country. That excuse cannot, however, apply to his belief that the Labour Party is going Marxist. If he knows anything about Marxism, he must know that the Labour Party is no more a Marxist party than the National Government Party now led by MacDonald, the former leader of the Labour Party.
Posted by Imposs1904 at 8:32 AM

Jesus Christ, this editorial doesn't cover itself in glory. A rather naive estimation of the newly enthroned Hitler.