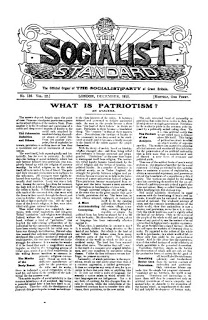 Pamphlet Review from the December 1915 issue of the Socialist Standard

If the above-quoted phrase were mentioned to a Socialist in "peace" time or in war time his (or her) mind would immediately incline toward a consideration of the capitalist class. An anti-Socialist would obviously place a different construction upon the phrase from that placed upon it by a Socialist.

That this is so is apparent from a pamphlet, bearing the title : "Our Enemy at Home," issued by the Anti-Socialist Union, and the authorship of which is claimed (or admitted) by a Mr. Cecil Shirley. The cover is a colourable imitation of that now familiar eye-sore, khaki, and it bears two crossed Union Jacks on a white background—the latter symbolical of purity, and the former of—England.

The pamphlet is ostensibly an exposure of Socialist activities during the present war, but the "Socialist" character of the activities exposed can well be measured when it is discovered that the sources of the majority of the extracts are given as "The Daily Herald," "The Labour Leader," "The New Statesman," and “Forward." Some of these papers may be anti-war in character, but they do not thereby assume a Socialist aspect, just as a hatred of pork does indicate an adherence to vegetarianism. Two extracts are given front the Socialist Standard, as a saving grace, presumably.

The author's knowledge of and acquaintance with Socialism is admirably illustrated by the following gem, which appears on the title page:

The Socialists demand that the State should provide them with all the necessaries of life.
Yet the Socialists are the least willing to help the State when its very existence is threatened.
The Socialist idea of Patriotism seems to be to obtain as much as possible from the State, but to give nothing.

In view of this the person who induced Mr. Shirley to pose as a pamphleteer against Socialism has a heavy responsibility lying at his door. Much water has flowed under Westminster Bridge since Louis XIV remarked "The State: I am the State"; but that the introduction of Socialism means the disappearance of the State is a truism for all who have taken the trouble to understand the meaning of the terms "State" and "Socialism." From this it will be seen that to talk of Socialists demanding benefits FROM the State would be on a par with a demand that the "No Lights" order should be applied to the harvest moon. All that Socialists demand OF the State is its supersedence by Socialism. Simply that and nothing more.

The head and front of our offending seems to be that we have remained Socialists during the war. Therein lies our crime. Had we fallen into line with the great political parties as regards the war, our peace-time transgressions could all have been forgiven. The pamphlet says (p. 20) : "All honour lo those Socialists who have put the claims of their country before those of their political doctrines." Mr. Shirley has been at great pains to discover that which is self-evident, namely, that Socialists are not patriotic. Dr. Johnson has laid it down that patriotism is the last refuge of a scoundrel, and it is to be hoped that the learned lexicographer will not turn in his grave when I add that it is the first refuge of a capitalist.

At the outbreak of the war much was heard of the political truce and the united front, which front, incidentally, has been well laundered with the soft soap of orthodox politicians. This political truce resulted in the formation of the Coalition Government and merely means that the two political parties of employers have agreed to see the war through to a fitting conclusion, the time for and fitness of such conclusion to be adjudged by them. Their one-time implied understanding has yielded place to an open and avowed coalition. The traitors and traffickers in dishonour of yesterday have become the patriots of to-day. It is still "Business as usual," but no longer under the guise of "It is the duty of the Opposition to oppose." Mr. Shirley complains (p. 20) that "Socialists advocate politics as usual." Had we, as Socialists, decided to side with the liberal or Tory patriots we would have reaped a harvest —and a whirlwind. We could have been patriotic, but hear let the late Lord Roberts speak. I quote from his “Message to the notion” (1912). On page 43 he said : "The conditions amid which millions of our people are living appear to me to make it natural that they should not care a straw under what rule they may be called upon to dwell, and I can quite understand their want of patriotism."

And again on pp. 44 and 45: "Yet recent unimpeachable evidence makes it clear that, to tens of thousands of Englishmen engaged in daily toil, the call to ‘sacrifice' themselves for their country must seem on insult to their reason ; for those conditions amid which they live make their lives already an unending sacrifice.” Thus the late Lord Roberts — a patriot whose integrity Mr. Shirley will not question. It it the "unimpeachable evidence” and the causes thereof that have given ground to the Socialist attitude of which our pamphleteer complains, which give rise, in fact, to the whole Socialist propaganda. Remove them, and there will be no anti-Socialist complaints, for there will be no anti-Socialist to complain.

The pamphlet gives two extracts from the Socialist Standard, as follows : "The working class is not in our masters' schemes except to afford the latter riotous luxury and, in time of war, providing food for cannon" (July 1915) and "Having no quarrel with the working class of any country, we extend to our fellow workers of all lands the expression of our goodwill and Socialist fraternity, and pledge ourselves to work for the overthrow of capitalism and the triumph of Socialism” (September 1914). Of these extracts, needless to say, we are unashamed. And strange though it may seem in the circumstances, both the quotations are verified at the sources given.

We are told (p. 26) : "But the opponents of Socialism can never forget what has been done and said by so many Socialists at a time when the country and the Empire were struggling for their very existence,” and again (p. 28) ‘‘Patriots one and all . . . will certainly remember what has been mud and written during these critical times by Our Enemy At Home." This remembrance will serve its purpose (if it comes to pass), and it is as well that the extracts from our paper are recorded, for in the future we need to justify our attitude, not in the eyes of the capitalist class, but only in those of the working class. It is hoped that these foreshadowed memories will be active when the present awful holocaust has ended. And not only this, but those patriots who are to-day so smitten with war-fever may remember also what has been said by their present day friends. The promises made; the attractions offered; the glittering appeals; the honourable thoughts: let these be remembered and contrasted with the conditions which will then be experienced.

Mr. Shirley goes into the questions of pre-war diplomacy, of opposition to recruiting, of Socialists’ sneers at Belgium. He protests against jeering at the German atrocities, forgetful that the war is in itself, one huge atrocity—a necessary concomitant of that human bane called capitalism. Against the Socialists be uses all those weapons that are to-day used by each sect against all others because they do not see eye-to-eye on certain war transactions. Against the Socialists these weapons fail. The powder is wet or else the gun has a faulty bore.

Our attitude, from a working-clam standpoint, will bear the light of day and the test of time and truth. Were we to hang our beads in shame at what we have said and done our opponents would immediately be half-victorious. But we are not ashamed; we glory in the fact that during one of the greatest catastrophies that has yet overwhelmed mankind, we nave kept our heads—and our feet; we have remained true to our principles. The war is not yet over, and our victory has not yet come, but our present attitude augurs well for the future. and it is the consciousness of this that disgruntles the capitalist Shirleys.

Perhaps, after the war, one bright little urchin will approach our pamphleteer with the well-rehearsed question : "What did you do, Daddy, in the great war?” and Daddy, filling hit chest with pompous pride, might reply : "I wrote a pamphlet. I helped to crush Prussian militarism by telling Socialists that which they already knew and convincing those who were never in doubt”

I'd love to read this pamphlet but I can only find one - ONE - reference to it on the internet. (Some obscure library catalogue). So, at least I know it exists.